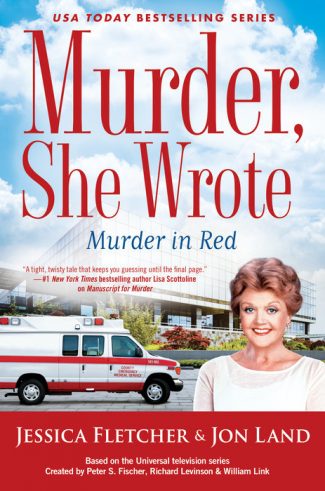 Murder, She Wrote: Murder in Red

In Murder, She Wrote: Murder In Red, Jessica Fletcher loses a loved one to unnatural causes and sets her sights on the mysterious local hospital before more people wind up dead on arrival…

Like millions of other mystery lovers worldwide, I grew up watching and enjoying the television classic Murder, She Wrote starring the delightful Angela Lansbury as our mystery author-turned-sleuth, Jessica Fletcher. While I knew that there were a number of bestselling novels that had been published based on the TV show, I had no idea that with Murder In Red there are now 49 books in the series!

And what an engrossing series it is, taking our heroine all over the world to solve murders and make friends along the way. One of these friends, Chief Inspector George Sutherland of Scotland Yard, is actually coming to Jessica’s hometown of Cabot Cove, Maine to enroll in clinical trials at the nearby Clifton Care Partners private hospital. This new medical establishment promotes cutting edge therapies in wellness and rejuvenation that seem almost too good to be true… at least if one goes by the opinion of local doctor Seth Hazlitt, who finds himself losing more and more of his patients to the shiny new clinic.

At first, Jessica is thrilled to hear that George, the only man she’s dated since the death of her husband, is coming to town. But when her favorite gin rummy partner, Mimi Van Dorn, suffers a seizure and dies while under the care of Dr. Charles Clifton himself, Jessica begins to sense that not all is as it seems with the hospital named for him. As she investigates further, she discovers a tangled web of lies and cover-ups that not only stretches back decades but also threatens the people she loves today.

The most affected, of course, is George, who has checked in with a seemingly incurable disease that only Clifton Care Partners has the experimental therapy for. The more Jessica learns about the clinic, the more desperate she becomes to persuade George to leave the program, but he’s proving remarkably stubborn, even going so far as to say:

“Would you be terribly disappointed if I told you I can’t let myself be bothered with such things right now?”

“There’s something wrong with this place,” I said, trying not to sound as if I was pleading.

“Perhaps, but there’s also something wrong with me.”

“There must be other options,” I groped.

“I’ve done the research, my dear lady. There aren’t. This is it, all that stands between me and–”

I felt my throat constrict. “Don’t say it, George.”

He rocked his chair all the way forward, leaning close enough to reach out and take my hand. “And you need to trust me.”

The fear of mortality can blind even the most stoic of us, and Jessica soon finds herself fighting back panic as well as criminal conspiracies in order to save the man she might have come to love.

I can already hear some of you saying, “What?! Jessica in love again?!” Never fear, devoted fans of the TV series (book fans will have had 49 books to get used to the idea): while Murder In Red does explore new future avenues for Jessica, this tale is still very much grounded in the canon we know and love. Jon Land continues to gently expand the series in such a way that the changes feel both gradual and natural. From the recurring cast of beloved characters to the occasional reference to established history, this is very much a book that respects its origins, while also providing an uncanny continuation of Jessica’s narrative voice:

I had dabbled in writing before my husband Frank’s death, but I didn’t actually write my first book, The Corpse Danced At Midnight, until then. I started it mere days after his funeral, I thought both to honor his longtime advice to go after my dream and to distract from my grief. Now I realize that I turned to writing to create a world that was mine to control, where I’d no longer feel weak and helpless as I did with Frank’s illness and ultimate passing. Trying to do the same in real life, I suppose, was just a natural progression.

Honestly, it was like hearing Ms. Lansbury in my head the entire time I was reading this book, which is one of the highest compliments I could possibly pay a novel like this. Mr. Land’s ear for capturing the thoughts and speech patterns of our 60-something sleuth is impressive. Reading this novel was about as close as one can get to enjoying the series without actually turning on the television, and I can’t recommend it to fellow fans highly enough.