March 29, 2022
Read on as Jess Montgomery, author of The Echoes, writes about the mother-daughter relationship that inspired this latest installment in the Kinship series.

BONUS: Comment on this post after you read to enter for a chance to win a hardcover copy of The Echoes!

All the titles in my Kinship Mystery Series, inspired by Ohio’s true first female sheriff in 1925, have co-narrators. In each novel, Sheriff Lily Ross shares her investigations from her point of view. She’s joined by a co-narrator in each novel who might just have a different perspective on Lily and on Lily’s case and, depending on the co-narrator’s motives, might either try to help—or thwart—Lily’s efforts. So far, Lily’s co-narrator’s have been a stranger who becomes a new friend, a friend from childhood, and a ‘frenemy.’ (Yes, I know, the term didn’t exist in the 1920s, but it still perfectly describes Lily’s co-narrator and nemesis in the third novel in the series.

In the background throughout all of these novels has been Lily’s Mama, a.k.a. Beulah McArthur—sometimes helping, sometimes fussing, and often shaking her head at Lily’s shenanigans.

As I began planning the plot for The Echoes (yes, I’m a plotter!), I knew I’d again need a strong co-narrator for Lily. Almost immediately, I thought—Mama! My next thought: but she’ll narrate as Beulah McArthur.

Beulah is quite comfortable in her role as Mama, to Lily, to her now-deceased son Roger, and to young Caleb Jr., who happens to be 7 years old, just like Lily’s youngest child. And she’s also at ease in her role as grandmother (or Mamaw, as her grandchildren call her) to Lily’s daughter Jolene and son Micah.

But of course, Beulah is more than those roles. She has her own dreams and worries and point of view. In The Echoes, we get to know her more fully—what makes her tick. What secrets she might be keeping. A romantic interest… but I don’t want to give away too much!

As I wrote The Echoes, I realized that to date, I’d shown Beulah as well, a little fussy. A worrier. She’s proud of Lily, sure. Lily and Beulah are close enough that by the time The Echoes opens, they share a farmhouse. Beulah watches the children when Lily must be out on cases. But Beulah isn’t entirely at ease with Lily being sheriff. There’s a bit of her that finds the job unsuitable for a woman (bear in mind that Beulah was born in 1880), and certainly she wonders why Lily must do something so dangerous.

In The Echoes, I wanted to show Beulah with more depth. She becomes caught up in Lily’s case, partly because it’s connected to their family. The plot is driven, to a great extent, by what really happened to Roger—Lily’s older brother and Beulah’s son—during The Great War.

I also wanted to explore the mother-daughter dynamic from both a mother’s point of view, and a daughter’s point of view. In so many ways, I relate to Lily’s desire to move beyond the strictures of expectations of women as represented by her mother, and I believe I’ve brought that out in past novels. In an earlier novel, Beulah reminds Lily that she may be sheriff, but she’s still expected to enter a pie in the county baking contest. Lily grudgingly complies—and enters a vinegar pie. (In all fairness to vinegar pies, if properly prepared, they taste tart like a lemon pie. But I digress.)

And yet, I also relate to Beulah’s complex regard for her daughter Lily: proud, yet always a little worried. I’m the mother of two adult daughters, and I’m super proud of both of them. I admire them and all they’ve achieved, and I’m inspired by their bravery in their professions and in their avocations. On the other hand… a mama worries. (Anyone who has attended their child’s rugby match—as I have—will understand. On the one hand, complete admiration for toughness and skill. On the other, barely suppressed cringes each time it looks like your daughter might get even the least bit injured.)

Lily and Beulah ultimately work together to resolve the crimes and issues in The Echoes. Beulah comes to understand Lily’s drive, how she’s seen in the community, and the unique skills Lily brings to her work. Lily comes to understand Beulah’s worries, strengths, and wisdom. Both women learn to appreciate and love each other even more deeply than they did before. What more could a mother-daughter duo ask for?

The Echoes Comment Sweepstakes: NO PURCHASE NECESSARY TO ENTER OR WIN.  A purchase does not improve your chances of winning.  Sweepstakes open to legal residents of 50 United States, D.C., and Canada (excluding Quebec), who are 18 years or older as of the date of entry.  To enter, complete the “Post a Comment” entry at https://www.criminalelement.com/mothers-and-daughters-inspiration-for-the-echoes/ beginning at 12:00 p.m. Eastern Time (ET) March 29, 2022. Sweepstakes ends at 11:59 a.m. ET April 12, 2022. Void outside the United States and Canada and where prohibited by law. Please see full details and official rules here. Sponsor: Macmillan, 120 Broadway, New York, NY 10271. 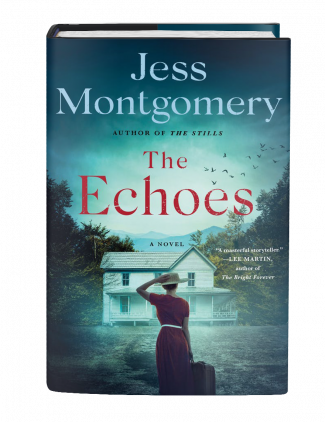 About The Echoes by Jess Montgomery:

As July 4, 1928 approaches, Sheriff Lily Ross and her family look forward to the opening of an amusement park in a nearby town, created by Chalmer Fitzpatrick—a veteran and lumber mill owner. When Lily is alerted to the possible drowning of a girl, she goes to investigate, and discovers schisms going back several generations, in an ongoing dispute over the land on which Fitzpatrick has built the park.

Lily’s family life is soon rattled, too, with the revelation that before he died, her brother had a daughter, Esme, with a woman in France, and arrangements have been made for Esme to immigrate to the U.S. to live with them. But Esme never makes it to Kinship, and soon Lily discovers that she has been kidnapped. Not only that, but a young woman is indeed found murdered in the fishing pond on Fitzpatrick’s property, at the same time that a baby is left on his doorstep.

As the two crimes interweave, Lily must confront the question of what makes family: can we trust those we love? And what do we share, and what do we keep secret?