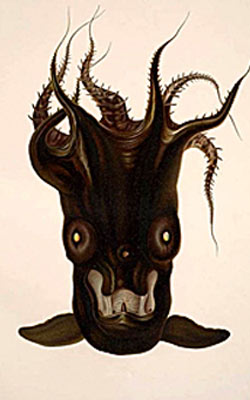 “A very small but terrible octopus, black as night, with ivory white jaws, and blood red eyes,” is how William Beebe described the Vampire Squid (Vampyroteuthis infernalis) in 1926. Being that Beebe was a famous naturalist and deep-sea explorer, no one was really in a position to argue with him, although in this case he was pretty much wrong on all counts about the poor little Vampire Squid.

Yes, it has a face only a mother could love, but it’s not “terrible” and according to recent research from the Monterey Bay Aquarium in California, the Vampire Squid lives 2,000 to 3,000 feet underwater and feeds mostly on dead stuff it finds floating around and almost never on live prey. Gross, but not terrible. Poor little guy.

The illustration above comes from a series of scientific surveys conducted by Prince Albert I of Monaco in 1889, now in the holdings of the Smithsonian Institution Libraries.

The ZINNG: A Cool $25K for E-Mysteries (and Lethal Selfies)

The new Mysterious Press Award honors “the best e-book original mystery novel“ with a cool $25k and worldwide distribution! We read about it at The Rap Sheet, where there are loads more details. Submissions begin in January! ”Over at Jungle Red Writers, Julia Spencer-Fleming explains why Archer Mayor is ”the mystery writer's mystery writer” and…