Michelle McNamara, I’ll Be Gone in the Dark, and the Capture of the Golden State Killer

May 3, 2018
After 42 years of searching for America’s most prolific criminal, what we thought previously impossible has finally happened. The suspect known as the East Area Rapist, the Original Night Stalker, and finally as the Golden State Killer has been identified and arrested this week. 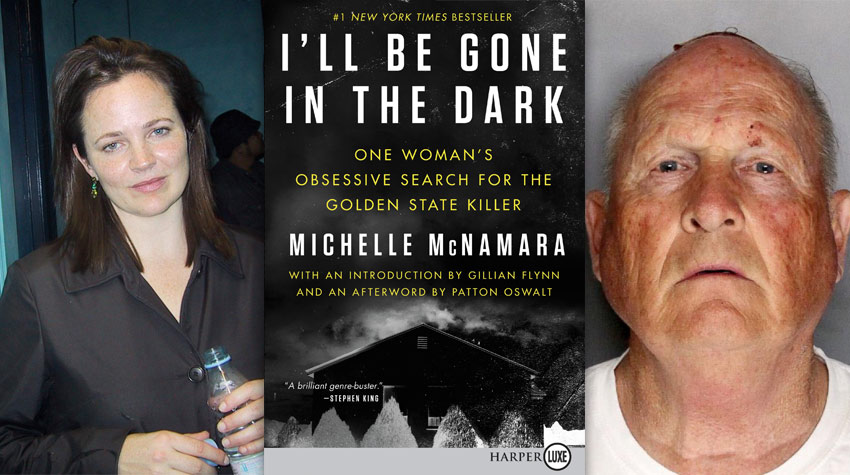 When news broke that the Golden State Killer had been arrested, the true crime community was shaken and elated, and of course, all thoughts turned to one woman: Michelle McNamara, whose recently published, ground-breaking work of investigative journalism, I’ll be Gone in the Dark: One Woman’s Obsessive Search for the Golden State Killer, reinvigorated a community and returned the killer to the public conscious. It’s a bittersweet victory, however, as Michelle did not live to see the case to the end. She died in her sleep on April 21, 2016.

I’ll be Gone in the Dark is an incredibly well-researched and thoroughly told map of the crimes linked to EAR/ONS/GSK. But it’s not just the analytical coverage of a killer. It’s also a very empathetic look at the victims, their families, and the long-term destruction GSK wrought on their lives. Forty-two years was a long time to wait for peace and justice, but now those who were affected are able to rest easy. Joseph James DeAngelo, 72, is now awaiting trial in a Ventura County jail.

The unidentified murderer is always twisting a doorknob behind a door that never opens. But his power evaporates the moment we know him. We learn his banal secrets. We watch as he’s led, shackled and sweaty, into a brightly lit courtroom as someone seated several feet higher peers down unsmiling, raps a gavel, and speaks, at long last, every syllable of his birth name.

Who is Michelle McNamara? Her name is one that those in the true crime community have been familiar with for some time thanks to her blog True Crime Diary, but the broader public may only know her as Patton Oswalt’s late wife. Her name has bubbled up to the surface of our greater conscious when her book, I’ll Be Gone in the Dark, was completed from her notes by her researchers and close colleagues, Paul Haynes and Billy Jensen, and very recently published with the help of Oswalt. But her obsession with the Golden State Killer, a nickname she herself coined in some of her earlier writing, did not begin with this book. The book itself merely documents her obsession and gathers together all of her prior research and her prior writings, putting together a complete picture of not only who GSK might be but also who Michelle was and why this case was important to her.

In the recent days, we haven’t learned much from police about Joseph James DeAngelo that we didn’t already know or suspect prior to his capture. And it’s important to note that though Oswalt credits Michelle for “getting him,” her book did not bring any new evidence to light. What it did, however—along with her other previous writing on the subject—was bring this old case back into the light, encouraging investigators and the public to keep tabs on it, follow every lead, and call in every tip. But ultimately, it was the work of Paul Holes, the now-retired police investigator who stayed on this case for the entirety of his two-decade-long career with the Contra Costa Sheriff’s Department, that tied the East Area Rapist’s crimes to that of Southern California’s Original Night Stalker killings. And it’s his work that did ultimately lead to the arrest of DeAngelo.

Michelle would be pleased, I think. At the end of the book, she writes GSK a letter—one wonders if he’s read it. She quotes the famous words he said to his victims while threatening them with a knife: “You’ll be silent forever, and I’ll be gone in the dark.” When we didn’t know who GSK was, these words were chilling as the only physical piece of him that we had. His voice, that distinctive raspy whisper. But Michelle knew that it was only a matter time before he’d be caught. Technology and DNA are too advanced now. And she knew it wouldn’t be long before he had to step into the light.