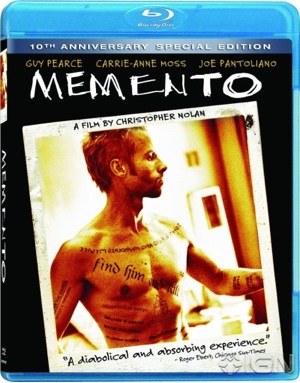 This year marks the ten year anniversary of Christopher Nolan’s breakthrough second feature, Memento. In February, the film had a limited re-release in selected theaters as well as a new release on Blu-ray. Nolan’s film made a splash because it matched an original idea (a man with short-term memory loss hunts for his wife’s killer) with the inventive editing technique of telling the story backwards. But while Memento announced Nolan as a major new talent, it’s worth noting that “Amnesia Noir” has a long history.

In fact, plots about memory-loss go back to the beginning of classic noir. It seems like every third film of the era involved some variation on memory loss. By forcing their bewildered protagonists to stumble through complicated plots without the aid or comfort of memory, amnesia stories went right to the anxiety and confusion at the heart of the genre. Here’s a brief look at some of Memento’s forgetful forbearers.

1. Street of Chance (1942)-One of the earliest noirs was this gritty little adaptation of the Cornell Woolrich novel The Black Curtain. It stars a young Burgess Meredith (thirty-four years before he hit it big in Rocky) as a man who awakens after an accident only to discover that he has been missing for a year from his home. Where has he been and why is he now wanted for murder? His search for answers leads him to sexy Claire Trevor. She knows everything, but she’s not telling. Hard to find but worth the search. 2. Spellbound (1945)-Early on in Alfred Hitchcock’s American career, the Master of Suspense made this thriller starring a young Gregory Peck as an amnesiac murder suspect and Ingrid Bergman as the valiant psychiatrist trying to help him find the real killer. Hitchcock warred with producer David O. Selznick over the script—Selznick insisted on a lot of expository psychobabble—so the results are a mixed bag. Still, the film is well worth seeing and features not-to-be-missed trippy dream sequences designed by Salvador Dalí.

3. Somewhere in the Night (1946)-A standard plotline in Amnesia Noir is the shell-shocked veteran who wakes up in a military hospital after a grenade blast with no memory and is sent back to the states to try and figure out his past. Invariably, he discovers that he was at the center of some criminal enterprise before he left for war. Starring John Hodiak (a frequent, if decidedly un-dynamic, noir performer) Somewhere in the Night doesn’t do a whole lot to distinguish itself from the competition, but it hits all the right notes. Available on DVD from Fox, make sure to check out the always-fantastic commentary by noir historian Eddie Muller for a further introduction to Amnesia Noir.

4. The Crooked Way (1949)-Another shell-shocked veteran, another hazy criminal past. Star John Payne may have started out as a pretty boy in musicals in the thirties, but when he switched to crime pictures in the late-forties he specialized in ass-kicking. He makes for a spunkier hero than Hodiak, and the film gives him plenty of opportunity to thump skulls. The movie also co-stars a psychotic Sonny Tufts and the always creepily entertaining Percy Helton.

5. High Wall (1947)-Somewhat derivative of Spellbound—another sympathetic female psychiatrist aids another murder suspect who can’t remember if he’s guilty—but with a style and feel all its own. Noir goddess Audrey Totter, so often cast as the sexy bad girl, gets to play the heroine while Robert Taylor tries to remember if he murdered his wife or not. With superb cinematography from Paul Vogel, this one’s an overlooked little gem. 6. The Long Wait (1954)-Adapted from the novel by Mickey Spillane, this rough-and-tumble flick stars Anthony Quinn as a man who survives a car wreck only to find himself memory-free and at the center of a murder investigation. This one’s not great, frankly. The filmmakers would have been better off sticking closer to Spillane’s original plotline (which gave the main character more back story), but the film does have two secret weapons which make it worth seeing. One is cinematographer Franz Planer (99 River Street) whose work here is eerily beautiful—particularly a bizarre torture sequence toward the end. The other is Peggie Castle, a now-forgotten noir goddess who improved every movie she appeared in.

7. The Dark Past (1948)-What if the memory loss isn’t caused from a conk on the head but rather a long-repressed traumatic experience? William Holden stars as an escaped convict who takes psychiatrist Lee J. Cobb hostage in a secluded cabin. Cobb takes one look at Holden, diagnoses a troubled childhood, and embarks on a little memory recovery. Let the healing begin! The psychobabble drags, but director Rudolph Matè (D.O.A) piles on enough freaky dream sequences to make give Spellbound a run for its money.

8. Blackout Noirs-These are noirs where someone wakes up from a hard night of boozing, usually to discover that they somehow ruined their lives the night before (Cornell Woolrich loved this particular plot—probably, one suspects, because he lived it every morning). Examples of Blackout noirs include: Deadline at Dawn, Fall Guy, Night Without Sleep, and Black Angel.

9. A Double Life (1947)-An odd addition to the Blackout Noir sub-subgenre, this rare thriller from director George Cukor stars Ronald Coleman as an actor who becomes submerged in the lead role of a stage production of Othello and commits a murder while lost in the part. If you’re two people, how can you remember what the “other you” did last night? In the portrayal of an artist losing their mind to art, this film predates Black Swan but works the same emotional territory.

10. Mulholland Dr. (2001)-We should remember (ahem) that the same year Memento hit screens, David Lynch released this brilliantly twisted drama, replete with neo-noir touches including a protagonist who awakes in the first scene with no idea of who where she is. Lynch’s best work and a fine counterpoint to Memento's testosterone. Everyone loves a good suspense film. The Girl on the Train and Gone Girl are two of the best and most interesting mystery films of the last few years, grossing nearly $140 million between them. The casting of these two films—Emily Blunt, Justin Theroux, and Alison Janney in Train and Ben Affleck and Rosamunde Pike…