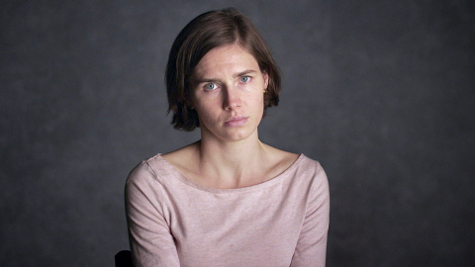 Did she get away with murder? Or did she simply get caught in the line of fire? Don’t expect answers to such direct questions from this Netflix Original Documentary.

Key people who were involved with the case are interviewed, and they have a way of circling the query on everyone’s mind with double responses. A makeup free, cropped hair Amanda Knox sits in a stark setting for the film’s opening and delivers a provocative statement: “If I am guilty it means that I am the ultimate figure to fear. Because I’m not the obvious one. But on the other hand, if I’m innocent, it means that everyone is vulnerable … Either I’m a psychopath in sheep’s clothing, or I am you.”

But an answer to the guilty or innocent question wasn’t necessarily the point of this documentary. It’s about the monster that was created in the wake of botched police investigations and in the avalanche of unbridled media attention. Other interviews with the lead prosecutor Guiliano Mignini, journalist Nick Pisa, and a defense attorney for Rudy Guede all provide insight into the hidden agendas of people doing their jobs without giving much thought to the lives that lay in their hands. Either the opportunity to advance a career is more important than getting to the truth, or they’ve become stuck too deep in a rut that they can’t see the evidence in front of them. In Guiliano Mignini’s position, he admits to the pressure from the public and the press to find the culprit(s) responsible for the heinous crime. He talks about his love for investigating, detective fiction (an avid Sherlock Holmes admirer), and the respect he received from the Perugia community as the trial proceeded following the initial conviction of Amanda and Raffaele Sollecito. A video clip plays of Mignini outside the courthouse smoking a pipe—shades of the great detective from 221B Baker Street—hammering home the point. Like a pit bull, he latched on to Amanda as a suspect and didn’t let go, entertaining all sorts of scenarios that led to the murder of British student Meredith Kercher.

The media is much easier to place some culpability on—especially when one of the leading reporters, Nick Pisa, who was working for the Daily Mail, has a near hard-on over reporting on the case, going so far as to mention Woodward and Bernstein. He deflects some of the nature of the shoddy, sometimes seedy, work back onto the police and other sources that had leaked information, some of it bad information, because who has time to fact check when there is a public waiting that can’t seem to get enough of sex and murder, especially when another news outlet may beat you to the scoop.

When Rudy Guede’s defense attorney is asked if he thought he did a good job defending his client with a fast-track trial, he replies with a snippy, “Go ask the others.” No one showed up when Guede, a burglar who had been known to the police, was hauled out of the courtroom in handcuffs for murdering Kercher. It wasn’t sexy enough to sell newspapers.

Ultimately the Italian supreme court found “glaring errors” and that a “whole truth” was not satisfied in a damning 52-page report. It would seem that the documentary visibly presents the “chaos” as a swarm of individuals buzz about the apartment where the 21-year-old’s lifeless body was found.

Yet, the camera is a funny kind of witness because we are seeing what the filmmakers want us to see, I have no clue as to who these particular professionals are in these clips, though, it looks bad as they mill about—some not changing their gloves or booties, some not wearing them at all, and one is shown smashing through a glass panel of a door. Not good form when trying to preserve a crime scene. Also, it was revealed that when Amanda was in prison, she was told that she had HIV to try and wheedle some information from her. Then, her private journal listing her sexual partners, all seven, was leaked from prison.

Does the documentary succeed in turning the tables, vilifying the investigators and the media, those responsible for creating monsters out of Amanda Knox and Raffaele Sollecito? I think so. And Amanda herself makes a strong case for innocence when she says, “What’s more likely? That I get together this boyfriend that I’ve had and this guy who I don’t even know his name, tell them to rape my roommate and then let me stab her to death, or that a guy who regularly committed burglaries broke into my home, found Meredith, took advantage of her, killed her and ran off—a burglary gone wrong.” I’m still not 100% sure what happened that night, but I can be sure of this: we’ll never know. As humans, we rely on visual cues to help us perceive certain situations. In Amanda’s case, when we look into those blue eyes—those eyes that are “not objective evidence”—her seemingly “strange behavior,” which at times comes across as a coldness, compounded with the obvious intellect of an articulate individual leaves an ambiguous feeling left behind, which didn’t help her own case.

The biggest lesson for all of us watching or reading the news: while we can make all the judgments we want, in the end, we only know what we are told by the media, which is fed to them by authorities and their “sources.” Perhaps a more profound question might be: Is it for us to decide? While it’s okay to have an opinion, declaring a “verdict” without knowing the facts is not. And yet, that’s what happens in these media feeding frenzies that report crime cases to us.