Having recently finished The Nine Tailors, Dorothy L. Sayers’ golden age whodunit, I had a small epiphany during the re-shelving process. I realized that I have quite a lot of numerically titled mysteries in my collection. Well, friends, my epiphany is your epiphany. For no reason other than whimsy (not to be confused with Lord Peter Wimsey) I give you here a list of mysterious novels and stories whose sole common denominator is that each has a digit in the title. As it worked out, the Brit authors outnumber the Yank ones three to one. Most of these tales date back several decades, and while many fall on the classics side of the genre; a couple are more obscure. From one to ten, allow me to enumerate: 1) The No. 1 Ladies’ Detective Agency. Before dipping into the past, we’ll start off with a modern offering. Penned by Scottish writer Alexander McCall Smith, this popular series kickoff introduces the resourceful Mma Precious Ramotswe. As the first female private eye in Botswana, Mma Ramotswe plies her trade with pluck, persistence and empathy. Her sign claims “Satisfaction Guaranteed for all Parties” and she aims to please. Precious’s caseload includes con-men, missing persons, and witch doctors, all against the backdrop of Africa’s distinctive landscape and culture. Her Number One is our Number One. 2) “Two Bottles of Relish.” Filling our number two spot, we have a shivery short story by Lord Dunsany. (Just so you know, besides being an Irish nobleman and prolific writer, Dunsany was a national pistol-shooting champion, chess master, and president of the Royal SPCA—for his time, he might have been the Most Interesting Irishman in the World.) Written in 1936, “Two Bottles” features a supposed homicide, a missing body, and an outrageous exit line. Alfred Hitchcock claimed he always wanted to film it for Alfred Hitchcock Presents, but that the sensibilities of late‘50s/early 60s television wouldn’t allow for such macabre fare. (How’s that for a teaser?) I have a vague (perhaps false?) childhood memory of seeing Ol’ Hitch telling a truncated version of the tale on Johnny Carson’s show.

3) The Three Coffins by John Dickson Carr. Some years back, this 1935 novel (aka The Hollow Man) was selected by an expert panel as the best locked room mystery of all time. Easy to see why. Especially famous is the “locked room lecture,” in which the book’s sleuth, Dr. Fell, gives a lively discourse on various methods of committing murder in an impenetrable space. The narrative boasts masks, mirrors, misdirection…oh, and coffins. Yep, three of ‘em. 4) The Four Just Men by Edgar Wallace. In 1905, Wallace put out this suspense novel through his own publishing company, promoting it with a widely-advertised contest throughout Britain. Whoever guessed the book’s murder method would bag a hefty prize of £1,000. Long story short: through a series of snafus—including lack of a limitation clause in the rules—the competition produced multiple winners and cost Wallace far more than his intended payout. Despite its bankrupting origins, The Four Just Men is a spry little book, which spawned several successful sequels. The titular gents are a quartet of stealthy, well-to-do vigilantes who decide to right the world’s wrongs with a series of assassinations. And the prize-spawning solution is, indeed, rather ingenious. 5) “Five Orange Pips.” Another short story, this one featuring none other than Arthur Conan Doyle’s beloved beekeeper. Conan Doyle himself rated this as one of his very best Sherlock stories. Holmes tackles a mystery with roots in our own Civil War, and the modern American reader may have an advantage over the Victorian English one in unraveling the clues. Never have citrus seeds been so sinister. 6) “The Adventure of the Six Napoleons.” While we’re in the neighborhood, let’s stop in at another Holmes short story. Personally, I think Conan Doyle should have named this one “The Case of the Busted Bonaparte Busts.” Because that’s what it’s about…and because I’m a slave to alliteration. Is a Napoleon-loathing vandal on the prowl or is the solution something more complex and lethal? 7) Seven Suspects by Michael Innes. Another Scottish scribe, another locked room riddle. Innes (née J. I. M. Stewart) was a longtime university professor, and he mines that experience in this 1936 whodunit (also known as Death at the President’s Lodging.) This was the first of the popular John Appleby series, which was to stretch into three dozen titles. In this puzzler, the urbane inspector tackles a case involving an ancient school (modeled on Oxford), an impossible murder, and a clutch of colorful suspects. I forget how many. 8) And on the Eighth Day by Ellery Queen. The author “Ellery Queen” is a swirl of pseudonyms, ghostwriters, and offshoots. It’s also the name of the series detective. In the midst of all this, we have our Number 8 entry. And on the Eighth Day was ghostwritten in 1964 by Avram Davidson, an established mystery and fantasy writer, based on an outline by Frederic Dannay, one of the two Brooklyn-born cousins who created EQ.  A very off-the path Ellery Queen plot—literally. After taking a wrong turn while driving across a dessert, Ellery encounters a hidden religious community of robed men, seemingly lost in time.  A weirdly compelling addition to the EQ oeuvre. 9)  The aforementioned The Nine Tailors. The title refers to the traditional number of bells tolled to acknowledge a man’s death. Dorothy Sayers delves deep into the age-old art of bell-changing, and Lord Peter is at his best as he investigates why an extraneous corpse showed up in a church graveyard. While all the bell lore might be a bit much for some readers, the village setting is appealing, the resolution unique, and the climatic flood exciting. Rind-a-ding-ding! 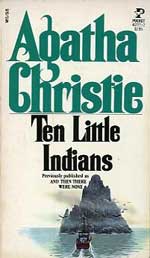 10)  As a longtime Agatha Christie fan, what possible choice could I make for my tenth slot but Ten Little Indians?  You know the drill—a summoning of strangers, an unseen host, a secluded island, and a spate of rhyme-induced killings. Tell me, since it also goes by the title And Then There Were None, can this selection double as my Number Zero?

As must be obvious, my bookshelves are stuffed with a disproportionate amount of dead authors. No doubt I’ve overlooked a platoon of au courant mysteries that meet the numerical criteria. Feel free to add to the madness here with all those titles I left out…and they are numerous. (Sorry!) And you don’t need to stop at ten…just keep counting (The Thirty-Nine Steps anyone?) Hey, I can’t be the only one out there with too much time on his hands.