If you’re a fan of the Classic or Golden Age of Detection (Dorothy L. Sayers, Agatha Christie) and filmed dramas set in the early days of the twentieth century (Downton Abbey, Upstairs Downstairs), then you understand the lure of the manor house and the magic of the escape into a world that never quite existed.

Novels and films set from about 1900 up until the beginning of WWII which feature characters of the rich elite and their devoted (or devious) servants attract many followers. The storylines tie into our fantasies, in one scene allowing us a vicarious experience of luxury and privilege as the owner of an estate, and in the next, we are the lowly scullery with dreams of marrying the master’s son (or murdering the master’s wife). In these settings we also find humor, excitement, and a cautious suspicion of new—or new to the characters—technologies that today we either take for granted or deplore. Automobiles and telephones were elegant novelties both distrusted and coveted. One of my favorite Downton Abbey scenes has Violet, Dowager Countess of Grantham, nearly toppled by a swivel chair. She is told they were invented long ago by Thomas Jefferson, and she remarks, “Why does every day involve a fight with an American?”

There is enough truth in these entertaining works to ground us, to make them believable or to at least suspend disbelief, and often to educate us in some way, giving us glimpses into ways of life and doing business that are now obsolete.

What is missing is the tedium of everyday real life, the ugliness of poverty, the meanness of prejudice. Those things are represented, but never in a way that makes one cringe, always with optimism that good will win out and a happy, or at least gratifying ending will soon follow. Occasionally, a tragedy does strike for which there is no remedy, but I suspect it’s the underlying hopefulness of manor house stories that has the greatest appeal. After all, if Hercule Poirot didn’t always solve the case (even if too late to prevent a murder) or if we didn’t believe Lady Edith of Downton Abbey would eventually find love, would we reread the stories or be so eager for a next season? 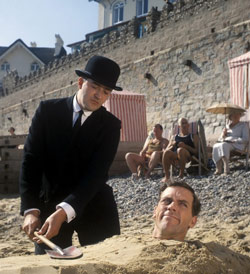 I don’t even need a manor house to enjoy the escape. Any story with a maid or valet has the potential to lure me in. As a modern woman sick to death of doing dishes, I sigh with longing as the lady of the modest home returns from a day in town, sinks into a chair by the fireplace, and is served a nice cuppa by her maid, who tells her dinner will be served in a half hour. I envy that fool Bertie Wooster who doesn’t deserve his brilliant man Jeeves in P.G. Wodehouse’s comic novels. From cottage to flat to country estate, Jeeves is there to save the day, starch the shirts, and keep his master in line. I could use a Jeeves around my house, organizing my drawers, and saying to me as I head out the door, “Did you intend to amuse with your choice of attire, Madam?”

I find most immersive those works created in the time in which they are set. While they withhold the harshest realities of life, they provide the authentic attitudes of the period. If any characters take a position of being politically correct or bold, they are stances representative of their time, not mine. For instance, Dorothy L. Sayers’ in Gaudy Night explores the complexities of choice for women. Love, marriage, career, it seemed impossible for a woman to have them all and sacrifices must be made, while men faced no such crisis. The topic is timely even now, but reading about them through Harriet Vane gives the reader a 1930s perspective. Downton Abbey, on the other hand, represents contemporary writing about the past that assigns today’s politically correct attitudes to the most unlikely characters. While I enjoy the episodes thoroughly, I also can’t help rolling my eyes at times. Is it likely a gay man like the valet character Thomas Barrow would win the friendship of James, the homophobic footman he’d been pursuing? Or that Lord Grantham would lie to the police to protect Thomas, motivated mostly by Thomas’s ability on the cricket field? But even as I roll my eyes, I’m happy the storylines turn hopeful not ugly. There’s no harm in enjoying the implausible, and in spending a few hours immersed in a world where the best of humanity triumphs. At the very least, after reading a manor house mystery or indulging in a television period drama, I’m refreshed enough to face the sink full of dishes.

To enter for a chance to win a signed set of Professor Bradshaw mysteries by Bernadette Pajer, inventive whodunits set during the early 20th century of Edison and Tesla, make sure you’re logged in as a registered member of the site, and then simply leave a comment below.

NO PURCHASE NECESSARY TO ENTER OR WIN. A purchase does not improve your chances of winning. Sweepstakes open to legal residents of fifty (50) United States and the District of Columbia, who are 18 or older. To enter, fill out entry at https://www.criminalelement.com/blogs/2013/06/manor-house-murder-mysteries-maids-valets-christie-poirot-downton-abbey-historical-bernadette-pajer beginning at 10:30 p.m. Eastern Time (ET) June 20, 2013. Sweepstakes ends at 10:29 p.m. ET on June 27, 2013 (the “Promotion Period”). Void outside of the 50 US and DC and where prohibited by law. Please see full details and official rules at https://www.criminalelement.com/page/official-rules-professor-bradshaw-comments-sweepstakes. Sponsor: Macmillan, 175 Fifth Ave., New York, NY 10010

Bernadette Pajer is the author of The Professor Bradshaw Mysteries in which she strives to provide a Classic Age of Detection atmosphere while reflecting the attitudes of early twentieth Americans in the rapidly changing era of Tesla and Edison.