Making Our Ghost Reappear: Why We Revived Our Haunted Bookshop Mysteries after Nearly 10 Years

Read Cleo Coyle's guest post about returning to their Haunted Bookshelf Mystery series, then make sure you're signed in and comment below for a chance to win a copy of The Ghost and the Bogus Bestseller! 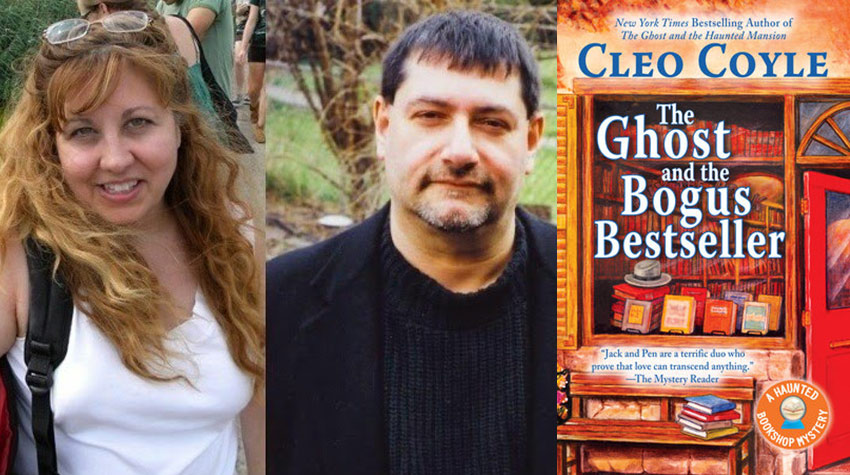 Fictional characters haunt us. Like trusted friends, some speak to us so powerfully that we continue to hear them beyond their stories. That simple idea—the capacity of a character to come alive off the page—lies at the heart of our Haunted Bookshop Mysteries, an amateur sleuth series that my husband and I created in 2003.

Like our protagonist—a young, widowed bookseller named Penelope Thornton-McClure—Marc and I grew up loving books. Penelope’s father, a small-town cop, was a fan of detective fiction, which is how she developed her affection for the noir adventures of Philip Marlowe, Sam Spade, and the hardboiled antiheroes of the Black Mask school.

One day, under the stress of dealing with a difficult author, Pen hears a gruff and angry voice in her head. Being a polite “do right” Jane sort of person, she can’t imagine where this outspoken voice came from. She would never use such blunt and colorful language.

Was this assertive, masculine voice really haunting Pen? Or was her alter ego expressing itself through an iconic character like the ones she discovered in her father’s library?

The “ghost” in question is Jack Shepard, a private investigator who was famously gunned down in 1949 in the very building where Pen now runs her bookshop.

Whether Jack is an actual apparition or the vivid imaginings of a stressed and lonely widow, he becomes Pen’s invisible companion. When big-city crimes occur in her small Rhode Island town, Pen seeks the counsel of the surly, wisecracking gumshoe in bringing the cunning culprits to justice.

This unlikely duo of a prim, repressed bookseller and hardboiled ghost delighted readers as much as the inspiration for our series originally delighted me.

Years ago, I read the story of The Ghost and Mrs. Muir by R.A. Dick, the pen name for author Josephine Leslie. The book was a bestseller in 1945. Two years later, Hollywood turned it into a classic film, which inspired a 1968 television series.

What influenced me most, however, was a realization about the era in which the novel was produced. World War II had just ended, and many women were grieving the loss of their vital husbands. Ms. Leslie’s novel gave these women the story of Mrs. Muir, a young widow like themselves, who is befriended by the spirit of a vigorous sea captain, one who “dictates” a bestselling book to her.

I appreciated the comfort that novel must have brought to war widows of the time. The Ghost and Mrs. Muir made vivid the idea that spirits are looking after us. Whether the spirits are real or residing within ourselves—as imagination, passion, or creative potential—the notion is an uplifting one.

Of course, The Ghost and Mrs. Muir is not a mystery, and though Ms. Leslie’s novel provided a baseline inspiration for our series, Marc and I worked hard to create a fully realized world of original characters, settings, and stories, as well as a functioning structure that could support multiple works of crime fiction.

As longtime fans of film noir and the Black Mask writers, my husband and I also took pleasure in developing flashback subplots for our ghost character, Jack Shepard—along with a fictional device that allowed our prim bookseller to join him in a kind of unconventional PI school.

Pairing Jack’s hardboiled darkness with the lighter character of Penelope proved an entertaining match for many readers, and our stories became national bestsellers.

Then, we stopped writing them.

There were many reasons why—one being the demands of our Coffeehouse Mysteries, a long-running series that is still going strong with 17 titles, with the 18th on the way.

Another reason was the climate. In 2009, the rise of ebooks and self-publishing rocked the book trade. Predictions about the “death of print,” the demise of booksellers, and the end of traditional publishing were all the rage. At the same time, speed of output made the market feel crowded and chaotic, so we made the difficult decision to let our ghost rest in peace—for a while, anyway.

Until the atmosphere surrounding the book business (a trade, don’t forget, that we were writing about via Pen’s profession) became a little saner, we decided to focus on a single series and put our Haunted Bookshop Mysteries on hiatus.

What we never expected was the outcry that ensued.

Emails, messages, and comments on posts from fans implored us to revive the series. We expected this to die down over time, but it never did.

Our readers’ steadfast devotion was the primary reason we made our ghost reappear. To their credit, our longtime publisher and new editor, Michelle Vega, had the faith to bring Jack back, and so we have with our first new Haunted Bookshop Mystery in nearly a decade: The Ghost and the Bogus Bestseller.

The truth is our characters never stopped haunting us. Like our readers, to whom we dedicated our new book, we consider Jack and Pen to be good friends. And nobody wants to lose a friend, not even a fictional one.

Comment below for a chance to win a copy of The Ghost and the Bogus Bestseller by Cleo Coyle!

The Ghost and the Bogus Bestseller Comment Sweepstakes: NO PURCHASE NECESSARY TO ENTER OR WIN.  A purchase does not improve your chances of winning.  Sweepstakes open to legal residents of 50 United States, D.C., and Canada (excluding Quebec), who are 18 years or older as of the date of entry.  To enter, complete the “Post a Comment” entry at https://www.criminalelement.com/making-out-ghost-reappear-comment-sweepstakes beginning at 2:00 p.m. Eastern Time (ET) October 2, 2018. Sweepstakes ends at 1:59 p.m. ET October 9, 2018. Void outside the United States and Canada and where prohibited by law. Please see full details and official rules here. Sponsor: Macmillan, 175 Fifth Ave., New York, NY 10010.

Cleo Coyle is a pseudonym for Alice Alfonsi, writing in collaboration with her husband, Marc Cerasini. Both are New York Times-bestselling authors of the Coffeehouse Mysteries, now celebrating 15 years in print and three starred reviews. Alice has worked as a journalist in Washington, D.C., and New York, and has written popular fiction for adults and children. A former magazine editor, Marc has authored espionage thrillers and nonfiction for adults and children. Alice and Marc are also bestselling media tie-in writers who have penned properties for Lucasfilm, NBC, Fox, Disney, Imagine, and MGM. They live and work in New York City, where they write independently and together, including the Haunted Bookshop Mysteries. To learn more, visit Cleo’s online coffeehouse at CoffeehouseMystery.com and follow Cleo on Facebook and Twitter.