December 10, 2019
Location is everything! Join Elizabeth Penney, author of Hems & Homicide, the first book in the Apron Shop mystery series set in the quaint village of Blueberry Cove, Maine, for a look at why Maine—with its gorgeous vistas and isolated locations—has continued to intrigue crime writers for generations.

Eudora Welty once said, “Fiction depends for its life on place,” and perhaps nowhere is that truer than fiction set in Maine. What is it about this sprawling, forested, mostly empty state with its craggy coastline and innumerable lakes and ponds? Mention Maine and associations seem to go off like flashbulbs. Whether that’s due to Stephen King, Murder She Wrote, or L.L. Bean, I’m not quite sure. No matter. Maine has a strong and cherished identity in our nation’s collective imagination.

This so-called Maine mystique has been enthralling crime writers and readers for over a hundred years. The Mystery of Bar Harbor by Alsop Leffingwell was published in 1887, when the town was a Gilded Age destination second only to Newport, Rhode Island. In 1917, the American Library Journal listed The Racoon Lake Mystery by Nevil Monroe Hopkins as a leading title, “perfect for the lover of thrills in detective fiction.” And, Edgar winner Elizabeth Daly, purportedly Agatha Christie’s favorite American author, set the first two of her famed Henry Gamadge mysteries on the Maine coast.

But there is another side to Maine. Beyond the postcard beauty, the grandeur of water and sky, lie the realities of a mostly impoverished rural state.

These early authors took advantage of reader interest in a state heavily promoted as a desirable and popular place to visit. Many writers today do the same, wielding the state’s notable features as a form of creative shorthand. A mention of the Maine coast automatically evokes salty air and chugging lobster boats and vistas of lighthouses and islands. Atmosphere, and lots of it.

But there is another side to Maine. Beyond the postcard beauty, the grandeur of water and sky, lie the realities of a mostly impoverished rural state. Except for the golden strip along the mid-to-southern coast, Maine residents struggle with the decline of the forest industry, decaying cities, and a sluggish economy. The opioid crisis has hit Maine hard as well, with a rate of deadly overdoses per 100,000 that is double the national average.

Michael Koryta’s recent novel, How It Happened, weaves the effects of the opioid crisis into an investigation of two murders. Set in a fictional small town, his portrayal of life on the Maine coast is gritty yet permeated with a grim beauty. “Beauty and danger are always joined in Maine,” Koryta says. Also driving his novel is the uneasy relationship between native-born residents, such as his FBI investigator, and those “from away.” “I’m fascinated by communities that require seasonal population increases for survival,” Koryta says, “and all of the complex dynamics that creates.”

Maine’s community dynamics provide perennial inspiration for writers, even those who write lighter-hearted stories. Kathy Lynn Emerson, author of the Liss MacCrimmon series, is inspired by her husband’s family history to set books in inland Maine. Her upcoming A View to a Kilt features that iconic event, the town meeting, held once a year for citizens to debate ordinances and budgets. And then there are the people, often caricatured in popular humor. “Local eccentrics aren’t hard to come by,” Emerson, who lives in Western Maine, says. “Although I’ve tried not to base any of my characters on real people.”

Sarah Graves’s long-running Home Repair is Homicide cozy mystery series is set in Eastport, the easternmost city in the United States. The series features a woman from away who starts a new life in Eastport—like the author, who moved to Maine from Manhattan. A desire for a fresh start and simpler life motivates many “transplants,” to the state, perhaps reversing an otherwise declining population.

After sixteen books, Home Repair’s main character, Jacobia Tiptree, runs a bakery in a new cozy series, with Death by Chocolate Frosted Doughnut releasing soon. While the home repair and Death by Chocolate mysteries are on the light side, Graves has also written darker stories that tap into the raw brutality of life in the state’s isolated north. In Winter at the Door, Lizzie Snow, a former Boston homicide cop, tracks down a killer while searching for her missing niece. “This lovely place is ready to freeze you or drown you, too,” Graves says. “Maine never lets me run out of wonderful settings for murder!” 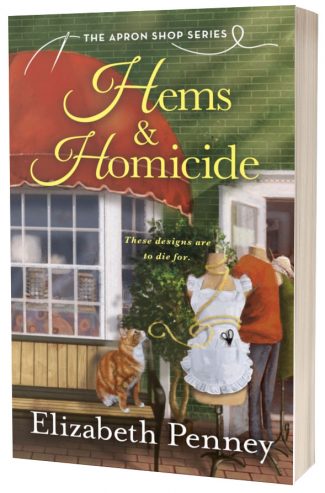 About Hems & Homicide by Elizabeth Penney:

Iris Buckley is sew ready for a change. After the death of her beloved grandfather, Iris decides to stay in her Maine hometown to help out her widowed grandmother, Anne—and bring her online hand-made apron designs to real-time retail life. Her and Anne’s shop, Ruffles & Bows, is set to include all the latest and vintage linen fashions, a studio for sewing groups and classes, and a friendly orange cat. The only thing that they were not planning to have on the property? A skeleton in the basement.

Anne recognizes the remains of an old friend, and when a second body shows up in the apron shop—this time their corrupt landlord, whom Anne had been feuding with for decades—she becomes a prime suspect. Now, it’s up to Iris to help clear her name. Enlisting the help of her old high-school crush Ian Stewart who, like certain fabrics, has only gotten better-looking with age and her plucky BFF Madison Morris, Iris must piece together an investigation to find out who the real killer is. . .and find a way to keep her brand-new business from being scrapped in the process.

Elizabeth Penney is the author of more than two dozen cozy mysteries, among other novels. She is a member of the Women’s Fiction Writers Association and the owner of 2 Penney Productions. A former consultant and nonprofit executive, Elizabeth grew up in Maine and now lives in the White Mountains of New Hampshire, where she also operates a small farm. Hems & Homicide is the first in the Apron Shop series. Visit her website to learn more.