I live in a relatively quiet neighborhood. We’re talking a lights-out-at-nine kind of place. The houses are sleepy, the lawns decently kempt, everyone’s sprinklers go off at exactly the same time each evening, neighbors wave to one another and smile while standing in the driveway and washing their cars. Everything is kept neat and tidy beneath a cozy comforter of normalcy, but normalcy is the perfect breeding ground for monsters. 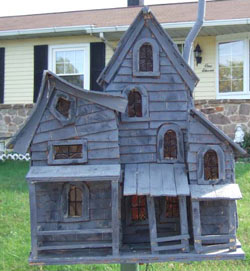 I have an overactive imagination. I see the weird and creepy where people see, well, not much of anything. So, as my husband and I drove up and down a street we couldn’t avoid if we ever wanted to leave our house or come back home, I started to notice one particular house. It was plain with a curved concrete walkway leading up to a front door, a few scraggly rose bushes flanking the entryway. A sickly-looking sapling swayed in the breeze, its plastic nursery tag still attached to the lowest branch like some escaped hospital patient. It was, for all intents and purposes, a normal, understated domicile that blended into the background. Except for the mailbox. And that mailbox drove me crazy. Up and down that road we’d go, my eyes fixed on that house like a stalker studying her prey. “Do you see that?” I’d ask my husband almost every time we’d drive by. That damn mailbox was holding on by a thread, white with a decorative wrought-iron leg holding it aloft in the air by a single screw, its door flopped open in an almost brazen way. That mailbox was mocking me, because it was impossible for the owners to not have noticed what was going on. It frustrated me that the mailman continued to deliver their mail at all. Wasn’t this breaking some sort of universal mail carrier code? Every time we’d pass, I’d think up different ways to make it worse, to force those lazy homeowners to fix the very thing that was grating on my nerves. I considered writing anonymous notes and stuffing them into my pockets before taking random late night walks. I thought about posting an ad on Craigslist in search of a juvenile delinquent who was also the proud owner of a baseball bat. When I was the one driving, I thought about jerking the wheel, hopping the curb, running that mailbox over before flooring it down the street, my head hanging out the window while I laughed maniacally toward the sky. Eventually my joking tone shifted to sincerity, because this was ridiculous. It had been weeks. That mailbox haunted my dreams. I couldn’t wash my hair with my eyes closed, afraid that when I’d open them it would be standing there, lolled to one side, staring at me with its gaping hangdog door. The world would go black and white. There’d definitely be a dolly zoom effect. I’d scream like Janet Leigh in the shower scene from Psycho, except this would be Mailbox; and instead of stabbing me to death, it would spit stamped envelopes and junk magazines and those coupon packs we always consider opening but apathetically end up tossing in the trash. I told my husband, “I’m going to stick a note on their door.” And as soon as I said it, he gave me a look like that was the worst idea he’d ever heard. “Don’t do it,” he said. “You never know who lives there.” His simple warning was enough to jumpstart a whole new train of weird and twisted thought. Because do we really know who our neighbors are? Sure, they may wave hello and wash their cars and laugh and smile and mow their lawns, but any psychopath would do the same. We may have been inside some of those houses, sucking sticky BBQ sauce from our fingers while carrying around a paper plate, complimenting them on their decorating and admiring their meticulous backyard, but being neighborly is a great cover. Disguises are what serial killers wear. They were such nice, quiet people. We never once suspected. That’s why you’ve got to watch out for those details—the broken mailbox that any sane, rational person would have fixed on the first day. Because boring neighborhoods are the best places to hide, and the most dangerous monsters hide in plain sight.

Image of gun mailbox from Work-Killer, Danger mailbox from roadtrip.burningman.com, and the rest from UglyMailbox.com

Born in Ciechanow, Poland, Ania Ahlborn has always been drawn to the darker, mysterious, and sometimes morbid side of life. As a child, she’d spend hours among the headstones of the large wooded cemetery next door, breaking up bouquets of silk flowers so that everyone had their equal share. Her debut novel, Seed, is a tale of spine-tingling Southern gothic suspense about a man with a demon on his back.