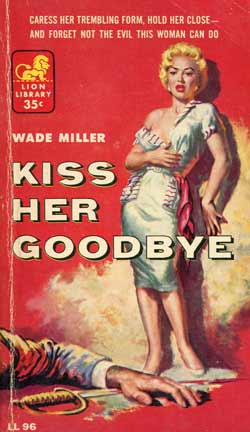 Sometimes a good setting is all an ace novelist needs to pen a memorable story. Give an able scribe a backdrop that is the stuff of fertile literary ground and they can go to work in spinning a yarn that will please their faithful. One such setting, particularly around the middle of the 20th century and particularly for writers of what we now call noir fiction, was a motor court, or auto court. You know, those old roadside motels that were generally found right off highways and that were meant to lure tired travelers in need of a quick, cheap, frills-free stay before they started the next leg of their trek. As I wrote about in an earlier installment of this column, Clifton Adams employed a motor court as primary setting to great effect in his top rate noir novel Death’s Sweet Song. Similarly, Wade Miller very effectively used the same kind of physical grounds as the place around which to base the superb 1956 book Kiss Her Goodbye.

While Adams’s novel has the troubled owner of a motor court as its lead character, the Miller book follows the doings of a pair of guests at one of the inns. Ed Darnell and his little sister Emily wind up at the Quality Auto Court in Jimmock, Calfornia by chance. And while they initially had no plans to remain in their room at the place for more than a night or two, they become long-term visitors.

Before we delve any further into the particulars of the Darnells’ saga, here’s a description of Jimmock per the novel’s omniscient narrator:

Jimmock wasn’t a new town. The ancient cottonwoods, planted at regular intervals down the side streets, gave proof of that. But it was not withering away as did so many of the desert settlements. Perhaps that was because it was not wedded to any single industry. Mines petered out and oil wells ran dry but Jimmock hadn’t played the game of boom or bust. Jimmock had grown slowly, apparently, but it was still growing. Many of the store buildings were frame, old-fashioned false fronts, but an equal number had been built since the war. The Bank of America building was brand new, a sign of prosperity. Ed saw a modern supermarket and three department stores and a new style union high school building, in addition to the expected collection of gas stations, cafes, bars and Indian curio shops.

The state highway was Jimmock’s business artery and main street but cross streets were paved also. He didn’t explore any of them but what homes he could see appeared substantial. So did the people he passed, although the business district was quiet. Dance music wafted from the community center building in the small plaza in the middle of the town , and the couples on the veranda looked to him like Young America on a magazine cover.

Now, about Ed and Emily. Ed is in his late 20s and is a sturdy, responsible, rugged kind of guy who does odd jobs, mostly driving trucks for this or that outfit. His sister Emily is an 18-year old hottie who has a movie star face and a sex kitten physique. And here’s the problem about Emily, and the source of the story’s conflict: while she has the body of a fully grown young woman, she has the mind of a pre-adolescent. Due to some vague condition that Ed refers to as a “brain fever,” Emily stopped maturing emotionally and cognitively years before, even while her womanhood has been progressively blossoming. And it gets worse, because Emily carries on like a 12-year who is at once especially gullible yet prone to violent outbursts when upset. Do you see where all this is going? Guys like Emily. They come on to her, like to try and touch her if they can get close enough. Emily initially appreciates the attention, craves it actually; but when the fellas start trying to do stuff that she neither understands nor wants, she tends to strike out at them. She’ll use her fingernails to defend herself if she has to, but if an object like a rake, a heavy flashlight, or, say, a sword is handy, she doesn’t hesitate to utilize those implements in her defensive attack on her amorous pursuers.

Here’s Ed explaining his sibling’s condition as he understands it:

“She’s not a freak physically, like an idiot or an imbecile can be. She’s the highest grade of mental deficient there is. But her mind is still that of a 12-year old kid. She can only think so far and after that her judgment’s no good. You see, she’s not equipped to face grown-up problems. The world’s too complicated for her. But you can’t tell that about her right off. She can talk to people and they never guess. There are some like her who even get so they can work at a trade, with the right help. As long as she can through the simple motions of everyday life, the things she’s learned about, why, she can pass as a normal person, but a sort of sweet dumb blonde. She can read and write and feed herself and dress herself and all those things she’s learned by heart. I got her clear through the ninth grade before I had to take her out of school.

“But, actually, more helpless than if she was just really 12 years old, because people expect more of her. If I wasn’t around to watch over her…”

So where does this leave Ed? In a bind, naturally. The siblings lost their parents sometime back so Ed is all the family Emily has. He takes the responsibility of being her caretaker; and to say that burden comes with some baggage is to issue a ludicrously understated prognosis. Ed tries to keep guys away from Emily and when he can’t, and when the inevitable happens and the dudes wind up as victims of Emily’s assaults, he has to clean up the mess. His cleaning jobs generally involve just fleeing from the town where the incident occurred. And this is how the two wind up in Jimmock. Emily put a vicious beatdown on some joker who tried to get in her stuff at the last place they were living, and before anything like complaints to the police could occur, Ed grabbed his sister and their few permanent belongings, got them in the car, and drove away in escape.  They’re chugging along in desert country, not far from the California/Arizona border, Ed having the vague thought of trying their luck in the town of Barstow. But first they pull into Jimmock for a fuel stop and when Emily sees the auto court she asks if they can rest up there.

So they take a room at the Quality Auto Court. And then a couple different things happen that make the siblings decide to stick around the place for a while. First, Emily just likes the town and asks her big brother if they can hang there for a stretch. Second, the kindly owner of the roadside inn takes an empathetic liking to the Darnells, and to Ed’s great relief not just because he has the hots for Emily; he offers them an attractive rate on a month-long stay. Next, Ed finds what looks to be a good job in the town, driving a truck for a company that supplies markets with various food items for sale. And the real clincher for Ed is when he gets acquainted with a nice looking and way likeable widow who does office work at his new place of employment.

This passage follows Ed’s thoughts as he and Emily are in the process of getting settled in Jimmock:

He bought a movie magazine for Emily before he left the drugstore. He walked at a leisurely pace back to the auto court. Tubbs was still sitting on the porch, drinking another can of beer. Nothing had changed. He gave a friendly wave to Ed and Ed waved back.

Ed unlocked the door to Cabin 5. Emily was sleeping soundly. The light didn’t awaken her. She had kicked off the sheet and her pajama-clad body was curled on its side, like a kitten. Ed covered her and she didn’t stir. He stood over her for a long time, looking down at her.

Maybe things would work out for them this time. Maybe.

Of course, if all went swimmingly with no disturbances for the siblings in Jimmock, there wouldn’t be much of a story to tell here. A couple different things/people threaten their long-term harmonious existence in the town, the biggest problem being Ed’s new boss.  The guy starts out as decent-enough fella to work for – seemingly honest, friendly, and fair in his dealings with his staff. But if he’s a straight-up guy as an employer, he’s on the shady side in his personal life. He’s married and it seems his wedded life is something of an open situation. His wife travels a lot, apparently to her lovers in other towns, and, you know, while the cat’s away (especially when she’s away doing that) . . . You’ve probably already guessed that Ed’s new boss takes a shine to Emily. And the guy, who came off as such a good sort at first, appears more like a devil as he dismisses Ed’s polite requests that he leave the girl alone, and gets more and more insistent in his horny pursuit of Emily. This can’t be a good thing for any of them, can it? Read the book to find out how bad it gets.

Wade Miller is a joint pseudonym used by the writing team of longtime friends Bob Wade and Bill Miller. Other standout works of theirs include this Max Thursday P.I. series, the novel Kitten With a Whip which was made into the excellent movie of the same title starring Ann-Margret in the lead role, and Badge of Evil (they used the pseudonym Whit Masterson for that one) which was adapted by Orson Welles for the classic film noir Touch of Evil.