Looking Back at The Haunted Bookshop by Christopher Morley (1919)

Pull back the mask and learn more about this 100-year-old bookselling mystery! 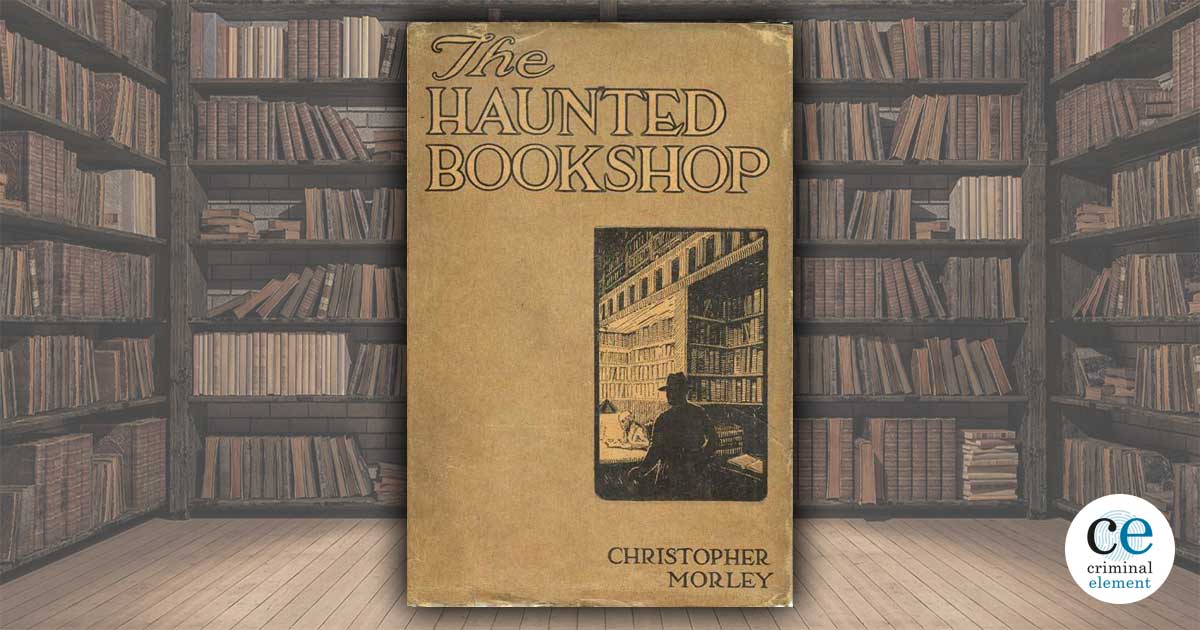 Celebrating its 100th birthday this year, The Haunted Bookshop—a fun little novella by prolific bibliophile Christopher Morley—remains in print to this day, and continues to make its welcome presence felt in the world of literature. Although the title implies ghosts, there are no supernatural elements to be found, though it does contain crime novel tropes aplenty. What starts off as a kind of collection of monologues and dialogues in praise of the bookselling profession—all very quick-witted and readable—soon turns into a mystery involving sinister saboteurs and a plot to kill President Woodrow Wilson.

The book opens when a young advertising copywriter named Aubrey Gilbert steps into a Brooklyn bookstore called Parnassus at Home. The owner is a bald chain-smoking chatterbox named Roger Mifflin: Morley had previously written of Mifflin’s days as a traveling bookseller in the 1917 novel Parnassus on Wheels. Mifflin is long-winded, but he’s also very entertaining, and he and Aubrey have a lively discussion of the nature of bookselling, the effects of books on the mind, and the future reading in a world where books are forced to compete with entertainments such as those newfangled (silent) motion pictures.

Although Aubrey is in some sense the novella’s protagonist, he admits that he’s not much of a reader, and much of the story involves Roger pontificating on books, both their commerce and their social importance. At one point, Roger has several other booksellers over and the discussion turns to what is ‘quality’ and what is ‘tripe.’ Later, Roger has to furnish the room of a young woman coming to stay with him and his wife, and he soliloquies over what books you should present to a guest to supply their literary needs.

There’s a memorable moment when Roger, his wife, and their guest sit down after dinner and Roger excitedly starts reading aloud some short stories from Dickens as a way to entertain. And why not—what else were they going to do, really? This is years before television, and even radio shows didn’t exist until 1920. Reading must have been a much more central activity back when homes had much less in the way of entertainment paraphernalia, but it’s also encouraging to note that, a century later, in an age when every room in our apartments and homes come equipped with several different electronic storytelling options, we still have bookstores and booksellers, and not even streaming video has brought reading to an end, even if we no longer read Dickens aloud to each other (though many contemporary parents do just that with Rowling’s books).

Meanwhile, Roger keeps quoting from Thomas Carlyle’s book on Oliver Cromwell, yet when he goes to get the store’s copy, it’s gone. It eventually reappears in the store, after some anonymous person puts a notice in the personals section of the newspaper asking if anyone’s found a lost copy. Aubrey later discovers a marked up cover torn off of Carlyle’s book in a drugstore. Clearly, something is afoot.

And indeed, criminal doings swirl around Roger’s copy of the book. Aubrey is attacked at one point and later sees someone entering Parnassus at Home after hours. Convinced that Roger is in league with the people who attacked him, Aubrey confronts the bookseller only to get straightened out (and knocked out—Roger may be a bookworm, but don’t push him!) and the two team up to prevent the real criminals from hatching a plot whose objective they can only guess at.

It bears pointing out here that the Parnassus at Home gang, as they seek to unmask a criminal plot that seems deceptively supernatural, bears a striking resemblance to another sleuthing quintet. Aubrey, a physically fit if bland young fellow, resembles Fred; the young apprentice Titania, an attractive ingenue with a high tolerance level for boys’ shenanigans, is like Daphne; Roger is an oddball who more than a few times goes on at length about food (a la Shaggy); and Roger’s wife Helen is a no-nonsense woman who bears a few of Velma’s traits. To top it all off, there’s a dog, the Mifflins’ bookstore pooch Bock, short for Bocaccio, who plays a fairly big role in solving the mystery. So the theory that the Scooby-Doo characters were based on five New England colleges might not actually be accurate.*

And like those cartoon characters, part of the fun of Morley’s creations is how he varies their voices with slang phrases that were painfully dated even by the start of World War II. Titania’s father is described as a “duck” and a “corker,” Roger designates most shows as “tosh,” and at one point, an exasperated Aubrey describes their situation with the outburst “Triple-distilled lunacy!” giving “Jinkies!” and “Zoinks!” a serious run for their money.

But there’s a lasting influence that Morley’s book had on our world that’s much easier to trace, because… I didn’t just make it up. In 2011, when author Ann Patchett and publishing salesperson Karen Hayes sought to rectify Nashville’s absence of bookstores by opening one of their own, they named it Parnassus Books, in an acknowledged nod to Morley. And they took it even one step further: When Patchett and Hayes expanded the business to include a luxurious bookmobile, they painted “Parnassus on Wheels” along the side of that grand vehicle.

Morley went on to write a ton of other books, edit Ladies’ Home Journal, co-found the Book-of-Month Club, and solidify his reputation among mystery lovers by creating the Baker Street Irregulars in 1934. A park in Long Island bears his name and houses the relocated shack where he did his writing. He’s had more than one literary afterlife, but The Haunted Bookshop may be his most durable work of fiction. It’s an interesting document of the challenges faced by booksellers a century ago—challenges which haven’t really changed much—and it’s a diverting excursion in crime fiction territory with characters whose love of reading is almost a celebration.

*In fact, Hanna-Barbera based the characters in Scooby-Doo on similar characters from the comedy sitcom The Many Loves of Dobie Gillis.