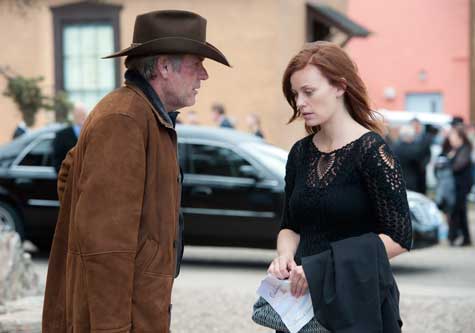 Time has run out for Henry (Lou Diamond Phillips). With Gab (Julia Jones) temporarily safe with the Medicine Woman (Tantoo Cardinal), the Crow elder sends Henry packing straightaway to clean up. His truck is literally a bloody mess and the station wagon that Gab borrowed from her friend Mandy (Tamara Duarte) needs to be returned. After finding that his truck has been stolen, a frantic Henry calls Longmire (Robert Taylor) and learns the sheriff is searching for Gab in the deaths of the two rapists. When Henry drops off Mandy’s car and tries to quickly walk away—though he’s moving none too quickly given the still-fresh bullet wound—he’s stopped and then assaulted by Walker Browning (Callum Keith Rennie) who’s also looking for Gab to get justice for his workers. Hmm, not so sweet when the shoe is on the other foot, is it, Mr. Browning?

Longmire and Vic (Katee Sackhoff) are called to the scene and when Henry is questioned, he has as tight an alibi as he can muster, except there’s a slight hanging chad. He spills that Cady (Cassidy Freeman) saw him with Gab at a specific time. Unfortunately, Longmire’s already been told by Cady that Gab was alone, and now he knows for sure that his daughter has lied to him. Whew! Nicely convoluted, right? Stunned and dismayed that his daughter is not telling him the truth, he confronts her. Cady hides behind the legal technicality that her client relationship with Henry was never officially dissolved and she has a responsibility to protect him. Most tender scene goes to Longmire telling her, “I understand the rest of the world disappointing me. But you?” 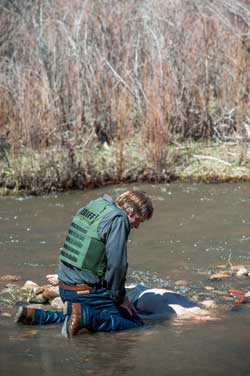 Monte (Stephen Louis Grush) is pressing charges against Zachary (Barry Sloane) for assaulting him and illegally seizing evidence of Monte’s investigation into the Sheriff’s department. Monte had been up for the deputy position that Zachary landed. Both come across as wingnut crazy, though Monte does finally reveal his ulterior motives when confronted by Longmire. I seriously question whether Longmire will ever again think about using Of Mice and Men as a recruitment device. Longmire asks for Zack’s badge and gun, feeling the need to squash the possibility of any future problems. Deep down Longmire knows Zachary is a good man, especially after The Ferg (Adam Bartley) expresses disappointment over his colleague being let go. And I don’t understand either. Of all the times Longmire has bent the rules, without even hearing what Zachary has found, Longmire dismisses the newbie after just two strikes. It won’t be long though before Longmire’ll realize that he needs to stay on the straight and narrow, or else.

I’ve been a bit tough on the way Vic’s character (Katee Sackhoff) has been written this season, but I have no such reservations with the confrontation between her and Longmire in this episode. She finally puts it square into the open, the romantic interest/sexual frustration that has been building for years, and she’s feeling more confused than ever. His tight-lipped conversation is annoying at this point and her demanding some kind of response was spot-on storytelling. As always, kudos to Mr. Taylor and Ms. Sackhoff. They’ve never been better.

Longmire’s showdown with Walker Browning was a nice homage to the very best of Western films like The Good, The Bad, and The Ugly. On the Crow reservation, the oil company foreman and two of his men have outnumbered the sheriff—who’s escorting a newly-found Gab (in more than one way, as the show implied in the most meaningful and philosophical way), off the Crow reservation to ‘face the music’ so that no other women will have to suffer the same torment. Forced to lay his weapons down, leaving himself and Gab vulnerable, Longmire is suddenly benefited by a guardian angel. Lead flies and bodies drop. The shooter surprised me, though in hindsight it was the logical development. Well-planned, sleight-of-hand writing there.

You know, for someone still haunted by the Crime Story (1986-1988) second season finale that was never continued when the show wasn’t picked up for another year, let’s pray to everything holy that Longmire on Netflix is a resounding success because, well, that ending delivered one helluva cliffhanger. I can now see why they wrapped up so many previous threads early on. We have Walt and Vic’s relationship hanging, Walt and the doctor’s fate hanging, is Zachary gone for good?, Cady’s new position and her uncomfortable expression of having accepted money from Jacob Nighthorse (A Martinez), and our resident hooded avenger Henry Standing Bear who lives up to the axiom that no good deed goes unpunished.

The closing words, Walt says in a voiceover, “Do you ever feel you’ve created more evil than you’ve stopped?” Poignant. Let’s hope this modern cowboy returns for season five to answer that question for us.