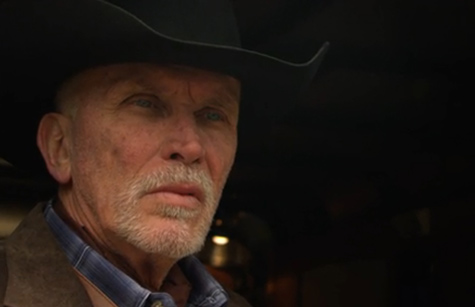 “If you do the job right, Walt, by the time you put down your sheriff’s badge, you’re a wanted man.” —Lucian Connally.

“Wanted Man” started strong and remained strong through the very end. A terrific episode written by Tony Tost and directed by Lucian himself (Peter Weller) followed the ongoing plotlines with some interesting twists and surprises. In a finely crafted opener that interweaves a flashback with current day narrative, Walt Longmire (Robert Taylor) is leaving his cabin, his late wife Martha calling after him to be careful. Even though you know he’s headed for a dangerous assignment, he looks relaxed; there’s an easy-going manner in his countenance. In a testament to Mr. Taylor’s skillful acting, this brief scene says it all: Martha was the balance that set his sail and when he had her, he had a reason to believe in life.

The flashback further reveals Longmire teaming up with Henry Standing Bear (Lou Diamond Phillips) to arrest the corrupt Malachi (Graham Greene) and ends in the present-day with Malachi seeking parole, as Longmire explains that Malachi extorted him several weeks prior and he’s not in favor. Are you also starting to think Malachi should be on Walt’s wall of possible suspects in Miller Beck’s murder? You may remember Beck killed Martha Longmire, and of course, Walt’s trying to clear Henry’s name as the chief suspect in Beck’s murder. To that end, Longmire takes a day off (not to burden the taxpayer) to track three likely candidates who could have eliminated Beck. When he realizes he could use some renegade back-up, he calls on Lucian Connally.

Weller may be best known for his roles in the Robocop franchise, the cult classic The Adventures of Buckaroo Banzai Across the 8th Dimension, and recent films like Star Trek into Darkness, but for the past twenty years, he has also directed some notable episodes of television, including stints on Homicide and Sons of Anarchy. Besides his crisp, no-nonsense direction in “Wanted Man,” he also, once again, doubles in front of the cameras as Lucian Connally—Longmire’s predecessor and Branch Connally’s (Bailey Chase) uncle. Lucian’s no-BS ways make him a darker version of Walt Longmire, or what Longmire would be like if we removed all of his better qualities of honesty and sense of morality. Still, Longmire finds himself asking the former sheriff for help in tracking down leads that could exonerate Henry. The rapport between these two law enforcers is particularly engaging and entertaining. In the scene where a suspect is fleeing in a pickup truck, Longmire and Lucian have their guns drawn and Lucian asks, “Windshield?” “Tires,” Longmire replies. Lucian then lowers his aim, “Softie.” A moment later, the suspect asks if they have a warrant to search a locked van for evidence. Lucian yells, “Fore!” as he shoots off the padlock from the back doors. Branch picks up where he left off in last week’s episode “In the Pines” by interrogating the Rez peyote dealer he kidnapped with the help of his friend, Travis. Using his own version of waterboarding, Branch gets no useful information after dumping peyote tea down the man’s throat, and then he releases the hallucinating man into a desolate stretch of land. Travis, who hasn’t been at all pleased with Branch’s behaviors, voices his opinion that the treatment of the dealer is harsh. And Travis eventually regrets helping his childhood friend, because Vic comes to question him after his description was given to the Rez Chief Mathias by the peyote dealer.

In the last several minutes, this superb episode doubled down with two—didn’t see it coming—surprises. First, Malachi is released on parole and stops by the Red Pony Cafe to rub it in to Henry that he’s now free, but Henry will undoubtedly be heading back to jail. Then, to add insult to injury, Malachi says Henry will have to sell the bar, implying he will buy it as he throws down a wad of cash on the bar to purchase the taxidermy specimens Henry is selling to raise money as a reward to find Hector. The second surprise comes when Longmire, Vic, and Branch finally find Hector—who is Henry’s best chance of getting cleared—but he’s been scalped and shot three times, and is dying in a cave. He's able to identify the picture of David Ridges that Branch is carrying as his attacker. In a heartfelt, moving scene, they move Hector outside the darkened cave to die in the openness of nature. His last, gripping words are, “This is between me and my ancestors now.”