Well, the episode title’s prophetic once more for Longmire. We are indeed back to the natural order of things in Durant, and sadly, it’s all a bit anticlimactic after last week’s stellar episode. Walt’s vision quest ends quite conveniently at the same moment as Cady snapping out of her coma, perfectly fine and dandy save for that new hospital gauze accessory wrapped around her head. Not that I wish the girl a horrible fate or anything, but…how about some lasting effects for the gang to continue to deal with? But no, she’s even well enough to play a practical joke, feigning amnesia with poor Branch, who comes visiting with heart on sleeve and stuffed animal in hand. (Awww.)

It’s stuffed animals of a different sort that make up the case of the week, as a park ranger’s body and a beheaded elk are found by Vic.

She and Walt follow the trail to a local taxidermist (played by Supernatural’s Jim Beaver) and the revelation that someone is scraping the velveteen off the elk’s antlers and selling it, because it can be used as a natural steroid. The mystery proceeds in the usual Longmire style, spending a lot of time on the red herring of a teen football player and his hunter father (played by Lochlyn Munro, who popped up as Walt’s waiting room buddy at the hospital last week). However, it’s not just a sports dad gone bad at fault here—as the mystery eventually points back to our taxidermist, whose wife is suffering from cancer and, in fact, knew Walt’s wife Martha. Because of that, I really wish we’d seen the sheriff arrest the killer this week. Because we’ve seen on several occasions in the past—even just last week—that Walt can sometimes let his secretly bleeding heart take precedence over the law. Especially when it comes to suspects who commit a crime to protect a loved one. I have to admit I did wonder if he’d even bother this week, with the poor cancer-ridden wife right there.

Overall, though, it’s pretty standard fare this week, with a minor moment of excitement when Henry, who’s helping Omar and Walt track in the woods, manages to get his leg caught in an Apache death trap. But even that is dismissed pretty quickly even though the trap (a hole filled with sharp wooden stakes) looked pretty brutal. Maybe he’ll have a cast or a cane next week? 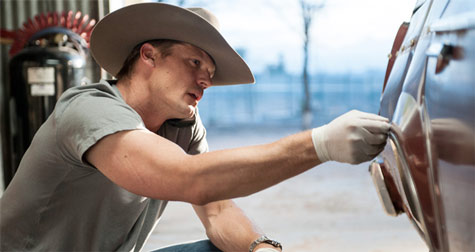 The more interesting thread this episode is definitely Branch following up on the puncture in the sidewall of Cady’s tire. As almost everyone expected, the trail leads him back to an employee of Jacob’s, and it seems clear that whatever partnership they had is over. Branch also goes to a pretty bristly Henry to ask if he thinks Walt will give him a second chance to be a deputy again. Henry tells the story of how he and Walt first met by getting in a fistfight and now they’ve been friends for 38 years, the moral being that he certainly will give second chances. I believe this story is straight out of the books, but…I have to admit that TV!Walt hasn’t seemed like a very forgiving guy thus far. Nevertheless, Walt does magically seem to be “trying to mellow” as he admits to Cady, and allows Branch back with nothing more than an “okay then.” And while I’m certainly glad Branch is back, and didn’t expect any other outcome really—this, too, is pretty anticlimactic. Sadly, there was no Ferg this week (It would have been really sweet AND good continuity to see his reaction to Cady’s rapid recovery), but that means we instead got an actual Ruby moment! Ruby knows her some Google fu! She successfully tracks down some key info about the velveteen and it’s nice to see her involved in the crime solving and not just answering phones and passing on messages.

Next week looks more promising as there are some dramatic shots in the promo of all of our regulars and the promise of a “cowboy going down”! Also, there’s Vic looking scarily serious and toting a gun. And Katee Sackhoff + firearms is always a great combination.