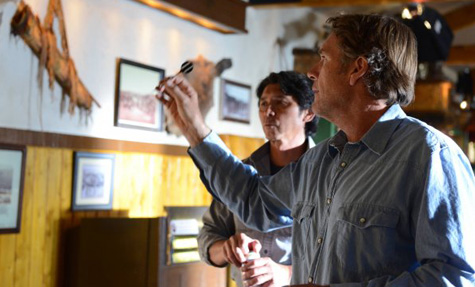 It’s a strong and swiftly paced first season finale for Longmire as the show finally takes a page—literally—out of the source novels. This episode features the same plot of Craig Johnson’s first Longmire mystery, The Cold Dish, as a quartet of teenage boys who were found not guilty of the gang rape of a developmentally challenged Native American girl suddenly start turning up dead.

Before we get to the real serious stuff however there’s a fun opening scene where we learn that Walt and Lizzie had a little slumber party the previous night. Apparently, though, the dizzy blonde helpfully informs us that it was “just like high school, without the sex.” With excellent timing, Vic and Ferg pull up to deliver Walt’s repaired truck, and there’s plenty of shock and awkwardness leaving Walt blustering that they better think twice about commenting. Luckily for him the phone rings in the nick of time, with Branch calling to tell him there’s a murder that needs solving: one of those boys was shot through the chest with an arrow, an Indian symbol drawn on his forehead.

Before Walt can start investigating, he gets another visitor. A detective from the Denver PD (played quite winningly by Charles S. Dutton) has a question for Walt: “Where are all the black people in this town?” Ha! But he goes on to say that really he’s got some news: they found the man who killed Walt’s wife. So the unsurprising reveal that it wasn’t just cancer that got Martha is now on the table.

Walt, in true Walt fashion, evades the detective’s entreaties to meet and talk (as he’s been doing, dodging the man’s calls for quite a while) yet again. And we won’t hear more about Denver till the last five minutes, so hold on to that horse for now.

We plunge back into the crime solving with an appearance from Omar! He’s filling them in on the kind of bow that could’ve been the murder weapon, and he and Vic have another delightful exchange when he says anyone could be the shooter, even Vicki. “That is the second and last time you ever call me that!” She shoots a bullseye and still has the weapon in her hand when he stupidly makes a crack about it being so easy a girl can shoot it. Wouldn’t be surprised if Omar is our first victim of season 2. Just saying.

Branch turns up evidence that the boys’ cars were spray painted with the same symbol as on the victim’s forehead and is convinced that the culprit is the girl’s brother, taking revenge on the boys. Walt refuses to arrest him and goes off to question the boys and their parents, but soon he’s in hot pursuit of Branch, who’s roaring off on his own to arrest the brother. Before he can tell Walt why (the boy worked at a hunting store where compound bows went missing), the men start scrapping right in the middle of the highway until Vic arrives and pulls them apart, screaming “I should arrest you both for public stupidity!” For a kicker, she informs them they’ve got another harpooned kid.

The mystery plays out pretty cleanly, with a couple unexpected twists and a harrowing showdown between Walt and the killer, who turns a gun on himself as Walt meaningfully intones that he used to believe the only way he could find peace was through death, but that there’s another way: Truth.

Walt saves the day, as he does, but the best thing about the mystery is that Vic gets to be far more of a badass this episode than she has all season, wading into the fray of a lot of out-of-control situations and getting people in order (she literally hauls Branch off Walt by the seat of his pants in that highway fight, and later she gets to break up a high school brawl by threatening the kids with detention or jail). However, when she tries to get all up in Walt and Lizzie’s business, the woman challenges her to admit she has some improper feelings for the Sheriff too. Lizzie suggests that Vic doesn’t wear her wedding ring for a reason (and it’s not the one Vic hilariously gives about it hurting people when she has to punch them in the face, complete with pantomime).

Always a scene-stealer, Katee Sackhoff’s face is priceless in all her conversations with Lizzie, a mixture of cloyingly fake good cheer thinly veiling her desire to strangle the woman. The end of the episode sees Vic slipping that ring back on and pensively contemplating. Does the deputy have romantic feelings for Walt or is she just being protective? The age difference between Sackhoff and Taylor is a tough one to hurdle, and personally, I’m not seeing any real romantic chemistry between the two. It would be a shame to potentially ruin the just-fine bond they do have as sheriff and trusted deputy, but the show sure does seem to be pushing that romance angle. In other matters of the heart, Branch and Walt do not reach any kind of a peace accord after their Cady-related blowup, the highway brawl as much about that as about the current case. As the episode wraps up, we see Branch looking at a paper trumpeting that Walt solved the case. Considering the less-than-warm welcome Walt got from both whites and Indians earlier in the episode, it’s a good thing for his election hopes. Not so good for Branch though, and a receptionist comes out and pleasantly says Jacob Nighthorse is ready to see him. Nooo! Don’t go to the dark side, Luke!

And finally we get back to Denver. Henry and Walt have a little chat about how avoiding calls and letters from the Denver PD makes Walt look suspicious, and Walt asks Henry if he should be worried. Henry insists he shouldn’t be, which seems to suggest Henry knows something Walt doesn’t about the whole thing? Or perhaps Henry did something to help his friend? Hmmm. He also brings up Cady and Branch, piqued that Walt didn’t bother to tell him about it before Cady did. And when his good buddy Walt basically tells him to MYOB, Henry snarks, “What a rich inner life you must lead. From time to time you should consider sharing some of it with the rest of us.” Truer words, Henry, truer words.

And his friend’s not the only one feeling that way. Cady is on Walt’s steps when he gets home, crying and furious that she had to find out from Failes that her mother hadn’t died of cancer but was murdered in Denver, when Walt knew all along. Cassidy Freeman really knocks the angst out of the park in this scene, as she has all season actually. She dismisses Walt’s claims that he was trying to protect her with a cold “You’re relieved of that burden,” twisting his own words from last week against him in a nice burn. The scene underlines how difficult it would really be to be in a close relationship with Walt Longmire as well. He may be a good man and a manly man, but that stubborn tendency to bottle everything up and never fill anyone in, whether it’s his deputies on how he figures out aspects of the case, to his daughter and his best friend on his feelings or worries . . . Well, I think it’d be terribly frustrating to deal with Walt on a day-to-day basis. Henry and Cady are a good one-two punch and by the episode’s end, Walt’s sitting down at the Pony with Failes, who lays it out for him. They found the man responsible for the “stabbing,” a thirty-something methhead who had the knife with Martha’s DNA on it still . . . but they found him strangled to death. So he asks his big question of Walt: “Did you do it?” And we cut to extreme close-up of Walt’s stoic face as he says “No.”

So is Walt telling the truth, and will it bring him peace? We’ll have to tune in next summer when Longmire returns for season 2 to find out.

Regarding the season as a whole, I enjoyed it each week and think it was a good introduction to life in Abasaroka. It remains to be seen if the producers can, or are even interested in, expanding the scope and depth of Longmire (a longer run than 10 episodes would probably help facilitate that, A&E!). But it has an amazing wealth of talent in its cast, and a freshness and unique flavor for what’s still mostly a procedural crime show. I’d still like to see Longmire shift into a more serialized drama direction and attain the buzz-generating, award-winning acclaim of a Breaking Bad or Justified or Sons of Anarchy. But it’s a solid wrap-up to a solid season of a good old-fashioned Western mystery show. And maybe, the truth of the matter is that, as Henry would say, “It is what it is.” I’ll have to find my peace with that. All I know is, it’s going to feel like a very long hiatus indeed.