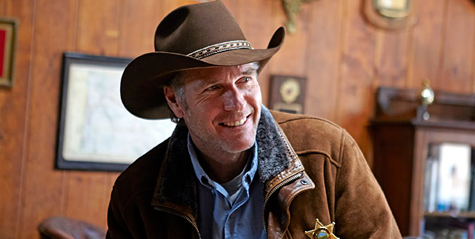 Longmire lightens up a bit this week as Cady comes home, Lizzie shows off her lingerie, and an intriguing figure from Henry’s past pops up. After a strong season premiere, the show squandered some momentum with convoluted mysteries and guest stars who hogged the spotlight, but this week’s a winner, striking the perfect balance between the personal interactions between our favorite characters and the tightly plotted mystery of the week.

Lizzie, the fizzy blonde that Walt’s “sorta” been seeing since S1, makes a triumphant return, luring our sheriff to her candle-bedecked lair (complete with Rainier beer chilling in the ice bucket) on a false B&E call. She makes it clear that she wouldn’t mind Walt doing a little breaking and entering—wink, wink, nudge, nudge—but the flustered man is saved by the bell when Ruby calls with a real emergency. (Ruby, by the way, is like the best c**kblock this side of the Rockies.)

The gang’s bickering (Branch is jealous of Vic’s fancy new truck) when Daddy Walt shows up and tells them to get to work on the week’s major crime. A young woman, Tanya Dove, has been found dead and beaten in an alley, though it’s quickly clear to Walt she was shot elsewhere, with a mystery pill on her that might be oxycodone. Vic and Walt follow up a few leads, investigating her older sister Lorna, an MMA fighter who used to be hooked on pills, and her boyfriend Justin who has a penchant for pot at the very least. They also find a pill bottle prescribed to a Jerry Solomon in her house.

Lorna’s a tough cookie, and goes a few entertaining minutes with Vic in the ring (Vic basically gets her ass handed to her) before opening up and spilling that she hit Tanya out of frustration of learning she was using pills, but didn’t kill her. They trace the pills to a gang of teenage boys who’ve been swiping prescription drugs from people’s homes and selling them, with the help of a shady local pharmacist who supplied them with names of folks who had big prescription orders filled. A name on the list pings for Walt however, and the culprit is Justin’s mom—-who also happens to be Andrea Zuckerman from the original 90210! Andrea confesses tearfully that she thought Tanya was a stranger and shot her when she snuck in (with a key) and tried to ransack the medicine cabinet, then freaked out and dumped the body. It’s a far less convoluted and more organically unfolding mystery than the others we’ve seen this season.

Despite some serious violence (Lorna gets jumped by the teens and beaten badly), there’s a lot of humor in the episode too, including some great one-liners (my favorite might be Vic’s wry observation in response to Walt wondering at how packed the gym is to see women beat each other up: “Every man’s second biggest fantasy.” ) We also get a fun glimpse at Henry’s private side, when his ex, Dina, rolls into town on her way to a 9-ball tournament. Dina’s beautiful and clearly a spitfire, and clearly has some kind of uneasy relationship with Walt, who caustically observes to Henry that “maybe the fifth time will be the charm” for the two of them.

We also get more of Lizzie, as she runs into Cady on the street and very awkwardly introduces herself, only to realize Walt’s never mentioned her to his precious daughter. She shows up later at the station house and sees her gift (the one just liberated from Vic’s drawer last week) still sitting fully wrapped on Walt’s desk. It’s starting to seem like Walt might need a restraining order, but then he finally relents a little and admits he should’ve introduced her to Cady at least.

Meanwhile, Branch has overheard Lizzie mentioning that Cady’s back in Durant, and he hightails it to her house. He says he just wanted to check on her since she went missing, and when she admits to having been in Denver, Branch kindly offers his ear if she’d like to talk. Cady’s more like dear old dad than she wants to admit, however, and she doesn’t, dismissing him pretty handily. Poor Branch. It still seems like Cady is just not that into you. He’s left to keep company with his Branch for Sheriff signs.

Cady does however give Walt the time of day, finally, sitting on his unfinished porch when he pulls up at the episode’s end. She still doesn’t want to talk about what happened in Denver just yet, but admits he was right about how getting answers won’t make her feel better. Cady also promises to come around more often if he’ll finally finish his cabin. It’s a lovely moment between them, with some beautiful cinematography as well.

Next week, Branch and Walt have a debate for the sheriff’s position (and how amusing was Vic catching Branch out with speakerphone about that?). It was nice to see Branch get a little of his own back this week, outsmarting Walt a couple times, after being shoved off to do grunt work for so many weeks. It’s still hard to imagine him as a viable candidate to challenge Walt, not because he’s incompetent at all, but just because we haven’t gotten much chance to see him really shine, since the show is always making Walt pretty infallible with regard to the cases. It’s getting hard to imagine why Walt has kept Branch around all this time and what the aftermath will be like when the election happens later this season. But I guess we’ll just have to wait and see.