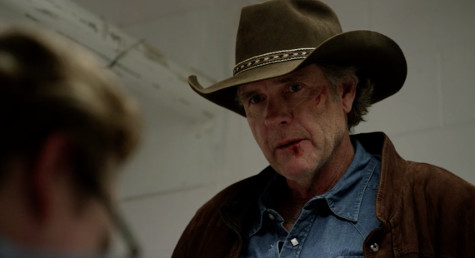 Is that it? After a knock-‘em-down brawl between Henry (Lou Diamond Phillips) and Walt (Robert Taylor) at the Red Pony, Henry won't press charges if Walt will drop the Hector business. Walt agrees, aided by his very worried lawyer reminding him of his upcoming civil lawsuit.

Later, Henry approaches Jacob Nighthorse (A Martinez) and asks if he killed Malachi (Graham Greene), and he seems satisfied with the reply—and the suggestion that Malachi wrote “Hector Lives” with the rocks to make people feel safe after the vanquishing of the casino’s former head of security. Nighthorse has beefed up his security and suggests Hank do the same.

In other tête-à-têtes, Mayor Sawyer Crane (Eric Ladin) calls Nighthorse to his office, looking to gain some of the businessman’s clout—and money—for reelection. In exchange, he’ll take down Sheriff Walt Longmire. I couldn’t really tell by Nighthorse’s expression if he’s excited by the mayor’s offer or not.

Sawyer has requested that the governor temporarily remove Walt from office until the wrongful death lawsuit plays itself out—i.e., after the election in which he’s running on a strong anticorruption platform, which the sheriff’s daily “wild west” news headlines ain’t a-helping. Sawyer lets it slip to Walt that the FBI has some evidence against him but won’t gab more when Walt presses for info. Meanwhile, Tucker Baggett (Brett Rice) quizzes Donna (Ally Walker) on how long after she had been cleared by Walt, as a suspected drug dealer, did they begin dating.

Chance Gilbert is found guilty on all charges and immediately asks to speak to Walt about helping him to land a seat on Death Row, but the sheriff declines saying Chance deserves his twenty-year sentence. Later, Vic, who still suffers trauma from the beating she took at the hands of Chance, agrees to help the clan leader, saying: “I want you to die. I want to wipe you off the face of this earth so I never have to think about you again.” 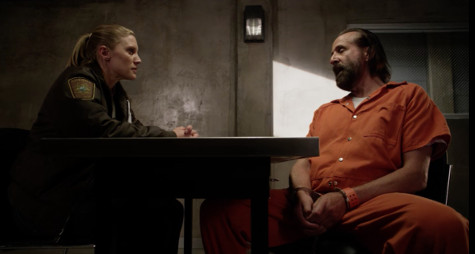 So, get this, Chance admits to killing the federal census worker and directs Vic to where he stashed the gun on the compound grounds. Really, Vic?! You are contemplating going back without realizing this could be a snare? And adding insult to injury, she borrows Ferg’s (Adam Bartley) Trans-Am? Whaaat?

Sure enough, she goes … then WHACK! to side the head as Ida (Genia Michaela) gets the drop on her after Vic finds the weapon. Though it was an exciting mano a mano, I file Vic’s actions under: When Smart Characters Do Dumb Things.

In an episode where Walt proclaims, “It's done. It's not for me to interfere with the law. That kind of behavior's been getting me into trouble,” and shortly therafter, he finagles Ferg’s assistance with the caveat, “… it’s not, strictly speaking, uh, legal,” I’ve gotta ask, what is he doing? Literally, what he’s doing is breaking and entering a private residence without a warrant as a sworn officer of the law to find the evidence that Monte Ford (Stephen Louis Grush) has against him. Walt would’ve gotten caught too if Ferg hadn’t pulled Monte over for running a stop sign.

Regardless, Walt discovers some of the evidence and a whole lot more during a private meeting with Barlow’s estate lawyer, Tucker Baggett. Tucker explains he was made CEO of Connally enterprises perchance Barlow didn’t live—which he didn’t, he died the following day. The lawyer’s plan, after financially decimating the sheriff, is to build a golf course on Walt’s scenic Cheyenne property.

In another “what were you thinking” moment, Henry offers to give a ride home to a woman who claims her jacket and car keys were swiped from the Red Pony. I understand being a good Samaritan, but then he doubles down by offering to go inside her darkened house, you just know that—yes, wait for it—Malachi and his thugs are there waiting for him. The woman turns out to be Malachi’s granddaughter, and the scar-faced hood (Graham is badass with the new look) takes Henry to the Crow reservation and pins him under the unforgiving sun with stakes that belong to Nighthorse. Cady Longmire’s (Cassidy Freeman) perpetual wide-eyes effectively close out the show’s cliffhanger as she participates in a ceremonial sweat. She’s finally accepted into the community—into the tribe. At the ritual, she begins having visions of her father’s house, empty, and she’s walking through blood on the floor. She also “sees” Henry hanging from a noose, alive and making a phone call, presumably for help. Images of her father screaming out and the box with her mother’s ashes in Walt’s otherwise empty house. Evocative imagery that will make Longmire fans wish the next season was now.