Season 5 opens in an outpouring of emotion with Cady Longmire (Cassidy Freeman) imploring, “Please don’t leave me, Dad!” Her father, Sheriff Walter Longmire (Robert Taylor), is writhing in his own blood, shot at home by an unknown assailant.

He’s not laid up for long though. Not since the old Gunsmoke days, when Marshal Matt Dillon (James Arness) could take a slug and keep on tracking, has a hero thrown health to the wind like when the strong-willed, determined Walt leaves the hospital. He’s looking for Dr. Donna Monaghan (Ally Walker), who had been sharing his bed when the assailant struck. Only Walt’s blood is initially found at the scene, so a kidnapping is assumed.

Walt believes there is a connection to the shady oil company that he’s been investigating and that the still-at-large Walker Browning (Callum Keith Rennie) is involved. The Ferg (Adam Bartley) is leaning toward Zachary (Barry Sloane), who Walt had fired, while Victoria “Vic” Moretti (Katee Sackhoff) thinks the wisest choice is to investigate patients of Dr. Monaghan who have been known to do a crazy thing or two like set a van on fire.

In an “I’m not going to take any more of your bull pucky” moment, Vic demands Walt to follow her hypothesis. Walt backs down by saying “fine,” and she snips right back that she’s not asking his permission. (Ouch! There seems to be a new and improved sheriff’s deputy in town.)

In the funniest scene, Vic stops the vehicle when Walt spits out his medication, which he says makes him drowsy. She retrieves the pill off the road and makes him swallow it—going so far as to check under his tongue. Her “You are like a frickin’ four-year-old” putdown had me laughing. And in a move I also applaud, Vic tells Walt that she’s “moving on,” and that can’t come a minute too soon. You might remember from my previous seasons recaps, I was never the biggest supporter of Walt and Vic making more of their friendship.

Chief Mathias (Zahn McClarnon), head of the Cheyenne reservation’s tribal police, has Henry Standing Bear (Lou Diamond Phillips) in a tight spot: he has recovered a .30-caliber bullet that Walt had fired at the man he thought was Hector. Plus, he found Henry’s blood dripped all over leaves at the scene of the crime. Oh, how I love the Mathias character, especially when Henry belittles him that the Feds never support the Res law. Mathias pulls out a needle and sticks Henry, saying this time he has evidence and will pin him for the murder of Tyler Malone. 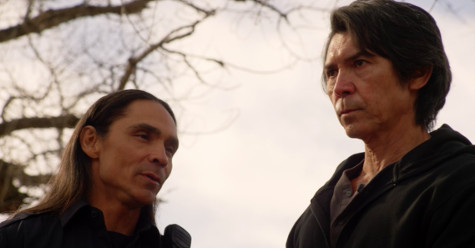 Mathias remains my favorite unsung character. He has a difficult job that Longmire and Henry don’t make any easier by constantly, illegally sneaking onto the reservation. Now, it would seem he’s going to use Henry to continue to play the now mythical Hector, righter of wrongs.

Two leads pop up: Vic and Walt, searching Donna’s house, are surprised to find Donna’s son, Andrew Price (Sterling Beaumon). He’s a real piece of work—he was in his mom’s house looking to swipe some money for his failing nightclub. Andy’s (“It’s Andrew,” he clarifies) fairly intuitive though, guessing quickly that Walt is having a relationship with his mom.

The Ferg lucks out with a nurse who reveals Dr. Monaghan’s suicidal patient’s name is Tamar Smith (Jamie Anne Allman). Not only is Tamar suffering some extreme PTSD, she is also nervous because Walt resembles her commanding officer. There’s also another patient, Duncan Butler (Mac Brandt)—high strung doesn’t even cover it—who has been under Donna’s care for two years. And, Andrew throws it out that his dad isn’t completely over her yet. So we have red herrings out the wazoo, and I gave up trying to deduce who the killer could be—best to sit back and watch the celluloid professionals proceed.

Walt has trouble focusing throughout the episode (the director keeps slightly distorting the camera focus for those moments, though the technique is dated and unnecessary—Mr. Taylor is a terrific actor portraying Walt at a serious disadvantage perfectly, without the added gimmick). Adding insult to injury, Cady picks a fine time to tell her dad she’s working for Jacob Nighthorse (A. Martinez), who is funding a legal-aid operation on the Res. Both father and daughter agree that they need to be forthcoming with what they are up to and quit trying to protect the other’s feelings, which they have been doing ever since Martha Longmire died.

“A Fog That Won’t Lift” ends on a cliffhanger that’s a bit underwhelming. A phone call comes in from the Cumberland morgue saying they have a Jane Doe in the 45 to 55 range. Though, in all fairness, shows like Longmire are designed to be binge-worthy, and this was a sure way for fans to breathlessly wait for next episode to download in 10 seconds.

See also: Longmire 4.10: Season Finale “What Happens on the Rez…”