Absaroka County must be the West’s weirdest and unlikeliest cultural melting pot. First there were the Mennonites, now there are the Basque. This week’s episode, which bears a strong resemblance to season one’s third episode (yet sadly, no striptease interrogation from Vic), explores the strange little subculture of a family of Basque (ex-pats from the French/Spanish border) shepherds. When a mountain biker literally stumbles over the dead body of Marko Vayas, the cause of death is unknown for the young, relatively healthy-looking man and Walt and Vic suspect he might have been poisoned. Their investigation of his cabin leads to them finding a mysterious picture of a lovely young woman. Tracking his brothers Costa and Sal to a local Basque festival (where Walt indulges in a delicacy called barrabillak that I do not suggest you Google), they’re told the girl was a mail order bride Marko was thinking of marrying, but didn’t. Walt calls BS, though, as he's recognized a tiny bird in the picture as being a local breed, meaning she’s from Wyoming.

Meanwhile, Branch is still courting public favor (and showing off his very nice biceps) at various events around town, and Walt is none too pleased to learn he’s going to have to debate his opposing candidate. And in Denver, Cady’s sticking around as long as it takes, she tells Detective Fales, to get answers about her mother’s death.

While Walt makes a call to a friend at the “National Crime Information Center” (Is that a real thing?) to see if Marko had a record, he also nudges him to see if there’s any hits on “that name I gave you a while back.” The guy exasperatedly tells him if anyone checks into “that Henry Standing Bear guy” he’ll call him. Hmmm. Vic, in the meantime, has tried at least 100 mail order bride companies, but without Marko’s computer, they won’t have any luck. Walt says he didn’t have one and then reaches into Vic’s bottom drawer, where *boom* he pulls out the present that Lizzie dropped off for him at the end of last season. Ha! Walt pays it no mind reaching for the phone book that’s in there, but Vic’s reaction is priceless as she alarmedly but subtly tries to nudge the drawer shut again.

They head off to investigate the local guy, who hilariously tries to offer Walt his matchmaking services… much to Vic’s annoyance. I have to admit, I still can’t understand how the show is going to actually get these two together. In the books, Vic’s the aggressor in the relationship and it’s enough of a role reversal and a flip on their professional power dynamics that it mitigates the creep factor and the cliché-ness of a young woman falling for her old-enough-to-be-her-dad boss. But on the show, Vic and Walt’s dynamic is pretty different. They don’t seem to share a sexual chemistry, and while she’s awed by him, he doesn’t seem to have any deeper feelings for her than he does for any of his coworkers. I guess it’s too early for them to take that anywhere serious anyway. Vic’s still married, despite her conflicted feelings, and Walt is still clearly grieving. Maybe by the time they get intimate, if they get intimate, their vibe will change.

But for now, our mail order bride, Rosa, is trying to jump out the back window. Vic makes a righteous jump from a stairwell (kudos to stunt double Tammie Baird) and tackles her, and they bring her and the local guy, Jeremiah, in for questioning. Rosa says Marko was going to sell his land and they were going to buy a house together, but that Marko didn’t want to tell his brothers. While Branch heads off to investigate the land sale with the county clerk, Walt orders Rosa and Jeremiah into the lockup and he and Vic consider if his brothers might have found out about Marko’s plan.

Denver Detective Fales is finally giving Cady answers she wants…although it’s a real “be careful what you wish for” scenario. Turns out her mother left a café after her chemo treatment, and on her way back to the hotel, was attacked, stabbed twice in an alleyway, and died hours later in the hospital. Walt was with her at the time of her death. Cassidy Freeman does some nice work here as Cady steels herself to ask if they ever found the killer. They did; he turned up dead. Cady says she wants to see his face.

Back in Basque country, Marko’s brother Sal tells Walt and Vic how important the land is to the brothers, as it was left to them by their father. As he boasts about the natural springs on their land, preparing to drink from one, Walt tackles him. It’s almost another brawl, but Walt pacifies him by asking if there were any springs near where Marko’s body was found. There were, and when Walt investigates, he finds hemlock in the water supply.

Branch’s check into the land sale leads him to a familiar face: Jacob Nighthorse. His company, Big Pines Timber, was showing interest in Marko’s land. Despite Jacob bankrolling his campaign, Branch steely-eyes him and asks how bad did his company want that land. Jacob bristles but finally admits that his death actually is problematic for them, because they can’t buy it now. When he presses Branch for leads in the case, Brand holds out, despite Jacob sniping, “I didn’t donate $100,000 to your campaign because I like your smile.”

At the sheriff’s office, Ferg is showing Vic and Walt some elderberry leaves he found, which look almost identical to hemlock. Vic shows off her internet prowess by saying probably no one’s died via hemlock since Socrates. Walt lets her and a recently returned Branch in on the fact that the government used hemlock to kill off Native Americans and steal their land back in the ’50s. Branch’s suspicions of Jacob perk up, but he won’t reveal the “anonymous source” he talked to that showed interest in the land.

Sal gets arrested when he attacks the Big Timber folks who are clearing trees. They admit they made a very generous offer on all three family plots a week ago. Walt’s wheels start to turn.

Cady is looking at evidence photos of the dead “supposed killer” and learns he didn’t die of an overdose but an act of violence: someone broke his neck. Detective Fales says this would probably be easier coming from her dad, but Cady says that’s not possible. He tells her to call her if she needs anything, but she declines. As she leaves, Fales muses that she’s either a spy sent by his prime suspect in the murder or his new best friend.

In the jail, Sal gives an impassioned speech about his family history and how much the land means to them, but that if they think land means more to him than his brother, he’s wrong. Walt realizes, with the help of one of the pictures he found in Marko’s cabin originally titled “Death Came in Like Thunder,” that a man like Sal would kill someone face-to-face, but hemlock is a cowardly, sneaky way to kill. And he suddenly knows who did it. 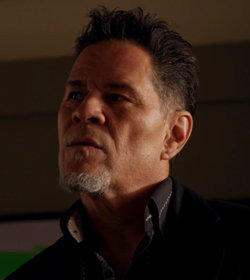 He sends Ferg and Branch to round up Rosa and Jeremiah, although Branch takes a detour to fill Jacob in on developments. But he and Vic find Costa and his wife, Amaya, missing from their house, which looks ransacked. They follow the Vayas’ barking dog to find Costa trying to drown his wife in one of the springs. He says he wasn’t trying to kill her, he just wanted her to admit what she did by selling them out. Walt then reaches down and pulls what looks like hemlock out of the well, saying the poison is taking hold right now of Costa’s wife. She begs for a hospital, but Walt says not just yet. Costas and Sal were out with the herd when the lumber company came and told Amaya that he wanted to sell. She was the one who killed him. She caves immediately saying she had no choice. If he sold his land they wouldn’t have enough room for the sheep and within a year their herd would be half the size and they wouldn’t be able to survive on it. She cries that her husband was too weak and would do nothing if she told him. The National Crime Info Center guy calls back and tells Walt he got a hit on one of those names… Walt storms off to see Henry at the Red Pony. There are things that happened in Denver they never talked about that Walt needs to know, because Fales is investigating him. Henry basically tells him that he won’t ask him to lie or protect him, and that he nearly died once before in the process of trying.

Walt grits out that it wasn’t Henry's place to kill that man, it was Walt’s right. (Ooh this is getting dark!) Henry intensely says, “A good woman was murdered. A bad man is dead. End of story.” Then after his seeming confession, he says he’s sure Fales will find nothing on Henry. Walt asks how he can be sure and Henry says for a spiritual man, Walt sure needs to have more faith in his friends. And then they angstily do shots! Because nothing makes a quasi-murder confession go down easier than a little hard liquor!