Sandie Jones, author of The First Mistake, takes us through the dark history of London’s serial killers and lets us know what mistakes they made that led to their capture. Make sure to comment for a chance to win!

With centuries of history to dive into, the U.K. has borne some of the most notorious serial killers the world has ever seen. But it’s the streets of London that have seen the grisliest goings-on. From as far back as the early 1800s, the once poverty-stricken areas either side of the River Thames have witnessed poisonings, stranglings, and deaths by acid bath. The killers were clever and careful, and the police were baffled by the growing list of missing persons. But complacency started to set in—it always does, and thank goodness, for if it weren’t for their slip-ups, the victim numbers would have soared. But what caused their ultimate downfall? I looked into each case to discover their First Mistake…

A physician and surgeon, it is believed that Cream killed his first victim in 1876, although his wife’s cause of death was initially recorded as “consumption.” But in 1879, a woman who he was allegedly having an affair with was found dead in an alleyway behind his offices, pregnant and poisoned with chloroform. Accused of her murder, Cream fled to the U.S, where he is thought to have killed at least another four people.

In 1891, he set sail back to London and settled in Lambeth Bridge Road, but within a year, four prostitutes were murdered after accepting a drink from Cream which was laced with strychnine.

HIS FIRST MISTAKE…was offering an American visitor a tour of where the victims had lived and met their fate. Alerted by Cream’s detailed knowledge of each case, the tourist mentioned it to a policeman and Scotland Yard put him under surveillance.

Pearcey invited Phoebe Hogg to her home where she bludgeoned her to death and smothered her eighteen-month-old daughter. Later that same night, she brazenly pushed Phoebe’s pram around the streets of North London, though it is not known whether the child was in it and already deceased or whether the pram was used to transport Phoebe’s body, which was later found under a pile of rubbish in Hampstead.

HER FIRST MISTAKE…was the sheer audacity she displayed by wheeling her murder victims out for everyone to see. Passers-by, suspicious of her behavior called the police who found her home splattered with blood. If we’d had the benefit of DNA testing back then, we would have been able to deduce if Pearcey was, in fact, the Ripper, as stamps licked by the prime suspect were analyzed in 2006 and found to belong to a woman.

Christie admitted that his murderous spree started in April 1943 when he met an Austrian prostitute who, despite being married, he took back to his small flat in Rillington Place. His wife Ethel was visiting friends when he murdered the girl by strangling her and burying her in their back garden.

Over a ten year period, he killed at least eight people including the wife and baby daughter of Timothy Evans, a neighbor in an adjoining flat. Although police searched the house and garden, they didn’t find the bodies that had been stored in an outdoor wash-house, although when they did, during a later search, they arrested Evans. Christie gave evidence against the man in court and he was convicted and sentenced to death by hanging in 1950. It wasn’t until sixteen years later that he was pardoned after Christie admitted to the killings and others since.

For more on this case, check out Death in the Air by Kate Winkler Dawson

HIS FIRST MISTAKE…was subletting his flat because when the new tenants went to hang a bracket on a wall, the wallpaper came away to reveal a hidden alcove, in which three bodies were stacked.

One of London’s most recent and prolific serial killers, Nilsen murdered at least twelve men by luring them to his flat in Muswell Hill between 1978-1983. His victims were mostly homeless or homosexual, and his subsequent treatment of them was sexually motivated. He admitted to pleasuring himself after the killings and had a macabre fascination with the changing state of their bodies once their lives had been snuffed out. On occasion, he would bathe the bodies, clean and dress them before leaving them in his flat for weeks or months afterward.

When he eventually tired of them, he’d carefully dissect the flesh from the bones and dispose of the remains by burning them on a bonfire or flushing them down the toilet.

HIS FIRST MISTAKE…was calling in a drain clearing company after he and other residents noticed that they were getting blocked. When the engineer opened the drain cover, he discovered it was packed with a flesh-like substance and small bones. On seeing it himself, Nilsen commented that it looked like someone was trying to flush their KFC away.

Perhaps the most distressing of all, the woman known as The Baby Farmer is thought to have killed hundreds of babies who were given up for adoption in the belief that she would care for them. Instead, she accepted the upfront payment and box of clothes that were destined for the pawnbrokers, before tying tape or cord around the youngsters’ necks and disposing of their bodies in the River Thames.

She’d cruelly tell the parents’, many of whom were hoping to reclaim their children once they were in a better position, that everything was fine. On one occasion, when a mother visited, she was shown a baby who she knew not to be hers because it didn’t have a birthmark on its hip.

HER FIRST MISTAKE…was wrapping a tiny corpse in paper that identified her and gave an address. When the “package” was found floating in the Thames, it was enough evidence to put Dyer under surveillance.

Listen to an audio excerpt of The First Mistake now! 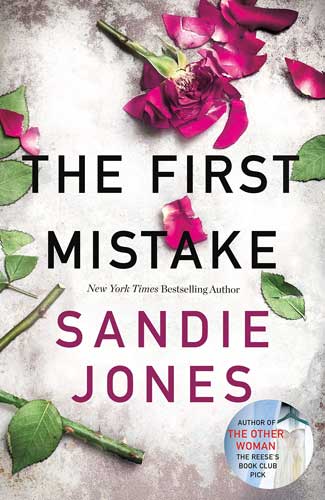 About The First Mistake:

From Sandie Jones, the author of the Reese Witherspoon x Hello Sunshine Book Club Pick and New York Times bestseller The Other Woman, comes an addictively readable new domestic suspense about a wife, her husband, and the woman who is supposedly her best friend.

THE WIFE: For Alice, life has never been better. With her second husband, she has a successful business, two children, and a beautiful house.

HER HUSBAND: Alice knows that life could have been different if her first husband had lived, but Nathan’s arrival into her life gave her back the happiness she craved.

HER BEST FRIEND: Through the ups and downs of life, from celebratory nights out to comforting each other through loss, Alice knows that with her best friend Beth by her side, they can survive anything together. So when Nathan starts acting strangely, Alice turns to Beth for help. But soon, Alice begins to wonder whether her trust has been misplaced . . .

Comment below for a chance to win a copy of The First Mistake by Sandie Jones!

The First Mistake Comment Sweepstakes: NO PURCHASE NECESSARY TO ENTER OR WIN.  A purchase does not improve your chances of winning.  Sweepstakes open to legal residents of 50 United States, D.C., and Canada (excluding Quebec), who are 18 years or older as of the date of entry.  To enter, complete the “Post a Comment” entry at https://www.criminalelement.com/londons-serial-killers-sandie-jones/ beginning at 2:30 p.m. Eastern Time (ET) June 11, 2019. Sweepstakes ends at 2:29 p.m. ET June 25, 2019. Void outside the United States and Canada and where prohibited by law. Please see full details and official rules here. Sponsor: Macmillan, 175 Fifth Ave., New York, NY 10010.

Sandie Jones has worked as a freelance journalist for over 20 years and has written for The Sunday Times, Woman’s Weekly and the Daily Mail, among other publications. She lives in London with her husband and three children. The Other Woman is her debut novel.