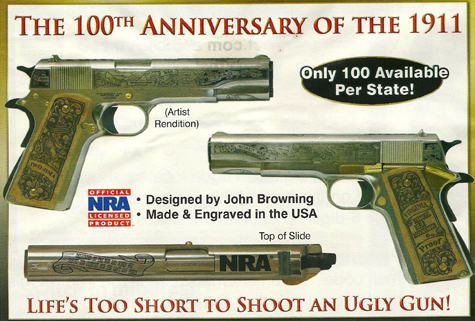 The first verse of one of my favorite Dorothy Parker poems, “Frustration,” goes:

If I had a shiny gun,
I could have a world of fun
Speeding bullets through the brains
Of the folk who give me pains

Naturally, when I got the advertisement above in the mail the other day, that was the first thing I thought of.  The second thing was “but that is an ugly gun!” Of course, beauty is in the eye of the beholder and all that. The third thing was “only 100 per state? That doesn’t seem very limited to me.” Of course, I am probably (definitely) not their target audience, witnessed by my final thought (right before: “I have to share this on Criminal Element”), which was “I usually fire guns and shoot people, not the other way around.” Of course, I am not quite certain what a “pretty” gun would look like.  I’m not precisely the Hello Kitty gun type, either. Plus, the grip on that one doesn’t look too comfortable, what with all those crystals cutting into your hand while you’re trying to hang on. And it would attract a lot of attention in a firefight.

In that respect, your life might actually be longer if you did shoot a plain, ugly, matte-black gun.