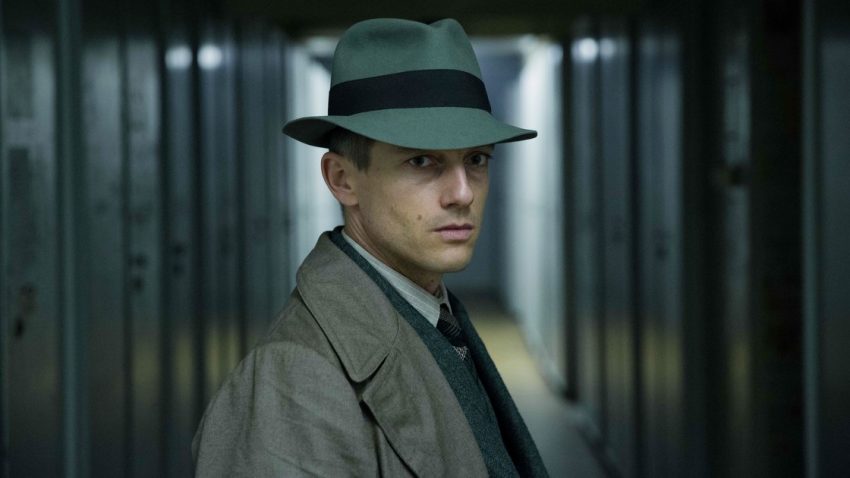 Despite its utter failure to provide stability for the German people between the wars, the late Weimar Republic has been fabulously successful in another regard: providing the perfect morally dubious backdrop for generations of spy, political, and crime thrillers. If noir ever lived anywhere, it was in Weimar Berlin—amidst political and economic upheaval, social unrest, an exploding sexual revolution, corruption, violence, a vast gulf between the rich and everyone else, and as the crossroads of central Europe, the collision of actors good and bad from all points of the compass. If you can’t write dark in this setting, take up knitting instead.

Volker Kutscher, a German newspaper editor, needn’t start making granny squares anytime soon. His seven-book Gereon Rath hardboiled detective series is a bestseller in his native land. The first three novels are now available in English translations; a graphic novel adaptation followed shortly; and now, Babylon Berlin, the first two seasons of a hit German TV series based on the books, has crossed the Atlantic through the good offices of Netflix.

The setup: Cologne-based police inspector Gereon Rath (Volker Bruch: The Reader, Generation War) goes to 1929 Berlin to track down some old-school pornos featuring the great and good of the Weimar government. In the process, he becomes entangled in the investigation into the torture and murder of a man found floating in a local canal. This leads him to an underground war between Soviet agents and a cell of Trotskyite Russian expats, smuggled gold, illegal arms trading, political street battles, police corruption, and secret armies. He also discovers Charlotte Ritter (Liv Lisa Fries, a German TV regular), a plucky young typist from a dirt-poor, working-class family, who aspires to become a police detective.

Rath has more than his share of problems. He suffers from what was then called shell shock (now PTSD) from his service on WWI’s Western Front; he self-medicates with morphine, to which he’s now thoroughly addicted. A devout Catholic, he lives in a state of perpetual guilt over his long-standing affair with the wife of his missing-in-action brother. Bruch plays Rath as an old man in a young man’s body, with a careworn look and thousand-kilometer stare. The manic energy he emits while drunk and stoned in a nightclub and the complete physical disintegration that comes when he’s crashing off those highs both look lived rather than acted.

Charlotte is a guttersnipe charmer. She’s not above literally lying, cheating, and stealing so she can provide the only regular income for her hopelessly broken family. For her, turning tricks at the mega-cabaret Moka Efti is a savvy part-time employment option rather than any kind of abasement. Fries gives Charlotte an elfin smile, a sassy attitude, a quick mind, and a visible hunger to get ahead. Even if you’re put off by Rath’s multitude of demons, you can’t help but root for Charlotte as she lunges for her police inspector’s shield.

There’s a lot going on in this story. I count at least four major plotlines with much side business in between. This isn’t a show you can have playing in the background and still hope to keep up. The dialogue feels naturalistic—peppered with period expressions and German idioms—and is delivered without a lot of frills. Pro tip: watch this show with the original German soundtrack and English subtitles. The dubbed soundtrack sounds muddy, and English is the wrong language to match the visuals.

The production design is handsome and remarkably atmospheric. What’s on the screen looks like a big-budget movie rather than a TV detective show. The palette is muted, with lots of shades of gray (like the story). Color disappears almost completely in the suitably filthy and distressed tenements and workshops; the cafés, cabarets, and haute restaurants are riots of gilding, crystal, color, and light. As you’d expect for the milieu, a lot of Babylon Berlin happens at night, which both hides the rot and accentuates the glitz.

The costumes and cars are carefully period-correct. If this series had been made in America, everyone would be beautiful and healthy. But it wasn’t, and it’ll dawn on you by the third or fourth episode that the people also appear period-correct: pale if not sallow, bad teeth, unwashed hair, dirty fingernails, mended clothes. The rich characters at least seem well-fed, but they don’t resemble rich people today. They all look like they stepped out of 1920s news photos.

Babylon Berlin makes the most of its big budget, its actors, and its fever-dream setting. If your only previous brush with Weimar is Cabaret, be warned: this ain’t that. What you’ll get instead is an absorbing story, a visceral recreation of a unique time and place, and enough grit to make frequent hand-washing seem a good idea. If you’d like to see noir pushed to its logical conclusion, check out this series on Netflix.