April 29, 2021
Last Call is the gripping true story, told here for the first time, of the Last Call Killer and the gay community of New York City that he preyed upon. Read an excerpt below!

PLUS: Comment to enter for your chance to win a signed copy of Last Call!

The Townhouse was already on the radar of detectives, thanks to the investigation into Peter Anderson’s murder. When they visited the bar to conduct interviews, regulars were guarded, reluctant to talk. “The homosexual community wasn’t very open about what they were doing in their private lives,” said Kuehn.

Nevertheless, detectives found Douglas Gibson. A blond-haired, blue-eyed twentysomething adorned in Brooks Brothers, Gibson made commercials for Pennzoil. He’d been a Townhouse regular since the night it opened in 1989. Not because he liked it all that much—it was snooty, he thought, with its dress code and plush couches and oil paintings—but because he owned an apartment on the same block. Oh, and the Townhouse fed his lifelong affection for older men. He liked them over sixty, generic-looking, Midwestern, and white-haired. Best-case scenario, that meant Johnny Carson. In practice, however, the staunch liberal Democrat was attracted to a lot of Republicans he “absolutely despised.”

Tom and Gibson were introduced that night by a mutual friend, around 10:30. The three talked for a bit. Then, in deference to Gibson’s affection for men precisely like Tom, the friend excused himself. As the melodies drifted up from the piano, surrounding the patrons who stood in a crush, they talked and talked, about Boston and New York, the Red Sox and the Yankees. Gibson, who preferred men who were married, divorced, or widowed, was deeply attracted to Tom, who was married and, although he didn’t live in New York, could theoretically be available whenever he visited on business. No relationship, no commitment: perfect. Gibson thought the probability that he would take Tom home that night was high.

They were a study in contrasts: Gibson, out since he was three years old, had been sleeping with men since he was a kid on an Air Force base, whereas Tom had spent his life in the closet. As they stood by the bar, it seemed to Gibson that, despite their differences, the attraction was reciprocal. But as the conversation progressed, Gibson noticed Tom glancing over his shoulder. A man standing by the piano had caught his eye. Gibson had known him by sight for five years, but they’d never spoken to each other. Average looking and nearly five ten, he guessed, with medium-brown hair.

Disappointing, of course, but not unreasonable. “This is my only night in New York,” Tom said. It had happened before and it would happen again, Gibson reasoned. It was a gentle kiss-off, with the understanding that, should nothing better come along, he’d circle back. As Gibson liked to say, he was frequently accused of being “president of the Better Offer Club.”

“You’re not going to find anything better than me,” he told Tom, “so go right ahead.”

Gibson walked to the bar downstairs, where contemporary music rippled from the speakers. He stayed for the length of a drink—perhaps twenty minutes. When he came back upstairs, he saw Tom and the man talking. Giving a harder look, Gibson made a note that Tom liked dumpy, pudgy types. He went back downstairs for another drink. When he returned, they were gone.

Two days later, at six in the morning, detectives from the Seventeenth Precinct knocked on Gibson’s door. As the last person known to be with Tom, he was the prime suspect. They took him down to the station and “put me in the box.” Gibson was numbed by the news of Tom’s death. But at first he wasn’t even sure who the detectives were talking about, because he was a social guy. Which man are you referring to? What saved him, he assumes, is that Townhouse bartenders could attest to Gibson’s presence long after Tom left, until closing time. It helped, too, that Gibson had no car and could not have easily driven to New Jersey.

After the murder, Gibson recalled that initial connection he felt with Tom. It wasn’t survivor’s guilt, exactly, but he wondered: Why didn’t I fight a little harder?

When police began investigating Tom’s murder, Margaret realized that, sooner or later, the kids would find out about their father. She took them to the therapist who, not so long ago, had seen Margaret and Tom. The kids learned of their dad’s attraction to men.

Tracey’s reaction was, Okay, is this why he was killed? It made more sense than some of the stories she’d read in the papers. The gambling angle, for instance. Tom may have traveled to Atlantic City, investigators told a reporter. They theorized he had been killed over a gambling debt. There wasn’t much to the idea, however, save for Tom’s body being found thirty miles away. In any case, detectives quickly ruled that out, they told the Globe, because there was no record of Tom gambling in Atlantic City, “and his financial standing was excellent.”

Tracey began to think about her dad, about the little things that were unusual about him. Suddenly he began to make more sense. He loved old Hollywood and La Cage aux Folles. He adored show tunes, particularly A Chorus Line. (A colleague remembered his attending a Boston production of Shear Madness, a long-running musical about gay hairdressers and murder.) Tracey remembered how stylish he was, how Tom was more attentive to his appearance than the average dad. “He was what you would consider nowadays as a metrosexual.”

On July 16, with the investigation in full swing, the Mulcahys held the funeral. Four hundred friends, family members, and colleagues filled the pews at Our Lady of Fatima Church in Sudbury. Tracey addressed the mourners. “It is ironic that someone filled with so much love was taken from us in a crime by someone filled with so much hate,” she said, and read from a letter she wrote just hours after learning of her father’s murder. Her siblings also spoke. Her brother asked mourners to pray for “victims of urban violence.” A friend of Tom’s read telegrams of condolences and remembrances from all over the world. The crowd sang hymns, including “All I Ask of You.”

Persons come into the fiber of our lives,

and then their shadow fades and disappears.

All I ask of you is forever to remember me as loving you.

All I ask of you is forever to remember me as loving you.

A procession brought Tom’s remains to a cemetery, where he was buried under the boughs of a dogwood.

Detectives could not establish either a crime scene or a viable suspect. There was no conceivable motive, either. “We had no idea,” recalled Matthew Kuehn. “I mean, due to the way that the body was dismembered, we felt that he really pissed somebody off.”

What they had were garbage bags, which they presumed would yield fingerprints. The cyanoacrylate fuming, the process by which prints were to be lifted, was not done under ideal circumstances. Instead of being performed at the state crime lab, the processing was done in a mobile unit. The chamber, which should have been airtight, wasn’t, and the attempt to lift prints failed. (It’s unclear, even now, why the bags weren’t simply reprocessed by the state police.) As a result, no fingerprints from the maintenance-yard trash bags were recovered. Investigators did, however, extract DNA from a latex glove, and searched for a match in the FBI’s Combined DNA Index System, a database of samples left by convicted offenders. This, too, yielded nothing.

Kuehn and his colleagues looked into the provenance of the bedsheet and shower curtain. The bedsheet, king-size and beige, was sold during an eight-month window in 1984 and 1985, mostly at stores such as J. C. Penney and Macy’s. The shower curtain, a Saturday Knight Ltd. Manufactured in January 1992, sold for $14.99. It could be found at Kmart, among other retailers. Neither item could be traced to a home, a hotel, or a motel.

Detectives were surprised and disappointed. But they learned something important: the origins of the keyhole saw and latex gloves. The bag containing the gloves had an SKU number traced to the only CVS branch on Staten Island. The sticker on the saw was traced to Pergament, a chain of home improvement stores. There were thirty-two Pergaments in New York and New Jersey, two on Staten Island. One was across the street from CVS.

Detectives thought there was a distinct possibility the perpetrator lived or worked on Staten Island.

Not long after Tom’s body was found, detectives completed a ViCAP form, searching for similar crimes. They learned of a homicide from the year before that struck them as usefully similar: Peter Anderson had been mutilated and left in a fifty-five-gallon trash barrel. Like Tom, he spent a part of his last night on earth in New York’s Townhouse Bar.

“At that point,” said Kuehn, “you’re looking at a potential serial killer.” 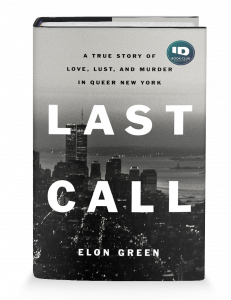 Last Call Comment Sweepstakes: NO PURCHASE NECESSARY TO ENTER OR WIN.  A purchase does not improve your chances of winning.  Sweepstakes open to legal residents of 50 United States, D.C., and Canada (excluding Quebec), who are 18 years or older as of the date of entry.  To enter, complete the “Post a Comment” entry at https://www.criminalelement.com/last-call-by-elon-green-featured-excerpt beginning at 12:00 a.m. Eastern Time (ET) April 29, 2021. Sweepstakes ends at 11:59 p.m. ET May 7, 2021. Void outside the United States and Canada and where prohibited by law. Please see full details and official rules here. Sponsor: Macmillan, 120 Broadway, New York, NY 10271.