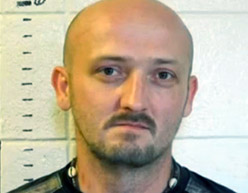 An accused murderer escaped from jail because he was allowed to watch fireworks in celebration of the 4th of July.

According to the fine folks at KYTV-TV, accused “Kool-Aid” killer Jason McClurg was brought outside in the yard with about nine other inmates to watch a fireworks display that was taking place. During the show he saw an opportunity to escape. Which he did.

McClurg was charged in May with the first-degree murder of his wife. Authorities say McClurg tried to kill her by combining prescription medicine with the Kool-Aid drink. When the first attempt failed, he tried again the following day and succeeded. McClurg allegedly got her to drink the poisoned drink by telling her it was made for her by their 2-year-old child.

McClurg was found in a camper in Winona, Missouri, shortly after his escape.