TV’s Gunsmoke ran over twenty years, 635 episodes (1955-1975), and five television movies (1987-1994). Given such a popular, high-quality series it would be foolish—darn near impossible—to say these are definitively its greatest adventures. So I’ll call them almost two fists’ worth of the most memorable tales, and, please, challenge me in the comments with your own selections.

John Wayne introduces Gunsmoke’s debut episode and the program’s lead actor Jim Arness by explaining to the viewers that what they are about to watch is an adult Western and that “you might as well get used to him, like you’ve had to get used to me.” The actors are far from establishing their characters, but all the elements are in place with a distinctive first plot featuring gunslinger Dan Grat (Paul Richards), who goads people into showdowns, when he gets the upper hand on Matt, nearly killing him. After recovering, the marshal discovers why the killer prefers to be a bit too close when engaging a fire fight and uses that knowledge to his advantage.

Note: These early episodes opened with Matt wandering among the headstones on Boot Hill, observing the “Gomorrah of the Plains” (Dodge City) in the distance. These deliberations (via James Arness’s voiceover) about the city, his role, or some other philosophizing point allows us to get into the mind of a hero that would become much more closed-off as the years passed. In the episode’s opening, Matt somberly muses, “It never bothered me, killing a man whose very existence was an offense to the company of decent people.” What has him doggedly pondering this thought is Crego (played by Charles Bronson), who only challenges opponents who he is confident he can kill outright. What separates this episode from so many others in the canon is that Dillon goads Crego into an ultimate showdown before he can murder anyone else. Matt also places a lot of trust in his number one sidekick, the limping Chester Goode (Dennis Weaver), who delivers admirably—bonding these two even closer.

Fun trivia: IMDb tips us off to the factoid that Matt wears, in one day, different clothes in the scene with the gypsy than he does elsewhere in the episode. When the marshal was able to sneak off and changes clothes twice is anybody’s guess. Matt single-handedly gets the upper hand on four bank robbers, and in the process, kills three. The remaining hardcase chastises the marshal for murdering his comrades, treating them like meat. It seems the words strike a deep chord, because Matt surprises everyone by quitting his marshal job. He begins whittling away the days playing checkers with Doc Adams (Milburn Stone) and taking saloon proprietress Miss Kitty Russell (Amanda Blake) for picnic lunches. But when a gunslinger, a friend of one of the dead gang members, comes calling for revenge, Matt straps on his pistol. The episode closes with him riding back into town. The drama would have been heightened if this had been a full hour-long episode, because we bounce a little too fast between worn-down Matt, on-the-mend Matt, and back-to-business Matt. Still, this is an essential episode in understanding the marshal’s inner demons. Only a year after “The Killer” and the job’s strain was wearing him down. “Bloody Hands” is the very definition of a ’50s adult Western.

Note: The gunslinger who seeks revenge is played by none other than Russell Johnson, who went on to fame as the more heroic professor on Gilligan’s Island. 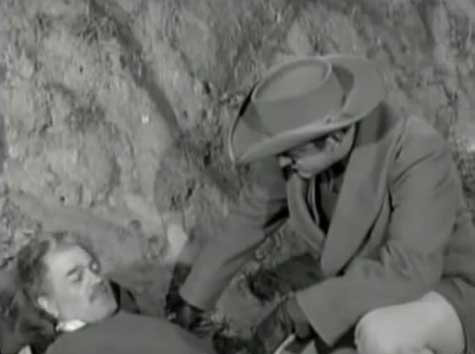 Deputy Chester Goode and Doc Adams are returning from an assignment, when they spot a wounded man who has been left by his partners for dead. The men return, and a shootout occurs. Doc is shot before he’s able to finish treating his patient, and now Chester has to care for two wounded men while two more are out to kill them. Doc coaches Chester how to remove the bullet, but once it’s accomplished, the sawbones needs strength or he will die. What Chester has to do to find nourishment for a weakened Doc figures into the sobering conclusion.

In a 2002 interview for the Archive of American Television, Dennis Weaver said the original script didn’t work, and so he and Milburn Stone “changed totally” the story on the way to the set. He goes on to say, with justified pride, “It was selected for the archives in Washington, D.C. as an example of half-hour Western drama.” An additional highlight is seeing Ken Curtis, who would go on to play Festus after Dennis Weaver departed the series, interacting with Weaver and Stone sans his familiar accent. I’m not sure I ever saw John Drew Barrymore turn in a bad performance; here he once again excels, if a bit understatedly. He plays the notorious Mace Gore (how’s that for a bad guy moniker?), who, along with his criminal gang overrun Dodge City. Mace is more businessman than gunslinger, treating the pilfering of Dodge as a methodical enterprise, even treating and chastising subordinates like mercantile employees. Things take an ominous turn when Matt is blasted with four bullets (yes, he gets shot often in the show’s run) and is presumed dead. It’s up to Deputy Festus Haggen (Ken Curtis) to fool Mace into staying just a few hours longer until a regiment of Troopers arrives by train. During that long wait, Doc Adams will use all his skills to keep Matt alive. The only thing better than a storyline with Bette Davis playing a crazed, vengeful woman is one backed by solid co-stars. “The Jailer” is all that with Bruce Dern, Tom Skerritt, and Judy Sommars playing the kin of Davis’s disturbed character. Embittered Etta Stone and her boys lock up Matt Dillon and Miss Kitty with the intention of executing Matt for the death of her husband. “On the morning of the second day you will hang”, she drones with sharp-tongued menace. In case you think she’s posturing, she backs it up by killing one of her own sons when he tries to sneak Kitty to safety.

Ms. Davis could most likely have done this role in her sleep, but when she approaches her husband’s grave, mournfully inquiring what she will do after her vengeance is satisfied, you see a woman whose deep hatred is the only thing holding her up, and an actress living up to her legendary status. 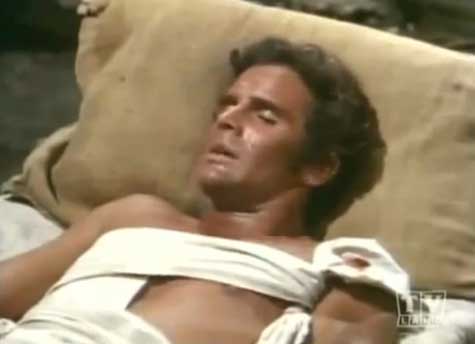 Four outlaws rob the Express office in Dodge City, and, while fleeing, one named Pike (Dack Rambo) is severely wounded. The others divvy up his share and are about to leave him to die when Pike pulls a hidden gun, gets the drop on them, taking the money and escaping. He’s discovered unconscious by lovable, cantankerous, and tobacco chomping Sally Fergus (Jeanette Nolan). She nurses him back to health in this two-part episode and also becomes a mentor of sorts for the wayward young man. Because of the popularity of these two misfits, a spin-off series, Dirty Sally, was commissioned. It only lasted for 13 episodes, having an unfortunate time slot against Sanford & Son.

Note: IMDb notes this episode, written by Jack Miller (Road to Salina), was heralded as the Outstanding Episode of the Year by The Cowboy Hall of Fame. Well, this is a fine thing! After nineteen years of courting Miss Kitty, the first woman we really see him romance is Michael Learned (Later Olivia of The Waltons). But he has a good excuse … he’s suffering from that old television standby of amnesia. He has been shot by an outlaw (Victor French) and left for dead. But his faithful horse travels for water, finding it at the lone-woman ranch of Mike Yardner (Learned). Mike uses her dog to locate Matt and is able to return him to her home to recuperate. Since the outlaw haa stolen Matt’s badge and other identification, Matt is left to slowly work his memory back with Mike’s gentle prodding.

Note: Amanda Blake had passed away when production began on 1990’s Gunsmoke: The Last Apache, so the Mike Yardner storyline was dusted off for a reprise. We learn then that Matt Dillon had a bigger part in “Matt’s Love Story” than we realized, which resulted in a daughter named Beth. Abraham Wakefield (Morgan Woodward) and his five sons live high on a mountain, taking refuge from society after the matriarch of their family is killed by rogue lawmen. Abraham does very well instilling hatred for society in his sons, and from time to time, they engage in raiding parties, killing innocents. Matt Dillon has tracked one of the boys to their cabin and kills him in a shootout, but then the marshal is captured by the Wakefield crew and held hostage. Abraham is mentally unhinged and goes into long periods of stillness where he imagines he’s once again living happily with his wife. But in one “lucid” moment, he gives Matt an hour’s head start on the mountain, after which he will be hunted down like an animal. During the tracking, Matt downs a second son, literally, by throwing him off a ledge. When the other Wakefields find the body, a remaining sibling states the obvious, “He ain’t no ordinary man!”

Best scene: Matt is challenged by one of the Wakefield boys to an arm-wrestling match where the loser’s hand will be impaled by a knife sticking up through a slot in the table. That the Gunsmoke cast and crew were still producing such compelling, popular television fare in their nineteenth season is a testament to the show’s enduring quality.

Let me know what you think in the comments, and if you haven’t watched Gunsmoke, may I suggest you warm up your trigger finger with these.