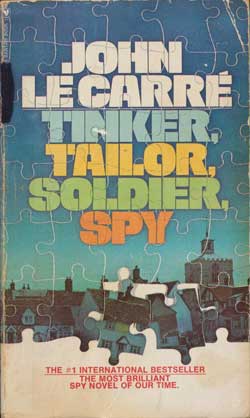 In 1974’s Tinker Tailor Soldier Spy, we finally have an account of George Smiley as a full-fledged intelligence officer after thirteen years on the scene. In the first two novels of the series—Call for the Dead (1961) and A Murder of Quality (1962)—Smiley functioned more as detective that could have easily fit into a G.K. Chesterton Father Brown mystery as he pieced clues together to solve murders. Entertaining, mind you, but not the sort of exploits you expect from a master spy. In the groundbreaking The Spy Who Came in From the Cold (1963), the door was cracked open a little farther and we see him functioning as a ‘puppeteer’ of sorts pulling the surreptitious strings to bring down a communist agent. The Looking Glass War (1965) is almost a footnote; Smiley makes what amounts to an extended cameo that his creator John Le Carré concedes (in a 1991 forward to the then latest paperback) was miscast. It would be a nine-year break between Glass War and Tinker Tailor Soldier Spy but Le Carré wasn’t resting, and he delivered in a very big way.

Tinker Tailor opens in late 1973 with a discredited Smiley forcibly resigned from The Circus along with his boss and mentor Control (who soon after dies from natural complications), after a mission goes horribly wrong—an assignment Smiley had helped shepherd—involving an agent named Jim Prideaux being shot and apprehended by Russian soldiers and then later tortured. Smiley now fritters his days longing for his wayward wife, Lady Ann, and fearing “that one day, out of a past so complex that he himself could not remember all the enemies he might have made, one of them would find him and demand the reckoning.” 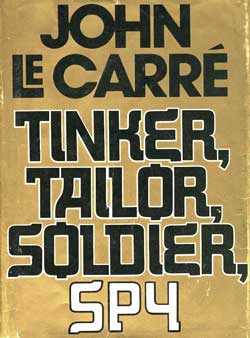 The man who comes calling is a former subordinate and friend named Peter Guillam who still works for The Circus though in a more limited capacity, or, as he explains it, that “under lateralism our autonomy is cut to the bone.” The motive for Guillam’s visit: a field agent named Ricki Tarr—a scalp-hunter whose job is to recruit foreign agents and flip them for British intelligence—falls in love with a woman named Irina who claims she has information on a mole codenamed Gerald who is at the very top of The Circus. Irina tells Tarr, “Have you heard of Karla? He is an old fox, the most cunning in the centre, the most secret; even his name is not a name that Russians understand.” But before London can bring her in for further debriefing she’s snatched away by the Russians. Tarr, on the run, eventually turns to Guillam and Oliver Lacon (who oversees the spy services) with Irina’s information. Now with a traitor in the mists and with no one else to turn to, Smiley is recruited for the hardest assignment of them all: to spy on the spies.

Smiley’s first order of business is instructing Guillam to swipe a file labeled ‘Testify’ to shed light on the night Jim Prideaux was captured but, not surprisingly, all data is scrubbed clean. Smiley and company then dig deeper with their methodical investigation operating on the fringe edges of the Circus community with leads and tips from former agents and contractors who were also brusquely dumped from active duty once the mole had gained traction and began burrowing. Smiley unearths ‘Operation: Witchcraft’ and a man known as Karla—the one Irina had mentioned—who is a Russian intelligence officer. Smiley establishes that Karla (who he had met years before) is controlling Gerald. But which head at the top of The Circus is Gerald and how deep do his tentacles run?

It’s all here … a dam bursting with all the spy genre greatness an aficionado craves and then some. Le Carré’s novel was also a significant real-life cultural milestone. Similar to the aftermath of The Godfather that found real-life mobsters adapting the language of the Mario Puzo’s creations, thanks to Tinker Tailor terms like “scalphunters,” “Ferrets,” “Wranglers,” and “Lamplighters” became the jargon of spy agencies on both sides of the Atlantic. A 1979 BBC mini-series based on the book cast Sir Alec Guinness as Smiley further cementing this character as the ultimate spy. Of course, the only competition at the time was the cartoonish Moonraker featuring James Bond in outer space dodging lasers and battling an opponent with steel teeth. Competition is obviously too strong a word.

An additional strength of Tinker Tailor, really any Le Carré book (recent examples include The Constant Gardener, The Tailor of Panama), is tantalizing supporting characters who have their own distinctive voices. Jim Prideaux, Peter Guillam, Ricki Tarr, etc., could have all been the main focus of their own novels. The fact that Le Carré juggles them so proficiently to enhance Smiley’s finest hour is a testament to the writer’s superlative gifts. If The Spy Who Came in From the Cold is the greatest spy novel, as I’ve previously asserted, then Tinker Tailor is certainly the top George Smiley adventure. An important literary masterstroke that’s not to be overlooked for even those not normally appreciative of cloak and dagger novels. The novel transcends the genre. And the good news is that Smiley was just getting started. The Honourable Schoolboy, Smiley’s People, and his fitting coda, The Secret Pilgrim, lay ahead.