Jeffery Deaver’s Carte Blanche, his continuation of Ian Fleming’s James Bond series, was released yesterday. In this book, Bond has given up smoking, excessive drinking, excessive womanizing, and is dealing with a post 9/11 world.

“Bond shifted position again. In his thirties, he was six feet tall and weighed 170 pounds. His black hair was parted on one side and a comma of loose strands fell over one eye. A three-inch scar ran down his right cheek.”

“He was a secret agent, and still alive thanks to his exact attention to the detail of his profession.”—Casino Royale

What do you think of Deaver’s revamp, whether you’ve read it or not (take a peek here at the first two chapters of Jeffery Deaver’s Carte Blanche)? What other iconic detectives would you want a current author to take on—or what detectives should never be touched (Nero Wolfe, Hercule Poirot, Lord Wimsey, Sam Spade, Father Brown, etc.?)

For more homage to Bond in his many incarnations, check The Bond Hotline as we celebrate our favorite secret agent. 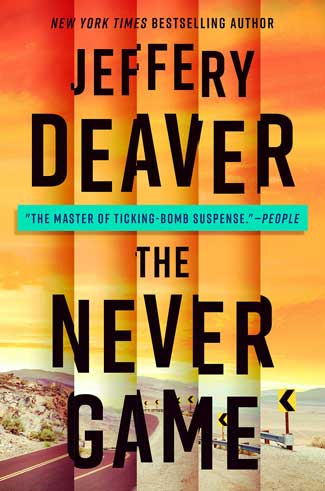 The Never Game is the first a new series from acclaimed thriller writer Jeffery Deaver, following the adventures of expert tracker Colter Shaw. Colter Shaw was named after the mountain man John Colter of the Lewis and Clark Expedition. He was named so because his father was a student of the Old West. It is…