When I was the crime reporter at the Columbus Dispatch, I was covering the story of a gang member who had been shot and killed. As I was interviewing a detective in the homicide squad about the case, I asked him if they had any suspects. He said, “We’re looking at a few people, but we’re not ready to call anyone a suspect.” A moment later he asked, “Can we go off the record?”

“We’re pretty sure we know who capped him. But, word on the street is he wants to pick off a few more members of the gang, so we’re going to give him a little time before we pick him up.”

In other words, wouldn’t our fair city be a nicer place to live with a few less gang members? It was as if the suspect was doing the community a service by clipping the rival gang members.

Had the victim been the homecoming queen or a father of three trying to make a few extra dollars delivering pizzas, the public would have been outraged, and there would have been no hesitation in getting the suspect behind bars.

But, all lives are not valued the same. The cops know it; reporters know it. Nobody in their right mind would admit that, but it’s no less true.

When a street hood gets killed, it often rates a four-inch story, buried in the local section. Sorry for your luck, junior, but you were messing with the wrong people. However, when a three-year-old gets killed in a drive-by shooting, it will rate page one, above the fold. And, which murder do you think the police will work harder to solve?

During my time at the Dispatch, I covered more than 1,000 deaths—murders, suicides, traffic fatalities, plane crashes, drownings, electrocutions, construction accidents, and any of the other various and sundry ways people found to leave this earth. If an article had my byline on it, you didn’t want your name anywhere in it because you were most likely either dead or in jail.

Over time, you begin to understand the ebb and flow of the homicide squad. Of course, they want to solve every homicide, but it was always evident to me which ones were getting the full-court press. Your minister might tell you that all lives are sacred, but your minister isn’t working the graveyard shift in homicide, and he or she isn’t trying to sell newspapers.

You can see these clear differences in my writing in the three suspense books where a corpse plays a prominent role. The victim in this book was Petey Sanchez, which I described as a troubled human being, a stewpot of mental, emotional, and psychological problems manifested in the body of a wild-eyed seventeen-year-old. Every mother in Crystalton feared for the safety of their children when Petey was around.

Thus, when his body was found on Chestnut Ridge with his skull caved in, most people were secretly relieved that the threat was gone. They were not going to jump up and down and celebrate the death of a teenager, but their concern was for their own children. While no one mourned Petey, they felt sorry for his mother, who had spent years answering for the actions of her troubled son. Beyond that, parents feared that his death may have been the result of a random attack and a killer might be stalking their town. Otherwise, it was adios, Petey.

Amanda Baron was a young, beautiful, and loving mother when she disappeared after a boating accident on the Ohio River. An entire town mourned her loss. Years later, people speculated about her disappearance. Had she been killed? Had she run away to escape an abusive marriage? The papers covered the story for years, tracking down reported sightings. Amanda was a sympathetic character, and people wanted a happy ending.

Conversely, years later, when her vindictive husband falls victim to a heart attack, the narrator states: Even my own mother, as charitable and forgiving a person as I've ever known, said, “Well, the son of a bitch is God's problem now.” In my most recent novel, the murder victim is town ne’er-do-well Rayce Daubner. Let’s be clear: not one person cared that Rayce Daubner was dead. In fact, most people were glad he was gone. However, the murder is central to the book as it creates problems for all who knew him, but not because anyone is particularly interested in solving the case.

I once heard another mystery writer say the most important person in any murder-mystery book is the victim.

I try to write stories about the human condition—right or wrong. In most cases, the corpse is simply the vehicle that helps move the narrative. As I have said many times about my books, they are not as much whodunits as they are we-know-whodunit, now-what-do-we-do-about-its.

I have always found the ramifications of a death on the living to be more interesting than trying to solve the mystery. This is true whether the victim was someone we mourn, or someone we’re glad is gone.

Very few issues in our world are black or white. They are usually some degree of gray, and that is where most of us live and work. We know that death is supposed to be black and white. You mourn the dead. But, we also know that isn’t reality. We often drift from the black or the white into the gray.

Thus, that is where I attempt to create my stories.

Robin Yocum is the author of the 2017 Edgar Award-nominated A Brilliant Death. He is also the author of the critically acclaimed novels Favorite Sons and The Essay as well as Dead Before Deadline… and Other Tales from the Police Beat and Insured for Murder (with Catherine Candisky). The president of Yocum Communications, a public relations and marketing firm in Westerville, Ohio, Yocum is well known for his work as a crime and investigative reporter with the Columbus Dispatch from 1980-1991. He was the recipient of more than thirty local, state, and national journalism awards in categories ranging from investigative reporting to feature writing.

A Welcome Murder by Robin Yocum is set in the gritty Rust Belt town of Steubenville, Ohio, told through the perspectives of five different, deeply memorable characters. Steubenville’s (Ohio) population has been declining since it peaked in 1940. According to Wikipedia, a 2010 census shows the number of residents has decreased faster than any other urban… A Brilliant Death by Robin Yocum is part coming-of-age story, part cold-case murder mystery set in a small town in Ohio. It is nominated for an Edgar Award for Best Paperback Original. When Travis Baron was just five months old, his mother disappeared. She was last seen jumping from a pleasure boat into the Ohio… 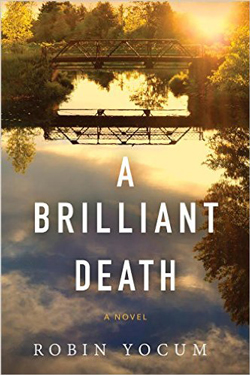 A Brilliant Death by Robin Yocum is coming-of-age mystery where young Travis Baron searches for answers about his mother's mysterious disappearance so many years ago (Available April 5, 2016).  Amanda Baron died in a boating accident on the Ohio River in 1953. Or, did she? While it was generally accepted that she had died when…