June 16, 2021
In the sixth novel in Glen Erik Hamilton’s pulse-pounding thriller series, a new security job turns into a setup, and expert thief Van Shaw finds himself the prey in a cross-country pursuit. Read an excerpt below! 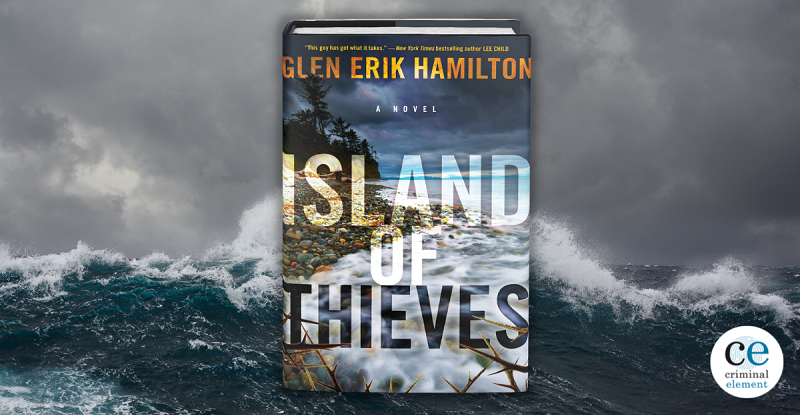 Van Shaw crouched in the shadows, as natural a home to him as the warm Gulf waters to a tiger shark. He watched as the guard with the charcoal gray uniform and company-issued Smith & Wesson completed his circuit of the dim warehouse. The guard’s eyes passed over the upper level of the hangarlike building and Shaw’s hiding place without pause. In his black clothes and balaclava, Shaw was next door to invisible. His relaxed breathing made no sound through the fabric of the mask.

The guard continued his patrol down Row G. One of a dozen rows of industrial-capacity cargo shelves stacked four levels high. The top shelves were forty feet above the smooth concrete floor, the same height as the catwalk where Shaw waited outside the warehouse’s small offices.

The offices were empty now. So were most of the shelves and the steel cages just below the catwalk, where especially valuable or confidential goods would have been stored when the building was a working bonded warehouse. The guard’s patrol was perfunctory. Few goods meant little heed. Shaw heard the door click as the guard left.

He waited. He had watched the shipping yard for two nights and a day from a variety of vantage points. The guards on the midnight-to-eight shift made overlapping circuits once every ninety minutes. When he was confident that both men would be headed away from this end of the yard, he stole down the flights of metal steps to the main floor.

As quiet as Shaw’s footfall was, it still seemed to carry in the cavernous space. He could hear the rasp of each strap of his rucksack against his shoulders as he moved.

The cage he wanted was at the far end. Shaw didn’t approach it. Not yet. He’d spotted the cameras from the catwalk, each glossy black bubble running off the main power.

Shaw could have disabled the camera watching the cage, but he had a more elegant solution in mind. He skirted the wall of the warehouse to where he could risk a dash to the first monolith of empty cargo shelves. He jumped to catch the edge of the first level, ten feet above the floor, and pulled himself up. The shelf was formed of solid metal slats. Shaw stepped lightly down the row, until he came up behind the camera.

He was familiar with the brand and had the necessary gear to grease it in his ruck. It took three minutes for him to tap into the camera’s circuit and copy the still image of the empty floor to a customized smartphone. He bypassed the feed so that the image would be the only thing seen on the monitor screens at the guard’s office. When he was done, he lowered himself to the floor and walked without hurry to the cage.

It was a solid piece of construction. A ten-by-ten enclosure of cut-resistant wire in a tight mesh. Each wall bolted into the concrete floor. Its interior covered with black plastic sheeting to shield the cage’s contents from view. A big RR Brink mechanical lock secured the rolling door.

The Brink was serious hardware, but he could defeat it. His concern was for what might happen once he swung the door open.

In one compartment of his ruck was a glass spray bottle. He put an extra set of leather gauntlets over his nitrile gloves and turned his face away as he sprayed a thick layer of the liquid in the bottle through the metal mesh onto the plastic screen that hid the cage’s interior.

The corrosive worked quickly. Within two minutes the plastic had softened enough for Shaw to cut a hole by working the blade of a jackknife through the mesh. Careful not to inhale the last of the acidic fumes, he leaned close and shone his flashlight into the dark space beyond.

A white pedestal stood in the center of the floor. And on the pedestal, the item Shaw had come for.

The cage’s alarm sensor was right out in the open, like a dare. Suspended at the far corner of the ceiling. Passive infrared to measure changes in temperature. An off-the-shelf security measure any business might use.

Shaw had expected something . . . more unusual.

This is a weird score, he thought, and not for the first time.

A fast break? He could open the Brink lock, rush inside, and be out of the building long before the guards responded in any effective manner.

No, he decided. It was an avoidable risk, putting himself in a position where he had no alternative but to escape at a run. Plus, smash-and-grabs had no style. Shaw wanted to beat the system, not just bulldoze his way through it.

Shaw’s grandfather, the original Donovan Shaw, would have scoffed. The iron-willed bastard had trained his daughter’s boy to be entirely unprecious about their profession. Getting away clean was all that mattered. Most of the time, Shaw still followed the old thief’s precepts.

But this job was different. Special. The papers in the inside pocket of Shaw’s fleece vest, paper-clipped and folded in precise thirds as if still in the original envelope, were enough to verify that.

He climbed up on top of the cage’s roof and got to work. Cordless power shears served to slice through the wire mesh and the plastic underneath as well. The shears made an unholy whine in the open warehouse, but within thirty seconds the last echo had vanished.

Shaw removed a mottled sheet of flexible acrylic from his ruck and eased it down through the slit he’d cut in the roof, covering the IR sensor. The sensor’s lens was designed to break the protected area into sections, to allow the alarm to detect changes as a heat source moved from one section to another. Shaw’s acrylic sheet muddied the received signal, like smearing oil on a camera lens.

He jumped down to the floor. His lockpicks were tucked into a leather sheath around his wrist for quick access. He made the Brink lock confess its secrets in less time than it would have taken to cut a spare key.

Shaw opened the door to shine his flashlight on the object occupying the pedestal.

A figure carved in black stone. An ape, or how someone in ancient times might have imagined an ape if they’d never seen one for themselves. Maybe a baboon, given the figure’s squarish snout.

Whatever it was, it was happy. An erect phallus protruded two inches from between its squatting haunches.

Somebody has a sense of humor, Shaw thought.

Before he left, Shaw set a business card on the pedestal. The card wasn’t his. None of the professions in his life, not thief or soldier or whatever he was now, had required such accessories. The slanted orange letter D at the center of the pristine white card looked almost fluorescent in the gloom.

The card might not have his name and number, but the owner of the stone primate would be calling him soon enough. Shaw had no doubt of that.

About Island of Thieves by Glen Erik Hamilton:

Van Shaw is hired to evaluate the safeguards for the art collection of eccentric business magnate Sebastien Rohner. Then Rohner reveals to Van the real reason he’s been recruited: to prevent another professional burglar from stealing the art. Rohner wants to set a thief to catch a thief.

While questioning the bizarre nature of the job, Van accepts the lucrative offer and arrives at the island estate during an international summit that Rohner is hosting. Shortly after beginning his surveillance of Rohner’s highly secure gallery wing, Van stumbles across the murdered body of one of the honored guests along the rocky shore. Wary of Rohner’s true intentions, Van knows the homicide detectives on the case—and perhaps Rohner as well—think he’s the prime suspect and will turn his life upside down in their search for proof.

Van begins to hunt for the killer himself, but scrutiny only digs his hole deeper, as one of Rohner’s own executives is then killed and the Seattle police find concrete evidence placing Van at the scene. With no other options, he goes on the run, alone and unaided. He’s hunted by the cops, the enraged Rohner, and by a pair of psychopathic hitmen who chase Van from one coast to the next. To clear his name, Van Shaw will have to uncover the hidden motive of corporate espionage at a global level, even with a band of killers on his tail, determined to add Van to their growing list of victims.