Interview with John Glatt, Author of The Family Next Door 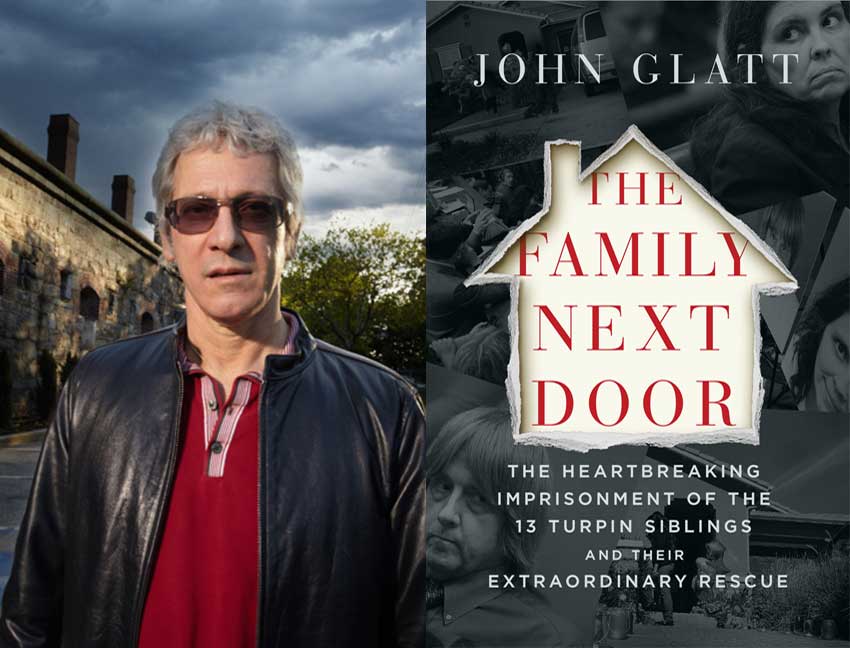 Join us for a conversation with John Glatt, the New York Times bestselling true-crime author whose newest book, The Family Next Door, tells the devastating story of the Turpins: a seemingly normal family whose dark secrets would shock and captivate the world.

When the news broke about the Turpin case, how much time passed before you started compiling research and writing the book? Did you know right away you wanted to write about it?

When I saw the first coverage on the dramatic escape and the Turpin family, I immediately knew I wanted to write a book on the case. I have already written books on Josef Fritzl, who kept his children imprisoned in the basement of his Austrian home, Jaycee Dugard, who was kidnapped by Phillip and Nancy Garrido at the age of eleven and held hostage for nine years, and Cleveland abductor Ariel Castro, who held Amanda Berry, Gina DeJesus and Michelle Knight captive for many years.

David and Louise Turpin was a natural progression for me with their inhuman and unprecedented torturous methods of imprisoning their thirteen children.

Did you wrestle with including any facts in the book out of respect for the Turpin children?

I naturally kept the Turpin children in my mind while I was writing and tried to handle their tragic story with the utmost sensitivity, as I didn’t want to hurt them any further. But quite honestly, there was nothing that I felt I had to omit in that regard.

Was there anything in this case that shocked and disturbed you, perhaps even giving you nightmares, although you’ve investigated some of the worst true crimes in recent history?

Oh yes, there were plenty of highly disturbing things in this case, but after writing 26 books, I have learned to compartmentalize things. Just the horrible torture that many of the Turpin siblings endured from the very beginning of their lives was shocking. None of the other true crimes I have explored over the last twenty years have come anywhere close to what they had to suffer.

Did you get a chance to talk to anyone directly in the Turpin family, whether the children, aunts, parents, etc? If no, how hard is it to write a true crime book that reads like a novel by just reading police cases, interviews, etc?

None of the Turpin siblings have ever been interviewed and probably never will be. I did approach Louise’s siblings and David’s parents, but unfortunately they did not want to do interviews. Nevertheless, I did interview a treasure trove of former neighbors, as well as many pupils in Jennifer Turpin’s elementary class in Texas, who had valuable new information about the family.

This past April, a judge convicted David and Louise Turpin each to 25 years in prison. Do you personally think this prison sentence is fair knowing as much as you do about the case? Why or why not?

I think the 25-years to life sentence is fair considering it probably is a life sentence for at least David, who is now 57-years-old. It is also likely that Louise will never see the light of day either as she has just turned 50. The sentences were plea-bargained in return for not putting the children through a lengthy trial.

If you could say one sentence to the Turpin children, what would it be?

I think you are all so brave and amazing for overcoming everything you had to suffer and coming out with such a positive zest for life and showing no bitterness whatsoever.

Describe The Family Next Door in 10 words or less!

The never before told story of the thirteen Turpin Siblings.

As a prolific true crime writer with over 25 books under your belt, what are some other cases you’d like to investigate and write about in the future?

With shows like Homicide Hunter and podcasts like Serial, it seems like everyone’s interest in true crimes is at an all-time high. What do you think makes true crime narratives so addictive?

I think true crimes allow the reader or listener to safely explore an unpredictably savage world from the safety of their cozy armchairs.

Suburra: Blood on Rome and Bosch.