In Inferno, we once again have Dr. Robert Langdon using obscure knowledge about literature, history, and art to solve puzzles. And with this go around, we focus on the works of Dante Alighieri, who wrote the Divine Comedy—the highlight of which is Inferno.

Langdon is correct about the modern conceptualization of Hell. Dante literally wrote the book on it. Part of the reason it was so popular was because he wrote it in Italian instead of in the more scholarly Latin. This made it accessible to the common people. Literacy in the Middle Ages is hard to come by, but generally referred to someone’s ability to read and speak Latin fluently. By being in the vulgar Italian (well, Tuscan), Dante’s writing allowed access to a work on a religious subject that didn’t need to be interpreted by a priest—definitely a first for the time.

Dante’s work gave access to understanding Hell, but Hell itself was a fairly new concept, mythologically speaking. Translations to the word Hell are from the Hebrew word sheol, which is a different concept. To modern eyes, Hell is as Dante described it, a place of punishment for sinning, but that’s not the Old Testament meaning of the word.

Rather, sheol was simply an underworld, a place where the spirits of all the dead went regardless of their actions. It was neither good nor evil. It was simply the place for the dead spirits to exist after life. When the Old Testament was translated into Greek (roughly 200 BC), they translated sheol as Hades, thus lending an evil moniker to the place. The concept also encompasses the totality of the Greek underworld, divided into Tartarus and the Elysian Fields, both of which are under the province of the Greek god Hades.

However, even before this, there were rumblings of cosmological changes in Hebrew thinking. The subdivision of sheol was on their minds to differentiate those who sinned from those who didn’t. But for my money, the door truly opened with Elijah. Instead of dying like Adam, Abraham, Jacob, and Moses, “Elijah ascended in a whirlwind into heaven” (2 Kings 2:11). This is another absolute first. No human being had ever been seen as good enough to go into heaven to be with God. Elijah’s ascension opened the way for people to believe that if they made the right choices, they too would be taken up to be with God.

By the time the New Testament came around, this cosmological shift was in full swing. The concept of Hell had been fleshed out as an “eternal fire prepared for the devil and his angels” (Matt 25:41). John’s Revelation further refines it as a lake of fire (Rev 19:20). These are the ideas that Medieval Christians used as inspiration for Hell, which are very far removed from its origins as sheol.

Dante takes us from a simple lake of fire to a completely organized pit, with each layer (ring) housing a different kind of sin. The deeper Dante descends in his world tour, the more severe the sin, culminating in a triple-headed Lucifer at the very bottom—represented on the outside of Langdon’s Faraday pointer.

Dante’s writing was so vivid that Botticelli, famous for his portraits, depicted scenes from Dante’s Inferno and sketched a map all the way to the bottom, also depicted in book and film. Dante’s version of hell would not be challenged until John Milton’s epic poem “Paradise Lost,” which gives us a version of the fiery lake, but with nowhere near the detail that Dante does. Dante’s Hell has diverse geographic features, such as rivers, forests, and lakes. The river from Langdon’s vision is the Phlegethon, a river of fiery, boiling blood—which Dante cribbed from the Greeks. This Hell even has the infernal city of Dis, which takes up rings six through nine.

Dante’s Hell is detailed, imaginative, and thus tangible, which persists in people’s memories even to the present day. But for all that, we have to ask the question that Langdon does in the story, “Why Dante?” Why did Zobrist focus so much on Dante?

We’re given the answer with Zobrist’s talk of embracing suffering and pain. For all of Dante’s many accomplishments for his Inferno, the true game-changer was that of passing completely through. By embracing the suffering and moving deeper into Hell, by risking a more severe punishment, its inhabitants had the opportunity to escape its clutches. This is the path that Zobrist wanted humanity to take, to make the hard choices instead of doing nothing.

Zobrist is incorrect, though, on the punishment for those who do nothing. It is not the worst in Dante’s Hell. In fact, the closest that Dante’s Inferno comes to assigning such a punishment would be the sullen, those who are passively wrathful. Zobrist and Sienna, however, at the very least would end up in circle seven for making war upon their neighbors—if they flat out didn’t end up in circle nine for betraying humanity.

Dante’s work forever altered the conception of the underworld, and Brown’s book and the recent film do justice to bringing the wonders of Dante’s world to people. However, it’s also important to understand that for all of its 700+ years of shaping our understanding, it’s still a modern work, especially compared to the older mythologies such as Hades and sheol. Just some food for thought … but don’t overindulge (or you’ll end up in circle three).

See also: Demons Within: Exploring the Mythology of Angels & Demons

Every Wednesday, we here at Criminal Element will put together a list of Staff Picks of the books that published the day before—sharing the ones that we are looking forward to reading the most! The first in a new series from Ellie Alexander combines with M. C. Beaton's 28th Agatha Raisin Mystery and Dan Brown's… 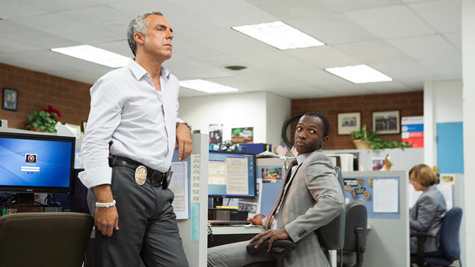 Bosch has transformed television mystery. For the first time, viewers can experience the closest approximation to a mystery novel as is possible on screen. The pacing, development of the characters, complexity of the plot, simultaneous themes, and detailed touches make Bosch the template for 21st-century mystery television.  One of the shortcomings of police procedural shows…