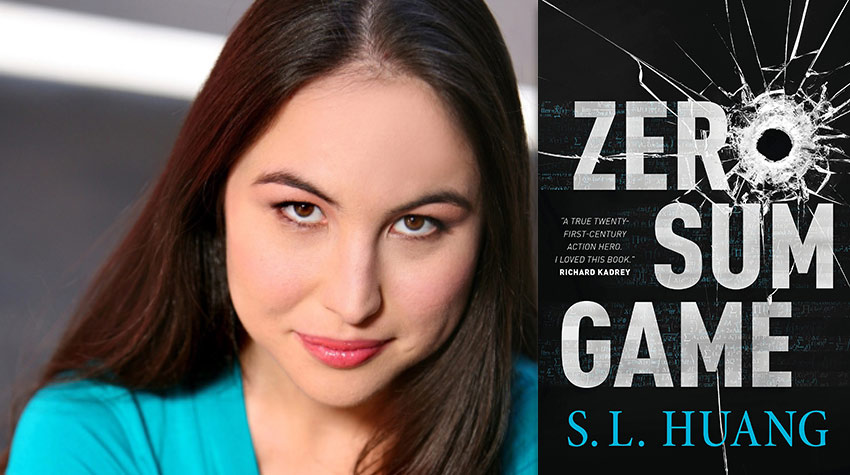 I grew up in New Jersey, which I like to think gives me street cred—until I remember I was raised in the suburbs a few blocks away from cow pastures, my parents both had office jobs, and I went to a well-funded public high school where we were best known for our math team.

So after college, I naturally moved out to LA to become a Hollywood stuntwoman and weapons expert.

And looking back, I couldn’t have written the Cas Russell books otherwise. Not just because the books have a lot of fights and guns in them—though, they do!—but because I don’t think I could have written a book that straddles into a gritty criminal underworld without, well, having worked in film.

Hollywood has its corporate side, sure, and the big studio pictures tend to be as shiny and well-run as you’d expect. But there’s also the vast world of indie and low-budget films—and there, work can feel a lot more like a Wild West where people are constantly coloring outside the lines of what is legal or normal.

When I would tell my friends in corporate jobs stories about some of my film work, they would frequently respond with: “That can’t be normal! Things can’t work that way!”

Well, they might be right, because here are some experiences I’ve had in film that helped me write a tough-as-nails mercenary who doesn’t work the “normal” way either!

I met a lot of interesting characters working in film, but the most memorable shoot by far was the script that had a lot of gangbangers fighting each other. Instead of hiring actors like usual, they hired actual gangbangers to play the gangbangers.

I was responsible for the guns on that one, which meant supervising all the blank gunfire and making sure all of my weapons were safe and well-handled. Fortunately, they all respected my authority, but I remember this conversation vividly:

Gangbanger: “Hey, does doing this stuff leave GSR [gunshot residue] on your hands?”

Gangbanger: “So, theoretically, if one of us were to cap someone on the way home from this shoot, that would be a good excuse for the GSR huh?”

That set had a lot of untoward things happen on it—the best part was it was a large and fully-permitted shoot, which meant they were required to have a whole mess of cops there supervising. The police watched everything go down and didn’t say a word!

Playing hardball to get paid.

On shiny studio pictures, I could always trust I’d get a check in the mail. But on a lot of indie projects, demanding cash up front was the only way to go because it is incredibly common for these small production companies to disappear into the night and stiff literally everyone on the crew. The cash-upfront policy was always made very clear to them beforehand, but sometimes I’d arrive and they’d beg and plead and yell about how they didn’t know and it wasn’t fair and couldn’t I just trust them. My response was to tell them very politely that when they had the cash, I’d start working.

Invariably, I’d see someone else from the crew on another shoot a few weeks or months later, and we’d have a conversation that went like this:

Them: “That was smart. Um. None of us got paid. They owe me for five weeks still…”

Payment issues in indie movies are so frequent that people would do all sorts of things to get their paychecks, from stealing things off the set and refusing to return them until they saw what they were rightfully due to threatening to destroy pieces of the finished footage. I never had to resort to any of that, but I also didn’t work on one project where I didn’t get paid what I was owed—which is very, very unusual.

Even when I was working for sane and competent production companies, sometimes the script dictated that we would be in … not so sane places. Here are just a few of the locations I’ve shot in:

So when it came to building the criminal underground I used in Zero Sum Game, I had a lot to draw on. In fact, having lived that edgy and line-blurring place already, I was able to extrapolate just a small skip and a jump from my own experiences—and voila, I could build the gritty, urban, streetwise and not-so-legal world of the Cas Russell universe!

Take a visual tour of Zero Sum Game with GIFnotes!

S. L. Huang has a math degree from MIT and is a weapons expert and professional stuntwoman who has worked in Hollywood on Battlestar Galactica and a number of other productions. Her novels include the Cas Russell series (formerly known as Russel's Attic). Her short fiction has appeared in Strange Horizons, Nature, Daily Science Fiction, and The Best American Science Fiction & Fantasy 2016.