David Bruns remembers meeting Tom Clancy just after the publication of The Hunt for Red October—an encounter that would forever change his life. Plus, comment below for a chance to win David's new military thriller Rules of Engagement!

In the summer of 1984, I entered the U.S. Naval Academy as a plebe, or fourth-class midshipman. In October of that same year, Tom Clancy published his first novel, The Hunt for Red October. A few months later, our paths crossed.

The meeting was the opposite of memorable. In fact, it was purely mercenary on my part. My English instructor promised extra credit to anyone who attended a book talk by an unknown Naval Institute Press fiction author. (As midshipmen, we knew the NIP as the organization that published Proceedings. This was the first time the Naval Institute Press had published fiction.) I didn’t really need the extra credit, but why pass up the chance to bank some points?

In his life before The Hunt for Red October became uber-popular, Clancy was an insurance salesman and… well, that evening he looked exactly like an insurance salesman. Ill-fitting tweed jacket over a standard white shirt and dark tie, thick glasses—you get the picture.

His talk was equally uninspiring. I remember him fumbling for words in an arena-style lecture hall filled with a few dozen midshipman drowsing after a dinner in King Hall. Most of them, like me, probably attending for the extra credit. He told us he had never served in the Navy, but he had written a novel about a defecting Russian submarine captain and the US sub trying to track down the wayward Russkie. I remember thinking at the time that he was an unlikely success story. His technothriller—an unfamiliar term at the time—had been rejected by all the major publishing houses until it was picked up by the Naval Institute Press.

I was young. I was skeptical—possibly even scornful—of this civilian writing fiction about my future profession.

I was also wrong. I should have listened more closely to Mr. Clancy.

It’s tough to put into words just how The Hunt for Red October took the U.S. Navy—especially the submarine force—by storm. The mid-1980s was the height of the Cold War with the former Soviet Union, and Clancy’s tale of two submarines fed into the mystique of the high-stakes, undersea, cat-and-mouse game between superpowers.

During summer breaks, midshipmen served in the U.S. Navy Fleet as part of our professional training. I volunteered for a “cruise” on a submarine. (Most first-years were sent to surface ships, but volunteers were taken for submarine duty.) I spent eight weeks at sea on the USS Albuquerque, a Los Angeles-class fast attack submarine out of New London, Connecticut. Today, a photo of that submarine, signed by the captain, hangs on my office wall.

On that extended summer operation, Red October made the rounds through the crew. I remember discussing the book during a slow watch with the grizzled Chief of the Boat. “Couldn’t read it,” he said to me. “Too much like being on watch.” And he was right—it was that realistic.

But me? I read it twice during my first stint at sea. I was hooked.

But the story doesn’t end there. I graduated from the Academy with a commission as an ensign and entered the nuclear power training pipeline. A few years later, I was back in New London, this time for Submarine School, the final stop for officers before they went to the Fleet. The movie adaptation of The Hunt for Red October was released that spring and the base bought out an afternoon showing for the Sub School classes. I can still picture it: an entire movie theater packed shoulder to shoulder with khaki-clad twenty-somethings and their instructors, all cheering for the good guys (which also happened to be us) during the final action scene with the submarine launching out of the water in an emergency blow operation.

By then, I already had orders to report to the USS Baton Rouge, a Los Angeles-class fast attack submarine just like the one in the movie and could not have been happier. My dream was coming true. It felt right that I was seeing my old friend Red October on the eve of becoming a real submariner.

In many ways, Clancy’s writing shaped a generation. In his microcosm of the battle of wits between the Red October and the Dallas, he captured the essence of the increasingly tense Cold War, putting the conflict in stark terms. The Russians and their system of government were evil, the United States military were the heroes. The Soviets were ten feet tall with more ships, more troops and more bombs than us. We were the underdogs and the only way to beat them was to be faster, smarter, and more agile than our enemy. Clancy’s stories drove that message home to a public looking for a way to process that tense period in our nation’s history.

In the years since that meeting with Mr. Clancy, I’ve seen countless clips of him speaking with great eloquence. But my mind always drifts back to that first meeting, when he fumbled for words and I let youthful arrogance cloud my thinking.

The Hunt for Red October had a profound influence on my life. After graduation, I went on to serve in the nuclear submarine force. In the mid-90s, after the Cold War was proclaimed dead, I left the Navy to pursue a career in high-tech. After a few decades, I changed careers again. Today, I write technothrillers—just like Tom Clancy.

Such is the power of story.

David Bruns and his writing partner, J.R. Olson, form the Two Navy Guys writing team. Together, they pen national security thrillers about the men and women who keep our country safe from the risks of the 21st century. Their new novel, Rules of Engagement, about North Korean cyberwarfare, is on-sale June 25th. 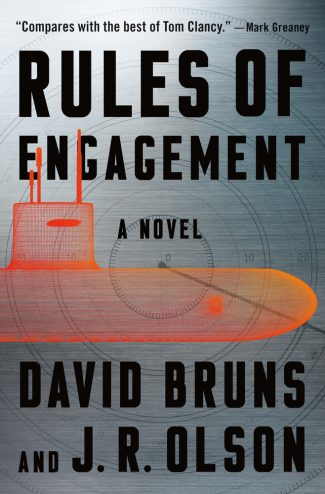 About Rules of Engagement:

A terrorist breach of the computer systems of the three most powerful navies is about to set them on a collision course for World War III.

Rafiq Roshed is one of the most wanted men in the world. A terrorist with a virulent grudge against the West, he’s disappeared into North Korea where he quietly launches cyber sneak attacks in service of Kim Jong-un. But now he’s about to unleash his virtual masterpiece—a computer virus that, once inserted into the command systems of a military, not only takes over, but also learns the art of war. First penetrating the Chinese, he has their war machine launch a series of attacks on the U.S. Pacific forces.

Don Riley, head of U.S. Cyber Command, discovers that not only have the Chinese lost control of their military, but the same virus has infected the American network. It’s only a matter of time before the U.S. loses control of its own military. His secret weapon in this war is a trio of supremely talented midshipmen from the U.S. Naval Academy, who uncover the infiltration, and are working to track down the elusive terrorist.

But time is running out. China and Japan have lost control of their military and the U.S. is in danger of doing the same. The weapons are hot and the result is an ever-larger real-world conflict where casualties continue to mount. The only remaining hope is to find and stop the attack at its source—before time runs out.

Comment below for a chance to win a copy of Rules of Engagement by David Bruns & J. R. Olson!

Rules of Engagement Comment Sweepstakes: NO PURCHASE NECESSARY TO ENTER OR WIN.  A purchase does not improve your chances of winning.  Sweepstakes open to legal residents of 50 United States, D.C., and Canada (excluding Quebec), who are 18 years or older as of the date of entry.  To enter, complete the “Post a Comment” entry at http://www.criminalelement.com/how-tom-clancy-changed-my-life/ beginning at 12:00 p.m. Eastern Time (ET) June 18, 2019. Sweepstakes ends at 2:29 p.m. ET July 2, 2019. Void outside the United States and Canada and where prohibited by law. Please see full details and official rules here. Sponsor: Macmillan, 120 Broadway, New York, NY 10271.