Well, as a writer, that is.

Like the majority of humans, I was raised in one of the Abrahamic religions. (You know: Christianity, Islam, Judaism.) Their numbers are nudging the four billion mark these days. Add another billion Hindus, plus the uncounted belief systems incorporating Intrusive Cosmic Entities, and you’ve covered a hefty percentage of the human race.

Little wonder the entities are so popular—through history, they’ve sparked countless tall tales. Go back to the dawn of human history and you’ll find the great flood in the Gilgamesh saga was caused by Intrusive Cosmic Entities. A little later, the Abrahamic clans were writing about a similar (or maybe the same) flood caused by their cranky Intrusive Cosmic Entity, Yahweh. Look at the fun the Greeks had with all theirs, and how the Romans continued the tradition.

As a child, and even a preteen, I found Christian dualism comforting. I mean, who couldn’t get down with the symmetry of a benign, fatherly Intrusive Cosmic Entity above and a mean, evil entity waiting below? The expression, “God’s in His heaven, all’s right with the world,” was sort of taken for granted. We might have nuclear warheads locked and loaded down here, but everything was A-OK in the cosmos.

Then, H. P. Lovecraft stepped into my world—or should I say stomped on my world—with his materialistic Weltanschauung. Without even deigning to dismiss the Abrahamic myths, he described a universe that was indifferent, at best, and—more often than not—casually inimical. I didn’t buy into his catalog of interdimensional entities with the tongue-twisting names, but his coldly mechanistic view of the universe…that made a weird sort of sense.

And, that was when I started to—as the Christians say—backslide. I’m now considered a fallen-away Catholic. I prefer the term “recovering Catholic,” because you never fully escape the influence of a Catholic school—or a madrasa.

When I started writing, I turned out hard SF—my first sales were to John W. Campbell for Analog. But all the while, I was secretly yearning to write about Intrusive Cosmic Entities. (If you paid close attention to HPL, you realized he wasn’t writing dark fantasy, he was writing SF.) Finally, I took the plunge with The Keep and never looked back.

My Secret History of the World now encompasses 29 novels and 13 shorter works, including the Adversary Cycle, the entire Repairman Jack run, and sundry other tales, all dealing with, to varying degrees, the idea of our civilization, our world, our reality as a marble in a game between Intrusive Cosmic Entities. They don’t have names. When you’re that big, you don’t need a name. (Besides, if we humans know something’s name, we tend to pigeonhole it and make it seem safer; the next step is contempt, e.g.: Cthulhu plush slippers.)

When I put Repairman Jack out to pasture after Nightworld, I intended to take a break away from the Secret History and its Intrusive Cosmic Entities. Frankly, I worried that I’d become too dependent on them. I was through with all that. I’d had this mystery/adventure/thriller Dutch-ovening in my head for years and was anxious to get to it. So, I started Panacea and immediately began running into a wall. You see, a panacea can’t exist. It’s impossible. It breaks all the rules of biology and physics. What can cure a MRSA infection can’t cure radiation poisoning; what can cure MS can’t cure coronary artery disease. I’d stopped believing in my own maguffin.

And then, out of the blue (well, seemingly), this character starts spouting a skewed worldview about “intellects, vast, cool, and unsympathetic” (yes, he took it from Wells and knows it) toying around with mankind. If a panacea truly exists, it’s these intellects playing games, trying to shake us up. Less Lovecraftian and more Fortean, true, but after all my protestations, here I was back with Intrusive Cosmic Entities. (No, I will not quote Michael Corleone.)

I gave up and went with it. And, you know what? Once I’d hurdled that stumbling block, the novel gushed out. The Intrusive Cosmic Entities aren’t acknowledged as real in Panacea, merely referred to by a fellow who’s considered a bit eccentric in his thinking. They play no direct part in the story, but they played a huge part in making it work for its author.

I’ve come to accept that Intrusive Cosmic Entities are integral to my Goldilocks Zone. So I don’t fight them. We have a détente. We even have tea now and again.

F. Paul Wilson is the New York Times bestselling author of horror, adventure, medical thrillers, science fiction, and virtually everything in between. His books include the Repairman Jack novels—including Ground Zero, The Tomb, and Fatal Error—the Adversary cycle—including The Keep—and a young adult series featuring the teenage Jack. Wilson has won the Prometheus Award, the Bram Stoker Award, the Inkpot Award from the San Diego ComiCon, and the Lifetime Achievement Award of the Horror Writers of America, among other honors. He lives in Wall, New Jersey. To learn more about F. Paul Wilson and his work, visit: www.repairmanjack.com 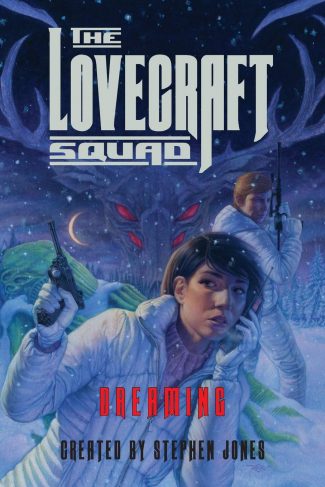 The Lovecraft Squad: Dreaming, edited by Stephen Jones, is the third volume in the new interconnected trilogy that reveals the origins of “The Lovecraft Squad”—a super-secret worldwide organization dedicated to battling the eldritch monstrosities given form in H. P. Lovecraft’s fevered imagination. The Lovecraft Squad is a secret branch of the FBI created to hold…