If you’re looking for something different to read and enjoy historicals, Kerry Greenwood’s Phryne (rhymes with briny) Fisher mysteries might suit.  This series, which began with Cocaine Blues (1989), is set in Melbourne, Australia, in the 1920s. (A television series titled Miss Fisher’s Murder Mysteries and starring Essie Davis begins filming next month to air in Australia in 2012.) The novels are slender, but pack in a lot of action and historical detail for their length, and should translate admirably to film.

There are eighteen novels in the series so far.  Aside from enjoying the novels, I love their covers, which are drawn in an Art Deco style.  The details of historical Australia as provided by Greenwood provide endless fascination, from the lives of ethnic minorities in Melbourne to what it was like to visit Australian vacation spots of the time.

The detective is a wealthy young woman who travels from England to Australia to investigate a possible poisoning in 1928.  She and her family had lived in Australia when she was a child, barely scraping by financially.  When older, she goes to France and serves in an ambulance unit during World War One; she is decorated for courage.  The deaths of several young men in the same war enable her father to inherit an English title as well as its associated wealth.  Phryne can thus can approach mysteries from several different social angles.  Phryne’s first case, for example, involves both the cocaine trade among the upper class and a back alley abortion ring that preys on all levels of society.

In one of the novels, Blood and Circuses, she throws off all her wealth and social status to go undercover as a trick rider at a circus, in a plot reminiscent of Dorothy Sayers’ Murder Must Advertise. Despite the sometimes dark content of the crimes, the series is generally lighthearted and captures a great deal of the optimism of the 1920s.  Phryne drives a Hispano-Suiza sportscar very fast, can fly a plane, wears stylish Art Deco clothing, carries a pearl-handled pistol, and takes a series of lovers, most notably the wealthy Lin Chung, even though he is later married to someone else.  (He first appears in Ruddy Gore.)  She’s very much in the Flapper mode, and also a bit of a superhero with her wide range of skills and impeccable social sense. I picture her as looking a bit like silent film star Louise Brooks, with her bobbed black hair.  Rarely is Phryne at a loss, either with people or with crime.  (Perhaps because in Murder in the Dark she’s reading Agatha Christie’s The Murder of Roger Ackroyd?) Phryne’s upbeat outlook and extroverted personality lead to her acquiring a host of loyal sidekicks who enliven the series, beginning with Dorothy ’Dot’ Williams, one of my favorite characters for her pragmatism and budding sense of adventure.  Saved from sexual harassment at her previous position as a housemaid, Dot becomes both Phryne’s lady’s maid and social secretary, but those roles quickly expand to include detecting.  From the very beginning of the series, the duo of Bert and Cec (Albert Johnson and Cecil Yates) provide a different angle on the various mysteries.  Both Bert and Cec are former soldiers who served in World War One—now serving Phryne as both drivers and muscle when needed—and giving us a sympathetic view of working-class Communists, or “red raggers.”   Detective Inspector Jack Robinson serves as Phryne’s police contact.

Over the course of the series, she also adopts a cat, a dog, and two young girls rescued from domestic slavery.  A female doctor, Elizabeth Macmillan, also has a recurring role.  Phryne will savagely defend any of her compatriots if they are threatened, one of her most admirable traits, and one that contributes to the ongoing pleasures of this series. 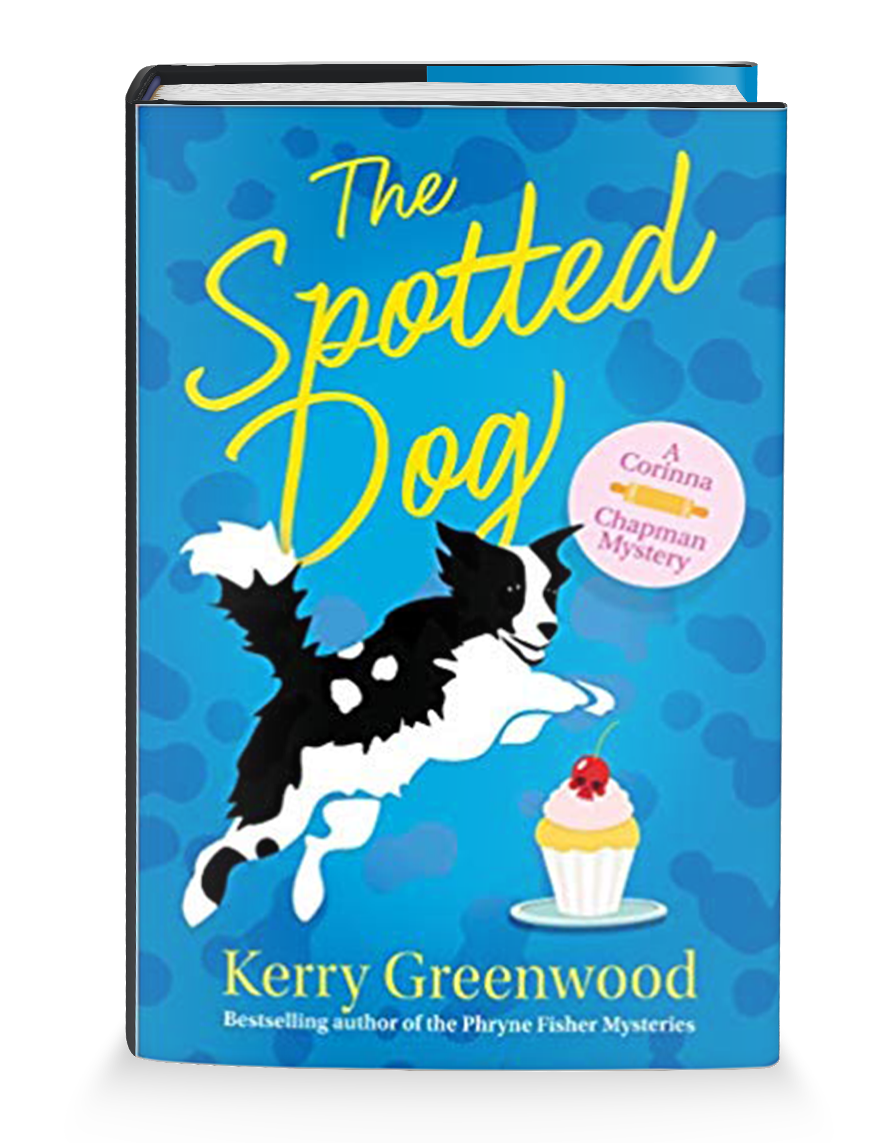 The Spotted Dog by Kerry Greenwood is the seventh book in the Corinna Chapman Mystery series. When a military veteran comes to Corinna’s bakery, Earthly Delights, in search of his missing dog, Corinna and Daniel try to reclaim the missing pup while steering clear of the drug runners who set everything in motion. To enter…