You only live once. Right?

Chances are, unless you believe in reincarnation and are also peculiarly in touch with your past lives on this harsh and often beautiful planet, then your experience will be confined to one existence (never discounting the kindly tips you’ll pick up from friends and strangers).

Perhaps you are a 32-year old male Caucasian pickle magnate who is taste-testing the most perfect fermented vegetables ever to be jarred, and is on the cusp of driving all competitors out of the market? I’d like to hear your story. Equally possibly, you are a 57-year old female African American deep-sea submarine pilot, and are on the verge of retiring to your dream cottage in the West Indies? I’d adore that story too.

No matter who you are or how specific your experience, we all share in the deeply human desire to hear stories both foreign to ourselves in situation, and familiar in emotion.

You really felt that way, as a glamorous jewelry broker in the 1920s, doubting that your lover would stay?the modern real estate magnate thinks. Or, You really felt ostracized and hated when you arrived in America in the 1840s as a Catholic? the recent immigrant thinks. In any case, or every case, sharing anecdotes and feelings is valuable. But what of the people who weren’t glamorous, who weren’t posh or predictable—what of the people who never recorded their musings for posterity?

History is written by the victors, we are famously told. But so much of the joy in historical fiction lies in imagining what it would have been like to be that other person. The losing general, the girl who sat in the corner, the lad whose disability defined him, the criminal whose defense was never heard, the mother whose skin tone prevented her leaving a diary.

The erased, to put it simply.

Several of the main characters in my historical novel Seven for a Secret are members of the New York Committee of Vigilance, an organization formed to combat the horrifying practice of slave catchers kidnapping free people of color and selling them as escaped chattel to Southern plantations. The Vigilance Committee men did meticulously record their thoughts and intentions, but hardly had the channels to trumpet them, and I salute every ounce of courage they expended in trying to keep the black community intact.

Many readers will be familiar with this disgusting form of identity theft from Twelve Years a Slave, an autobiography by Solomon Northup that—incredibly, if we’re honest—was not only published, but survived to become a major motion picture showered with deserved accolades. When I set out to write the second Timothy Wilde novel, however, no inkling of this film had yet reached my ears; I wanted to create a narrative that included people who would have been voiceless at the time apart from brief anecdotes in American Slavery As It Is: Testimony of A Thousand Witnesses by Theodore Dwight Weld, a book that collected stories from people who couldn’t tell their own. 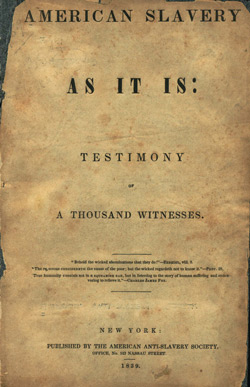 Have I also read the diary of an African American chimney sweep working in the year 1846, for verisimilitude and historical accuracy? No—most were illiterate, and countless died before they reached adulthood. By countless, I mean that the number could not be counted, as they themselves were never counted in the first place. Are there plenty of third-party chronicles regarding what happened to such children? Absolutely. Did I want to share their stories? You bet your antique porcelain buttons I did. Historical fiction, I find, is about filling in gaps that most of us didn’t know existed in the first place (including myself).

Child prostitutes were practically overrunning the metropolis according to George Washington Matsell, the first New York City police commissioner, when he reported on the problem in 1846, using dire—almost pleading—terms. A continuing character of mine is another of these erased people—a little girl forced into sex work who escapes as so few others did, and makes her way as best she can.

I’m proud to say that I did not need to scour the archives in order to find a queer antebellum man living in New York City upon which to model a character. Walt Whitman was never erased—he was visible, penning torrential, tumbling waterfall poetry against a backdrop of love and sweat and dirt.

Meanwhile, other authors of historical fiction are constantly succeeding at the goal I always strive for: making erased humans visible. And a refreshingly massive number of these novels have to do with crime, which tickles my fancy from page one. I don’t need to remind anyone that brilliant writers like Alice Walker and Toni Morrison recreate violent scenarios in works like The Color Purple and Beloved (respectively) that both punch us in the heart and remind us how brutal our history is. Their work is extremely important to our culture, and I applaud their every letter.

They are not alone, however—I cherish crime fiction authors like Louis Bayard, for instance, who, by giving Timothy Cratchit a voice in Mr. Timothy (yes, there’s loads of crime), enables us to see the strong adult who was once characterized as a crippled child by Charles Dickens, a man who himself spoke for abused children in ways no one else could. I adore Lynn Shepherd’s canon, starting with The Solitary House, a tale taking place along the periphery of Bleak House by Charles Dickens that lends a voice to women suffering from mental illness. And I relish The Yiddish Policeman’s Union by Michael Chabon, a book that imparts a voice to an Alaskan colony of Yiddish speakers who didn’t even exist.

The point I’m trying to make here is that empathy is absolutely crucial in this day and age if we want to start treating each other better, and historical crime novels help to empart us with empathy, or they do for me when I read them. There’s nothing better in my book than tarnished heroes and sympathetic villains. In the realm of television (and books, too, in the latter case) take Breaking Bad or Dexter as an example—we’re all rooting for drug dealers and serial killers. Swerving back into print, read J. R. Moeringher’s Sutton, a book that turns a real-life hardened gangster born in the Irish slums in 1901 into an utterly loveable protagonist. Would you like to know more about desperate and estranged Americans? Try The Other Typist by Suzanne Rindell, or The Physick Book of Deliverance Dane by Katherine Howe.

America isn’t a melting pot, not really—it’s a vibrant, fresh salad still being dizzied in the spinner. What humbles me as a historical fiction author and reader is that I’m allowed to imagine what previously-erased people might have thought and felt. I won’t get it right, not 100%—I couldn’t possibly. But if the weavers of historical narratives take the step of talking about these individuals? Maybe then we’ll all become better at seeing the people who surround us, the ones whose voices we may not be hearing clearly, because we didn’t know we were meant to be listening.

Leading image from a series of paintings by artist Carole Brémaud.

Comment below for a chance to win a paperback copy of  Seven for a Secret by Craig by Lyndsay Faye. To enter, make sure you're a registered member of the site and simply leave a comment below.

Seven for a Secret Comment Sweepstakes: NO PURCHASE NECESSARY TO ENTER OR WIN.  A purchase does not improve your chances of winning.  Sweepstakes open to legal residents of 50 United States, D.C., and Canada (excluding Quebec), who are 18 years or older as of the date of entry.  To enter, complete the “Post a Comment” entry at https://www.criminalelement.com/blogs/2014/08/historical-crime-fiction-writing-the-lives-of-the-erased-lyndsay-faye beginning at 12:00 p.m. Eastern Time (ET) August 30, 2014. Sweepstakes ends 11:59 a.m. ET September 6, 2014. Void outside the United States and Canada and where prohibited by law. Please see full details and official rules here. Sponsor: Macmillan, 175 Fifth Ave., New York, NY 10010.

Lyndsay Faye is the international bestselling author of the Edgar-nominated Timothy Wilde series from G. P. Putnam's Sons. She has been translated into 14 languages and is part of the Baker Street Babes podcast. She tweets @LyndsayFaye.