December 4, 2020
Join Jane K. Cleland, author of the Josie Prescott Antique Mystery series as she shares some of the real-life antiques that she includes in Hidden Treasure, the newest installment in the series!

BONUS: Log-in and leave a comment on this post for a chance to win a copy of Hidden Treasure!

As with all the Josie Prescott Antiques Mysteries, Hidden Treasure, the thirteenth entry in the series, uses genuine antiques to tell a fictional story. The questions that surround antiques are fraught with mysteries. Who designed it? Why? What was going on in their world that made this artifact appropriate or desired? Who produced it? Who bought it? Who loves it? Who resents it? Who stole it? Who killed for it? The antiques I write about are real—actual people designed, created, fabricated, manufactured, or crafted these objects, and real people used or cherished them. But the stories I weave around them are inventions—my inventions. Which is to say, I use facts to write fiction.

No surprise, the more intriguing the antiques, the more compelling the mystery, and this time around, I’ve found some doozies. Here are the antiques that lead to murder in Hidden Treasure:

Unless, of course, they’re counterfeits. That’s where Josie comes in.

Writing Hidden Treasure required that I determine the truth about the antiques themselves, relevant historical and current events, and difficult relationships. All three components matter, but as with most of life, it is the relationships that matter most: the misunderstandings, the love that turns to hate; the lust that fades to nothing; the revenge planned because of perceived slights; the greed; and the debilitating fear of reprisal or exposure. Hidden Treasure includes multiple mysteries involving conflicts that chafe and fester and grow until someone is driven to kill. These mysteries are layered onto known elements.

All the Josie Prescott Antiques Mysteries take place in Rocky Point, a charming seaside town on the rugged New Hampshire coast. There’s an ensemble cast, people who have their own lives and joys and dilemmas. You’ll get to spend time with Josie’s staff: Gretchen, Fred, Eric, Sasha, and Cara; her friend, Zoe; the reporter for the local paper, The Seacoast Star, Wes Smith, who has the journalistic habits of a yellow jacket; and two cats, Hank and Angela. You also get to meet new people, people who would be our friends if they were real. You’ll meet Lainey, a young and beautiful receptionist, who dreams of becoming an actress; Tom, a handyman, and Julie, a nursing student, a couple who help Josie get her new house in order; Stacy, a stylish entrepreneur; Doug, a single father all at sea; and Maudie, a woman of a certain age, who decides to embark on a new career.

Will you be able to figure out who is the killer? I hope not. If you could, I would not be my mother’s daughter.  My mother once told me that if people have a good enough reason to lie, they tend to be very good at it. And that the people to be most worried about are the people you trust the most—they’re the only ones who can get close enough to do much damage. With a mother like that, are you surprised I write murder mysteries?

As to the anatomy of writing Hidden Treasure: the antiques are in place. I know the setting and the people, their issues laden with desire, danger, and dread. Now it’s up to Josie to use her knowledge of antiques to solve the crimes.

Hidden Treasure tells the story of dreams, desperation, and second chances. I hope you enjoy it.

Enter for a Chance to Win!

Comment below for a chance to win a copy of Hidden Treasure by Jane K. Cleland!

The Hidden Treasure Comment Sweepstakes: NO PURCHASE NECESSARY TO ENTER OR WIN.  A purchase does not improve your chances of winning.  Sweepstakes open to legal residents of 50 United States, D.C., and Canada (excluding Quebec), who are 18 years or older as of the date of entry.  To enter, complete the “Post a Comment” entry at https://www.criminalelement.com/hidden-treasure-the-anatomy-of-writing-antiques-themed-mysteries/ beginning at 9:30 a.m. Eastern Time (ET) December 4, 2020. Sweepstakes ends at 9:29 a.m. ET December 18, 2020. Void outside the United States and Canada and where prohibited by law. Please see full details and official rules here. Sponsor: Macmillan, 120 Broadway, New York, NY 10010. 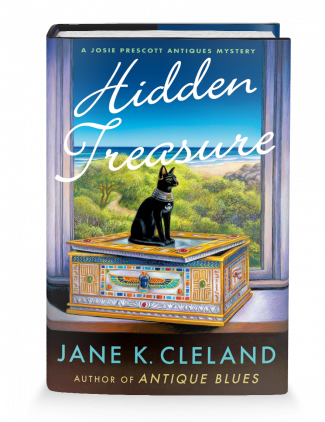 When antiques expert Josie Prescott finds a mysterious trunk, no one thinks it could lead to murder. Josie, the owner of Prescott’s Antiques & Auctions, and her new husband, Ty, have finally found their dream home, a Victorian beauty on the beach known in the town of Rocky Point as the “Gingerbread House.” It was recently vacated by Maudie Wilson, an aging widow, whose concerned nieces have moved her into a nearby assisted living facility. Josie befriends Maudie, who seems surprisingly sharp, considering her family’s doubts about her soundness of mind.

As Josie and Ty joyfully begin renovations on the Gingerbread House, the nieces report that Maudie, in her forgetfulness, may have left behind an old trunk, which she’s desperate to get back. Sure enough, Josie finds the trunk inside a hidden compartment, and within it a jewel-encrusted box holding a sculpture of a cat. Josie can understand the sense of urgency about getting the objects back—they look valuable, and not just in the sentimental sense.

But when Josie goes to return the box to Maudie, the woman has vanished. And on the floor of her empty apartment lies a corpse, a woman bludgeoned to death. Sick with worry for Maudie’s safety, Josie begins to piece together the clues to the murder. Everyone around her seems to want to pitch in, from Maudie’s family, to the receptionist at the facility, to the young couple helping Josie with her renovations, but with the killer so close to home, Josie has to be on her guard.