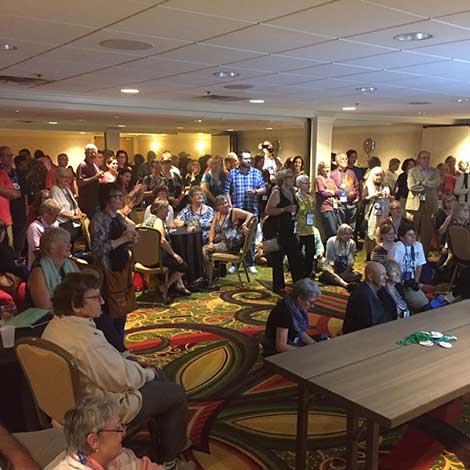 To help celebrate Bouchercon 2016, we teamed up with our pals over at Minotaur Books to help sponsor a collaborative short story penned by a huge collection of their fabulous authors. After nearly 3o authors and an impromptu roast of some of the Minotaur team members, the results were fantastic. But there's one problem: we don't have a title. That's where YOU come in!

What we need is for you to read the short story below and come up with a title. Leave your suggestions in the comments, and in a couple weeks, we'll choose our favorite title.

The winner will not only have the honor of naming their favorite authors' work, but they'll also receive a mega-bundle of books from all of the participating authors! So get your reading glasses out, your thinking caps on, and have at it! (A full list of participating authors can be found underneath the story.)

In a crowded ballroom in New Orleans, where passion and anticipation were as hot and steamy as the air itself, there were dozens of Minotaur authors, ten members of Team Minotaur, hundreds of sweaty guests with dark thoughts and suspicious agendas…and one hidden gun. Hearing of the hidden gun from an alert bartender, the Minotaur team immediately began a pat-down of all guests.

“Ma’am, we’re going to need to bring you into this secondary room for a more thorough interview,” said Hector, smiling.

“Hold on a second, Hector—I don’t think your wife would appreciate that—besides, you’ve had one too many gin and tonics,” said Sarah with a devious grin.

Then, Ann jumped in and said, “Wait a minute! I know his wife and she would be totally okay with it!!!!”

Hector hesitated mid grope. He looked at Ann, longingly, wondering if she had followed through with her promise to tell his wife about them.

Meanwhile, unbeknownst to them all, the giant asteroid headed toward Earth.

Guns seem rather insignificant now, don’t they? Sarah thought. But please don’t stop the patting down, just because….

I am not a real Minotaur, thought the transformative detective seated at the back of the room. But I become one on the full moon. I have only until Friday to find the gun, deter the asteroid, and save the planet.

With all of those things to do, he decided instead to head to the bar for a drink.

Meanwhile, the asteroid was on a collision course with the hotel, and no one was paying the least bit of attention to it…not even the Minotaur detective.

While Hector and Sarah were in the small room adjoining the ballroom, Ann slipped out, cell phone in hand, and called Hector’s wife, Julia, who she had on speed dial. “You’ll never believe what Hector is doing…”

Julia, who had hired the Minotaur, was not shocked, but she was determined to get even. “Where’s the gun?” she asked.

For a moment, as he overheard this conversation, Hector paused to contemplate the nightmarish hellscape that his life had apparently become—minotaurs, asteroids, guns, infidelity, an apparently insatiable new appetite for groping any human regardless of age or sex—and wondered whether perhaps he was the subject of some bizarre and meaningless cosmic game, played by a variety of half-drunk demi-gods.

It was the only explanation for Donald Trump.

Meanwhile…again…as the crowd began to sense something was amiss, the detective decided it was time calm things down, but his trigger-happy adrenal glands let him down…again.

Suddenly, Martin Quinn, the new marketing manager, jumped into the breach, “Forget about the asteroid, forget about the gun, even, please, forget about Trump, but we have real problems: hundreds of crime writers are hoping to cage a free drink!”

What are you saying? Forget Donald Trump? I thought we were solving a crime.

The only crime here is the abomination that is a half man, half horse, said Hector, who was known for his closed-mindedness. He grabbed the gun….

Meanwhile, the bartender who had started it all, realized that he had not seen a gun as reported; it was only a customer who was happy to see him, but he was too embarrassed to say.

Meanwhile. Part II. The lead detective realized that the main clue in this story was that the key suspects were both named Martin. Andy and Quinn. Coincidence?

Ann leapt on the table. She put Julia’s call on broadcast mode: Julia cried, “the beads, the beads, did nobody warn the innocent people in the room about those beads and what they really consist of?”

“Uhmmm… excuse me…” The old woman sitting on the table raised her hand. “Is no one in the fucking dive worried about the asteroid headed our way?”

At least one of the people in the room was praying for the asteroid to hit. “Who the hell thought this was a good idea?” she thought, downing her drink in one go. “Get me the fuck out of here!”

Suddenly, the lights went off and a gunshot was heard. It took Hector a while to figure out he had been fatally wounded, but he managed to utter one final sentence, giving the vital clue to his killer.

So now that you've read what the authors came up with (Don't you just hate a cliffhanger?), it's time for you to help us out by coming up with a title.

Comment below for a chance to win a mega-bundle of all the story's participating authors!

Once Upon a Crime Comment Sweepstakes: NO PURCHASE NECESSARY TO ENTER OR WIN.  A purchase does not improve your chances of winning.  Sweepstakes open to legal residents of 50 United States, D.C., and Canada (excluding Quebec), who are 18 years or older as of the date of entry.  To enter, complete the “Post a Comment” entry at https://www.criminalelement.com/stories/2016/09/help-title-once-upon-a-crime-collaborative-short-story beginning at 7:00 p.m. Eastern Time (ET) September 16, 2016. Sweepstakes ends 6:59 p.m. ET September 30, 2016. Void outside the United States and Canada and where prohibited by law. Please see full details and official rules here. Sponsor: Macmillan, 175 Fifth Ave., New York, NY 10010.