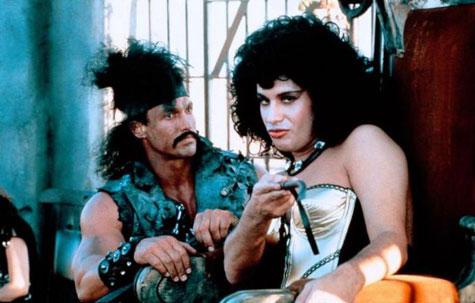 Let’s travel back in time to 1986—a magical time when blockbuster, over-the-top action movies ruled American cinema. That year saw the release of a number of big action movies, including one about a gun-toting, second-generation super spy out to save Los Angeles from an evil terrorist’s scheme to poison the city’s water supply.

Who do you think would have starred in this movie? Somebody like Arnold Schwarzenegger, Sylvester Stallone, or Chuck Norris?

Nope, the answer—believe it or not—is John Stamos! It’s hard to believe, but before he had his big break as the hair-obsessed, catchphrase-sprouting Uncle Jesse in the ABC sitcom Full House, Stamos tried his hand at action movies. The end result was Never Too Young to Die, a cinematic turkey that did not fulfill on its TV-spot promise of turning Stamos into “The Next Great American Hero.” But, the film is an unintentional comedic masterpiece and deserves a much greater following among those who appreciate awesomely bad cinema.

When Never Too Young to Die opens, we're introduced to one of the film’s best characters—the hermaphroditic super terrorist, Velvet Von Ragner, portrayed by legendary KISS bassist Gene Simmons. Simmons's Velvet is sort of a mash up of the title character from Hedwig and the Angry Inch, a Bond villain, and Tina Turner’s Aunt Entity from Mad Max Beyond Thunderdome. That’s because Velvet is a nightclub-singing criminal mastermind who rules a gang of post-apocalyptic-style bikers not with an iron fist, but…a sharpened fingernail. What makes Velvet so enjoyable is the amount of fun Simmons has with the character. He gleefully chews scenes as he berates his followers with all sorts of silly insults. Simmons actually passed up going on tour with Kiss to make the movie, and it's easy to see why.

When we meet Velvet, the character is breaking down their scheme to poison the water supply with a computer disk that allows radioactive waste to be diverted into L.A.'s drinking water for some inexplicable reason. That disc has been stolen by Velvet’s arch nemesis, super spy Drew Stargrove—played by the least famous actor to portray James Bond, George Lazenby. So, Velvet orchestrates a double cross that results in Drew's murder and the audience asking, “Hey, why does Stargrove's fellow agent sound a lot like Gene Simmons?” The answer to that question comes a lot later in the movie, during one of the film's silliest and most over-the-top reveals.

I should also mention that Robert Englund makes a cameo appearance in the movie as Velvet's chief computer programmer/hacker. That leads to a couple of questions:

While we're meeting Drew, we're also introduced to his son Lance Stargrove, who will eventually become our hero. His qualifications to fight evil and follow in his father's footsteps? He's an all-star gymnast…at a community college.

Our introduction to Lance comes via a music montage of him training by jumping on a trampoline. And, warning, that music—the “Stargrove” theme—was written by four different people, performed by Tommy Lee Bradley, and is full of ridiculous lyrics (but it's also catchy as hell). It's revisited many different times and in several different iterations throughout the movie. So, the song will worm its way into your brain.

Lance may be a gymnastics all-star, but his secret weapons for surviving college are his roommate Cliff and Cliff's goofy inventions. In the opening of the movie, Cliff, who is, of course, nerdy and Asian, is introduced in a scene where he's helping Lance cheat on a test with a watch that can send text messages. Cliff's other inventions include a suped-up bike and the Fireblazer, a goofy flamethrower and grenade launcher combination that will factor into the ridiculous way Lance ultimately saves the day in the final moments of Never too Young to Die.

The death of Lance's father brings him into the plot of the movie. He thought his dad worked for an oil company, and when he starts investigating what his old man was really up to, he encounters the film's other main character, Danja Deering, played by singer and Prince protégé, Vanity. The two meet when Lance tries to help her defeat Velvet's chief enforcer, the hulking henchman known as Pyramid. It's hard to decide if he was given that name because of his physique or his gigantic hair. 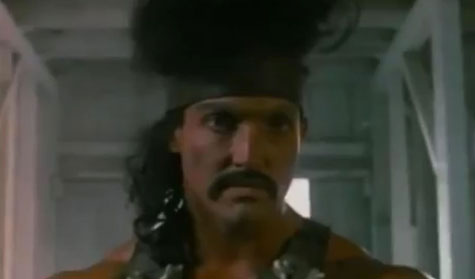 After their initial meeting, Lance starts to follow Danja around on her investigation into Ragner. That leads to some silly moments at a ridiculously over-the-top (in all the best possible ways) biker bar and a generic car chase/gun battle that tries way too hard to force the audience to make the connection between Velvet's goons and the post-apocalyptic marauders of Mad Max 2: The Road Warrior.

In the aftermath of the car chase, two of Velvet's goons try to interrogate Lance about the whereabouts of their leader's missing computer disk by beating him up in the house his father willed to him. Now, up to this point, Lance has been a pretty terrible spy. However, during the course of the scuffle, Lance comes across the Stargrove family crest and, in one of the film's most inexplicable moments, he suddenly becomes both a highly capable fighter and a killing machine. There is no explanation for his transformation from college student to badass. It just happens. It also leads to him and Cliff being able to just indiscriminately mow down Velvet's goons in hails of gunfire.

Lance's transformation into super spy also sets up of the most ridiculous and head-scratching seduction/sex scenes in cinema. It involves bad pop music, fruit, and a garden hose. It has to be seen to be believed.

I don't want to give away too much more of Never too Young to Die because it's one of the movies that you don't expect to live up to the hype that people who have seen it give it, but it does and then some. If you're a connoisseur of awesomely bad cinema you really need to see this movie.

Unfortunately, Never too Young to Die never got a DVD release. In recent years, Stamos has come to embrace the film, and in interviews, he has mentioned that he'd love to buy the rights and show it in theaters and festivals as a midnight/cult movie. Until that day happens, though, you can enjoy Never too Young to Die and all its silly and over-the-top glory in it's entirety for free because some generous soul uploaded the film to YouTube.