May 7, 2020
Kylie Logan is the author of the new book, The Secrets of Bones, the second book in the Jazz Ramsey mystery series following Jazz as she trains cadaver dogs. Join Kylie as she shares childhood memories about her father, a dedicated police officer of the Cleveland Police Department, and see which lessons he imparted to Kylie that lend to her mystery writing now.

In a lot of ways, my dad was larger than life, a kid who was born on a farm to immigrant parents and who eventually moved to the big city where because of the Depression, he never finished high school. He joined the Marines in WWII and his many medals are now proudly displayed on my dining room wall, including the Silver Star he won for gallantry on Tarawa. He joined the Cleveland Police Department in 1946 and retired from it thirty years later as a lieutenant in charge of its Robbery Squad. That’s a lot of years ago and yet in just the last two years, I’ve met one cop who assured me “they’re still talking about Stan” within the department.

He was that kind of cop. The kind who met someone he knew every place we went. I’m sure some of those people were upstanding citizens, but more often than not, they were shady-looking characters, and they didn’t just put up with Dad as a symbol of authority, they respected him. Back in the 50s, Dad arrested one especially high-profile murderer who years after he was out of jail made a name for himself in the world of boxing and always made sure Dad had tickets to the latest match.

Dad was tough, and he was generous. He was dedicated to his family, and no one you’d want to mess around with. After he retired, he took a job as head of security for the Cleveland Public Library and one day when he was going to the bank to make a deposit, he was jumped by two toughs. He shot one of them (not fatally) and beat up the other one, and when the news that night started off with the words, “Senior citizen thwarts robbers” he was highly offended to be considered old.

Yep, having a cop in the family, teaches a lot of valuable lessons:

I’m not out patrolling the mean streets like Dad did, and oh, how I miss going out looking for stolen cars with him, but as I work on the mysteries I write, I like to think that he’s watching over me and assessing and evaluating my fictional detectives’ methods. I think I’m getting it right. After all, I had a great teacher. 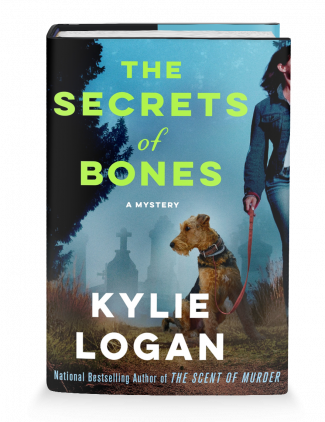 About The Secrets of Bones by Kylie Logan:

Assembly Day at St. Catherine’s dawns bright and cloudless as professional woman gather from all around Ohio to talk to the schoolgirls about their careers ranging from medicine, to NASA, to yoga. Jazz Ramsey has also signed up to give the girls a taste of her lifelong passion: cadaver dog training. Her adorable new puppy Wally hasn’t been certified yet, so she borrows the fully-trained Gus from a friend and hides a few bones in the unused fourth floor of the school for him to find.

The girls are impressed when Gus easily finds the first bone, but then Gus heads confidently to a part of the floor where Jazz is sure no bones are hidden—at least not any that she’s put there. But Gus is a professional, and sure enough, behind a door that no one has opened in ages, is a human skeleton. Jazz recognizes the necklace the skeleton is wearing, and that it belonged to Bernadette Quinn, an ex-teacher at the school who’d quit her job abruptly one Christmas break. But now it seems Bernadette never left the school at all, and her hiding place makes it clear: this was murder.

KYLIE LOGAN is the national bestselling author of The League of Literary Ladies Mysteries, the Button Box Mysteries, the Chili Cook-Off Mysteries, and the Ethnic Eats Mysteries. The Scent of Murder is the first in a new series.