Girls of Brackenhill by Kate Moretti

November 13, 2020
In this gripping thriller from Kate Moretti, a woman consumed by past secrets seeks to discover the truth behind her sister’s disappearance seventeen years earlier. 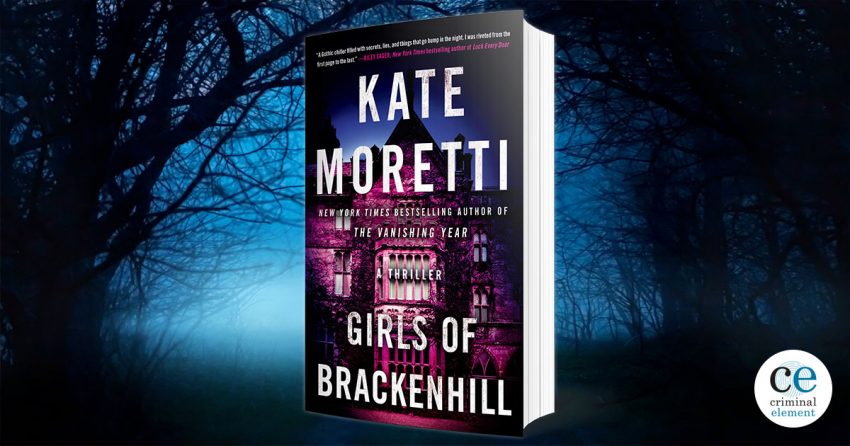 Hannah Maloney spent idyllic summers at Brackenhill Castle in New York’s Catskill Mountains when she was a teenager. They were halcyon days for Hannah and her older sister Julia until Julia mysteriously disappeared. Seventeen years later, she’s lives in Virginia with her fiancé Huck and their boisterous Irish setter Rink. Hannah only revisits her memories of Brackenhill in dreams or nightmares. August 15th, 2019, she gets a call from the 607 exchange in New York: her Aunt Fae has been in a car accident and Hannah must come right away. It’s a six-hour drive. By the time they get to the hospital, Aunt Fae has passed away.

It’s time to return to Brackenhill where Fae’s husband Stuart lays bedridden, his only companion his hospice nurse, Alice. As they drive up Rockwell Mountain Road, Huck is thunderstruck at the sight of the mammoth building. Hannah fills Huck in on her teenage years, something she had assiduously avoided hitherto.

“This house,” she said, her voice wobbly and unsure to her own ears. She began again. Squared her shoulders, stood up straighter. “For five years, we came here every simmer, my sister and I. From the time I was eleven to the time I was fifteen. My stepfather was a drunk. My mother was incapable. Brackenhill was . . . our sanctuary. But something happened to my sister here, and that was the end of it. I was fifteen. Julia was seventeen. She was acting so strangely that summer…” Her voice trailed off, her thoughts winding back to that August: Julia’s bed empty, the sheets cool, the tug of jealousy in Hannah’s core, the girl with the long red hair. What was her name? Evie? Ellie. The new feeling of a boy, the first boy, the weight and smell of him (his name she’d not forget, and she still woke up with it full in her mouth—Wyatt). Wondering if it had all started, or ended, because of a teenage boy who was loved by two girls who happened to be sisters.

“She left one day and never came back,” Hannah finished. “We fought, she left, and I never saw her again.”

“Did she run away?” Huck asked, his voice hoarse, his eyes wide. “Have you looked for her? Now, with the internet?”

Hannah tells Huck that Julia’s purse was found in the river and that she was declared dead years ago. No wonder she never shared her teenage years with Huck. As far as the law is concerned, it’s still an open murder case. Hannah blurts out that she was never asked back to Brackenhill and that she had to move on. Huck is speechless, understandably so. Hannah thinks to herself how strange it must be to be told about such an important part of her life so late in the game.

Huck and Rink go out for a walk down to the river and while they’re gone, Detective Wyatt McCarran and his partner Reggie Plume show up to ask questions about Fae’s accident, noting that there are some inconsistencies. Hannah asks Alice to join the conversation but before the questions can progress beyond the mundane, Alice stands up and says she’s late for another appointment. Then Huck arrives surprised to see the company. Huck is eager to show Hannah what Rink uncovered.

It was, at first glance, a curved piece of wood, jagged in the center and symmetrically bowed on either end. One half was chipped, with a long crack extending from the center to the left side; the other half was smooth.

Huck says it’s “a bone of some sort,” and “the floor shifted under Hannah’s feet.” The detectives tell Julia and Huck that it’s a jawbone and not only that, it’s also human. So it begins, Hannah’s mental journey back to her last summer with Julia, since she’s sure it’s Julia’s jawbone.

She launches her own investigation into that magical summer that ended in a nightmare. As strange happenings plague the castle, Hannah overcovers disturbing details about the past and startling realizations about her own repressed childhood memories.

How will it end well for Hannah to take on the role of amateur detective, riddled with doubts and guilt over her sister’s disappearance? Wyatt would prefer she leave detecting and assumptions to the professionals, especially after a skeleton is discovered on the castle grounds. Things start to get strange. She dreams about Uncle Stuart and Julia, walking into the river, across sharp stones, to embrace her sister. But when Hannah awakes and takes a shower, she looks at her feet: “Caked in dirt and scratched, not deep but surface cuts, painless, thin streaks of blood from heel to ankle. Like she’d been walking in the woods barefoot.” A week or so after her aunt’s memorial service, Wyatt tells Hannah that it wasn’t Julia’s bones that were found. If not Julia, who? Is there more than one dead girl? Wyatt’s questions bring her back to earth.

“Hannah, there’s more.” He kept his eyes down, on his mug, his spoon slowing.” I need you to think back, okay? The years you were in Rockwell and hung out in town.”

He wants to know about Julia’s friends. Any rumors about them. Particularly, if one was pregnant because, as it turns out, whoever was buried at Brackenhill was pregnant. When Hannah gets back to Brackenhill, she fills Huck in on all of the recent developments, and in their subsequent conversation, comes to a shocking realization. Huck has to get back to his clients, but Hannah is determined to stay and get to the bottom of this after years of wondering. The twists and turns of memories and facts continue, as Hannah comes closer and closer to the reality of that long-ago summer. Will the truth set her free or will she be the newest victim of a seeming serial killer. Will she ever reconcile her never-forgotten dream of first love with the reality of her life in Virginia? Perhaps William Wordsworth said it best:

Though nothing can bring back the hour of splendor in the grass, of glory in the flower; We will grieve not, rather find strength in what remains behind.

Girls of Brackenhill is absorbing and unforgettable. Hannah’s journey into her past, bravely uncovering long-repressed secrets and memories, is a tour de force from Kate Moretti. Mysteries featuring historical figures shed light on the times in which they lived. It’s a bonus when the setting is a gorgeous destination. Welcome to Newport, Rhode Island, July 1900. Edwin and Elizabeth Morgan are summering at their Grecian-inspired summer cottage, Beacon Rock, a stunningly beautiful mansion. Emmaline (Emma) Cross and her fiancé, Derrick Andrews,…