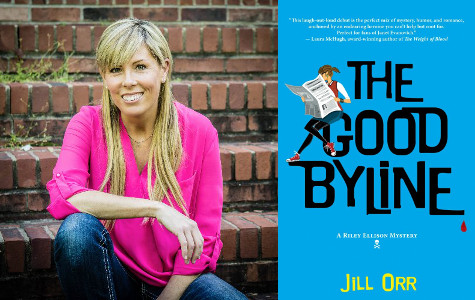 Read this exclusive guest post from Jill Orr about her fascination with obituaries, and then make sure to sign in and comment below for a chance to win a copy of the 1st Riley Ellison Mystery, The Good Byline!

“I wake up every morning at nine and grab for the morning paper. Then I look at the obituary page. If my name is not on it, I get up.” –Benjamin Franklin

Benjamin Franklin isn’t alone. Millions of people around the world choose to start their day by reading about death. Morbid? Maybe. But I’d argue that reading obituaries is one of the most life-affirming pursuits out there—not to mention a great way to gain a little perspective.

The main character in my novel, The Good Byline, is obsessed with obituaries. She reads the obits from eight different newspapers every day, culling through each one looking for those tiny illuminating details of a life well lived. For Riley, this is a way to live vicariously through other people since she isn’t exactly setting the world on fire herself. And, for me, since I wanted to write a murder mystery, the obituary section is a perfect place to find potential victims.

But the idea of writing a character who reads the obituaries as a hobby came from—where else—social media. I was scrolling through Facebook one day, putting off cleaning my house/being productive/talking to actual people, when I saw that someone posted an obituary with the comment: This is the best obituary ever written. Was I not going to click on that? Of course I was! (It was that or fold laundry. This was not a tough call.)

The obit in question had been linked to from a website called Legacy.com—a place where people write and submit obituaries for their loved ones—and it was hilarious, touching, and vivid. When I finished reading it, I felt like I’d known this man, this stranger, who lived in another part of the country and whom I’d never met.

After I read that obituary, I read another, and another, and eventually fell down a rabbit hole of amazing obits. But even more amazing than the obits themselves was the fact that I stumbled upon this entire community of people who read obituaries as a hobby. It’s absolutely fascinating. They even have their own conferences! I had to know more. And so began my own fascination, not so much with obituaries themselves, but with the people who write and read them.

Here are my top 5 reads about obituaries:

The Dead Beat: Lost Souls, Lucky Stiffs, and the Perverse Pleasures of Obituaries

I cannot say enough about how wonderful this quirky little book is. My copy is dog-eared and worn, and every time I pick it up I find a new gem I somehow missed the last time. Marilyn Johnson, a bonafide obituary writer herself, talks about her own attraction to the form as a reader, explores the cultural and regional differences of obituary styles, and profiles many of the great obit writers of our time. Pulitzer Prize-winning writer Jim Sheeler profiles everyday people who lived everyday lives and illustrates through unique details, funny stories, and touching memories that we are all, in our own way, extraordinary. Jim Sheeler has been called “the godfather of obituary writing,” and it’s easy to see why after you read his work. Obit is filled with wisdom, humor, and, above all else, humanity. And on a hilarious note, when describing the audience for whom this book was written, Sheeler said, “Anyone who ever plans to die.”

Life on the Death Beat: A Handbook for Obituary Writers

While this book is certainly what the subtitle suggests, a handbook for obit writers, it is also much more than that. It contains advice gleaned from three of the most accomplished obituary writers working today. I found it more than simply instructive. In detailing what goes into writing a well-formed obit, we learn about those things that remain in the final analysis—the questions, the details, the pitfalls that shape a life and provide the unique perspective that can only be found in hindsight.

by The New York Times

This e-single is a collection of obituaries written by the interminable Margalit Fox, who has written thousands of obituaries for the prestigious New York Times. It includes the final farewells of the Miss Manners of Mo-town, the inventor of Stove Top Stuffing, and NASA’s Mr. Fix-It. But the real treat here lies in Fox’s brilliant prose and the detective-like way that she investigates what it was about each person that made them emblematic of their time. The New York Times is arguably some of the most coveted obit real estate in existence, and Fox never fails to zero in on why her subject’s lives should matter to us all.

I would be remiss if I didn’t include the obituary that started it all for me: the funny, heartwarming, and memorable obituary of Mr. Harry Stamps, written by his daughter, Amanda Lewis. Originally published in Mississippi’s The Sun Herald via Legacy.com, this tribute contains details like, “He never lost a game of competitive sickness,” and “He particularly hated Day Light Savings Time, which he referred to as The Devil’s Time [sic].” It is easy to see why this obit went viral. It does what all the best obituaries do, which is bring a person back to life, if only for a few paragraphs.

Read an excerpt from The Good Byline!

Comment below for a chance to win a copy of The Good Byline by Jill Orr!

The Good Byline Comment Sweepstakes: NO PURCHASE NECESSARY TO ENTER OR WIN.  A purchase does not improve your chances of winning.  Sweepstakes open to legal residents of 50 United States, D.C., and Canada (excluding Quebec), who are 18 years or older as of the date of entry.  To enter, complete the “Post a Comment” entry at https://www.criminalelement.com/blogs/2017/04/get-a-life-my-fascination-with-obituaries-comment-sweepstakes beginning at 2:00 p.m. Eastern Time (ET) April 4, 2017. Sweepstakes ends 1:59 p.m. ET April 11, 2017. Void outside the United States and Canada and where prohibited by law. Please see full details and official rules here. Sponsor: Macmillan, 175 Fifth Ave., New York, NY 10010.

Jill Orr has written features and a parenting column for COMO Living Magazine (formerly Columbia Home) in her hometown of Columbia, Missouri, for more than ten years, and her humor essays are found on her blog, An Exercise in Narcissism. The Good Byline is her first book.