July 20, 2020
Join S. C. Perkins as she explores how family ties are many times at the heart of crime fiction. Read on for S. C.'s list of novels and series where genealogy is key to the character's story, and look for her newest mystery in the Ancestry Detective series from Minotaur Books, Lineage Most Lethal, following Texas genealogist Lucy Lancaster who investigates mysteries spanning from the past into the present, while enjoying a few tacos of course.

No matter the type of crime fiction, familial relationships are often the key factor in understanding why a bad deed is committed. Be it your classic sibling rivalry, a character acting out to get their parent’s attention, or in-fighting between family members or amongst cousins to inherit money, land, a title, or a company, the notion of familial links is strong. These ties serve to make for some of the story’s most complex interactions, and hence, some of the tautest situations and dialogue.

Though as much as we might use the term “familial relationships,” in effect we’re talking genealogy. Who are the character’s people? Their relatives, their kin? What leaf are they on the family tree, and why does that become important? Why is their bloodline or pedigree so all-consuming, either to the character themselves, or to those people whose opinions and actions affect the character? As in the seven books I’m highlighting here, the answers to these genealogical questions are what serve as the roots of the plot and make the dirt that gets thrown (or dished) that much darker. 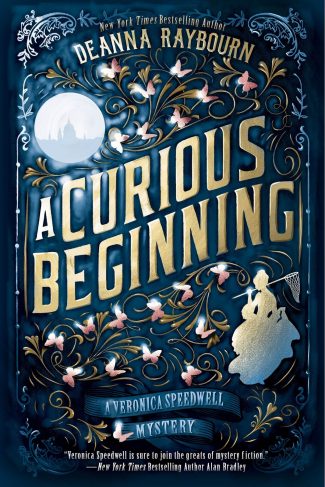 A Curious Beginning by Deanna Raybourn

The first book of this series set in Victorian England and featuring strong-willed, self-sufficient lepidopterist Veronica Speedwell finds her attempting to thwart those who want to keep her from discovering her true ancestry, and those who want her to know so they can exploit it. With the help of a natural historian named Stoker who keeps his past secretive as well, Veronica works to evade her abductors and come to grips with her lineage on her own terms. While the first book delves the deepest into her background, the theme of Veronica’s genealogy continues to course through the series on different levels. 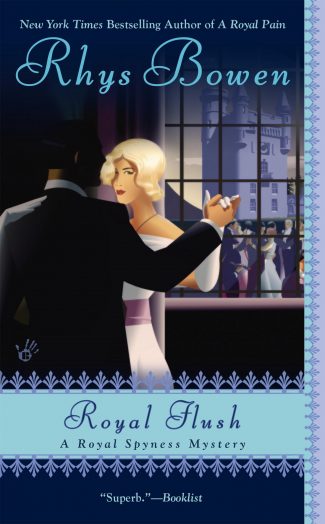 The regal pedigree of Lady Georgiana Rannoch plays out in many ways in this delightful series set in England and other fun destinations during the 1930s—usually serving to help Lady Georgie get either in or out of sticky situations, and definitely complicating her love life. However, it’s in book three in the series, Royal Flush, where genealogy takes center stage when Georgie uncovers the secret family tree behind someone targeting the Prince of Wales.

Fun fact: While the authors didn’t intend it, if their characters were real people, Veronica Speedwell and Lady Georgie would be first cousins once removed. 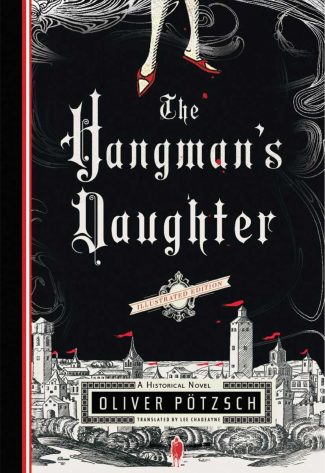 The Hangman’s Daughter by Oliver Pötzsch

Set in Bavaria in 1659, Magdalena Kuisl is not only the daughter of local hangman Jakob Kuisl, but also the granddaughter and great-granddaughter of hangmen as well. When an orphan is found, drowned and tattooed with the symbol a witch, a local midwife is set to be tortured into a confession by Magdalena’s father. However, Jakob believes the midwife to be wrongly accused. Attempting to prove her innocence, the hangman, his daughter, and the physician’s son who is in love with Magdalena work to find the real killer, and encounter an even more frightening enemy in the process.

Fun fact:  Oliver Pötzsch, the author of The Hangman’s Daughter, is a descendant of the real-life Kuisl family of executioners. 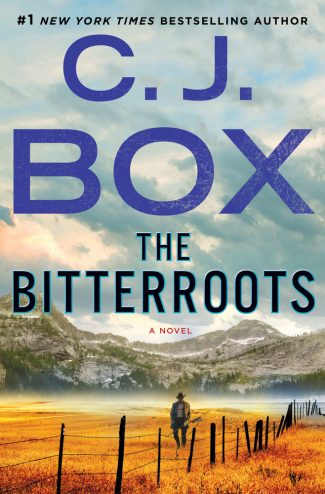 The Bitterroots by C.J. Box

Former investigator Cassie Dewell is asked to look into the powerful Kleinsasser ranching family, who have lorded over their part of Montana for generations. Blake Kleinsasser, the wealthy, entitled, bad apple of the family, has been accused of assaulting his teenaged niece, and his relatives are looking to have him put away for the crime. Though it at first appears to be an open-and-shut case for Cassie, she soon finds unraveling the truth becomes harder since the Kleinsassers have the whole county in their clutches, and their loyalty to their family tree is more twisted and controlling than she could have imagined. 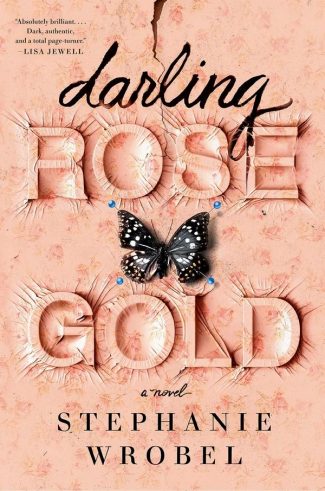 The bond between a mother and daughter are never more tangled than in this thriller set in the fading town of Deadwick, Illinois. Patty Watts spent the first eighteen years of her daughter Rose Gold’s life deliberately making Rose Gold ill her before her daughter’s testimony sent Patty to prison for aggravated child abuse. Five years later, Rose Gold is twenty-three, the mother of a young son, and trying to connect with family members her mother had claimed were dead. When Patty is released from prison, however, Rose Gold allows her to move back in. Though on the surface, the two seem to be willing to mend fences, Patty is out for revenge—but this time her daughter is all grown up and ready to finally cut the ties that bind. 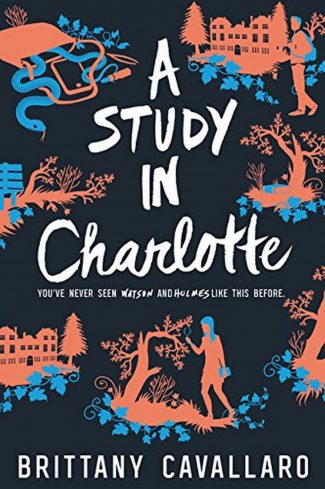 A Study in Charlotte by Brittany Cavallaro

The descendants of the most famous crime-solving duo in literature are the subject of this suspenseful young-adult mystery set at a boarding school in Connecticut. Jamie Watson, the great-great-great-grandson of Dr. John Watson is thrown together with the mercurial Charlotte Holmes, whose three-times great-grandfather is none other than Sherlock Holmes himself. While at first they don’t gel as their forebears did, when one of their fellow boarding-school classmates dies in circumstances that are all-too similar to one of their ancestors’ most infamous cases, the two team up to suss out the truth and solve the case. 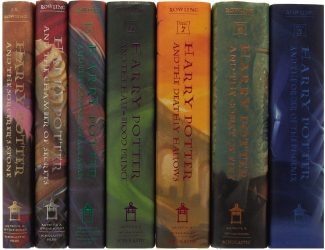 While not usually marketed as a crime-fiction series, J.K. Rowling herself has said her books are “whodunnits in disguise.” Indeed, the series not only has significant aspects of the crime-fiction genre, but the idea of genealogy, bloodlines—purebloods, half-bloods, and “mudbloods,” anyone?—and the emotional ties to family is incredibly powerful throughout the books. In fact, in Harry Potter and the Order of the Phoenix, the Hogwarts gamekeeper sums it up best: 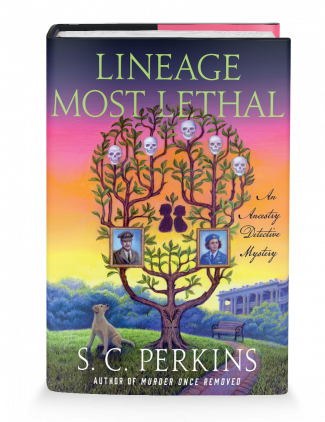 About Lineage Most Lethal by S. C. Perkins:

It’s the week before New Year’s Eve and genealogist Lucy Lancaster is ready to mix work and play at the beautiful Hotel Sutton, enjoying herself while finalizing the presentation for her latest client, hotel heiress Pippa Sutton.

Freshly arrived at the hotel—and determined not to think about Special Agent Ben Turner, who went radio silent on her after one date—Lucy is stopped in her tracks when a strange man comes staggering toward her. She barely has time to notice his weak, sweaty appearance before he presses a classic Montblanc pen onto her hand, gasps, “Keep them safe,” and collapses at her feet, dead.

When Lucy shows the fountain pen to her grandfather, an avid collector and World War II veteran, she’s in for another shock. Not only does Grandpa recognize the Montblanc, he also reveals a secret: he was an Allied spy during the war and the pen is both a message regarding one of his wartime missions and the key to reading a microdot left by the dead man.

On the microdot is a series of ciphers, some decrypted to form names. Could they be the descendants of Grandpa’s fellow spies? When two from the list end up murdered—including the chef at the Hotel Sutton—and Grandpa’s life is put in jeopardy, Lucy’s sure she’s right. And with Lucy’s and Pippa’s names possibly on the list, too, she’s got to uncover the past to protect those in the present.

With a secret Allied mission, old grievances, and traitors hiding behind every corner, Lucy must use her research skills to trace the list’s World War II ancestors and connect the dots to find a killer in their midst—a killer who’s determined to make sure some lineages end once and for all.