Join Joe Brosnan as he reviews the Season 8 Premiere of Game of Thrones and plots his risers and fallers of the week. 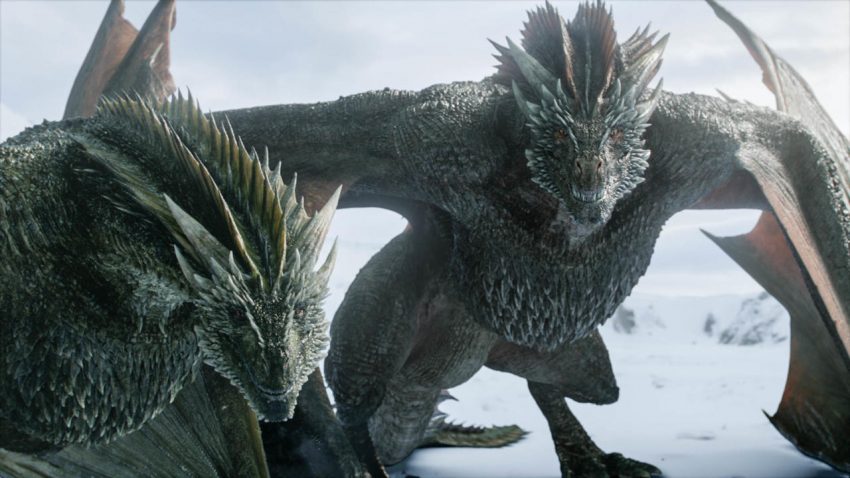 Odds are, if you took a look at social media yesterday, you would have seen someone gleefully basking in the shine of a Very Good Sunday. Tiger won the Masters. Playoff Hockey and Basketball aired throughout the day. And, as Shake Shack, Nabisco, Adidas, and every other brand under the sun reminded us, Game of Thrones was returning. It was a Sunday for the ages, they rejoiced. A Sunday unlike any other. Well… any other since Breaking Bad ended. Or Mad Men bought the world a coke. Or The Sopranos faded to black. Truth is, Sundays used to always kick ass. But for the last two years, which to Thrones fans, seemed to progress as quickly as the Night King’s army, we’ve been left to deal with #SundayScaries without any television weapons to fight back with.

People don’t watch television like this anymore. We don’t all collectively turn our phones to Do Not Disturb and simply sit back. That’s what the movies are for. (And who even goes to those anymore?) No, instead we stream, or DVR, or wait until Netflix gets the new season. We might all still watch the same shows, but we watch them on our own schedule. And because of the overwhelming amount of shows at our fingertips, that’s okay. We always have something to watch. But as these next six weeks will show us, Thrones gives us something to watch together. The Era of Appointment TV is dying. It has six weeks to live. How about we give it one hell of a sendoff?

Alright, now onto “Winterfell,” the very last Game of Thrones season premiere we’ll ever get. As we’ve grown accustomed to in past seasons, when the credits finally rolled, the table was officially set and the final game was afoot. My favorite thing about this episode was the way the writers mirrored it to the very first episode of Thrones. As Daenerys and her army arrive in Winterfell, we’re transported back to the pilot—to a time when Jamie was still blonde, when Bran was still walking, when Hodor was still Hodoring, and when King Robert was just arriving. By opening the episode here, it allows us to look back and remember where we came from. Remember the destruction and chaos in our wake. And remember that the North remembers, because as Daenerys soon learns, there is certainly no red carpet being rolled out.

So while Daenerys spends the rest of the episode reminding everyone she’s the Queen, we’re treated to a series of reunions, some beautiful (Arya and Jon, and later with Gendry) and some nauseating (Cersei and Euron). It was the last scene, however, that left us with a tease for the most exciting reunion, and it plays right into the episode’s theme of mirroring the pilot: Bran and Jaime. Things have changed quite a bit since Jaime sent Bran flying out of that tower window, and while I think the showrunners want us to think that the Starks will seek revenge on Jaime, my bet is on Bran defending him in next week’s trial, knowing that Jaime has a much more important part to play in the war to come.

Riser of the Week: Sam Tarly

I can’t say enough good things about Sam Tarly and his growth throughout the show. Just think of the bumbling, doughy boy who we first met at Castle Black in Season 1 and compare him to the steadfast, doughy man who stands before us. Sam has killed a White Walker, politicked to get Jon Snow elected Lord Commander of the Night’s Watch, saved Gilly and her baby, fought to defend Castle Black, unearthed the secret abilities of Dragonglass, studied at the Citadel, saved Jorah’s life, and not only learned the truth about Jon Snow’s parentage, but also unwaveringly told Jon the truth. The best line of the episode came from Sam in the crypt when talking about Daenerys: “You gave up your crown to save your people. Would she do the same?”

Ever since Jon and Daenerys got it on in the Season 7 finale, I expected these last six episodes to show them falling further in love and uniting to save the realm. But now, I’m not so sure that’s the case. Jon is truly a selfless, if not reluctant, leader. He just wants to save the people. If Jon starts to think Daenerys isn’t cut out for the job, which I suspect he will, how will he play his hand? Perhaps the writing has been on the wall all along… or at least since Season 2 when Cersei said “Half the Targaryens went mad, didn’t they? What’s the saying? ‘Every time a Targaryen is born, the gods flip a coin.'”

Now that we have two Targaryens, is it safe to say one of them is mad? If so, it’s likely not Jon.

Honorable Mention: Bran Stark, for being aware that there are only six episodes left and saving us hours of superfluous backstory and urging everyone to just get to the point.

Daenerys seemed to think simply showing up with two dragons in tow would be enough to win over the North, but from the terrified townsfolk fleeing beneath the dragons to Sansa’s territorial side-eye, it’s clear there will be no welcome wagon. Luckily, Jon is on her side for now, but how she reacts to the news of his lineage will go very far in determining how things play out for her. One thing that can’t be overlooked is her execution of Sam’s dad and brother. Executing people for fighting on the other side of a war is a lot different, and perceptually worse, than executing mutineers or insurgents. When Jon executed Janos Slynt or hung the Night’s Watchmen who planned his assassination, that seemed justified and was received with understanding. But compare that to Robb Stark’s beheading of the head of the Karstark family. That was rightfully perceived as overkill—a tone-deaf move that was an unnecessary killing in a war already rife with death. Thus far, Daenerys has handled executions more like Robb than Jon, and make no mistake, that’s a bad thing. Sam’s already planted the seed of doubt in Jon—how quickly will it grow?

Honorable Mention: Euron Greyjoy, for choosing to secure his hostage and his boats with incompetent men. Theon got in and out way too easily.

Backstory of the Week: Harry Strickland, Commander of the Golden Company

Normally, the introduction of a new character is commonplace in a Game of Thrones episode, especially in a season premiere, but with only six episodes remaining, there’s isn’t much time left to hand out to newcomers. So when some of our precious screentime was given out to Harry Strickland, it seemed like a good use of time to properly introduce him.

Four generations of Stricklands have served in the Golden Company, and Harry (at least in the books) recently took command of the company.

In the books, Harry is consistently characterized as lazy and ill-suited for battle. Prone to blisters and reluctant towards long marches, he struggles to motivate his troops. We didn’t get enough from Harry in the show to determine if he’ll be written the same way, but if he starts complaining about his tiresome feet, don’t be surprised.

After Arya and Gendry finished with their banter, Arya presented him with blueprints for a new weapon, and while we only were given a quick glimpse at the schematics, it’s easy to get excited thinking of how she’ll use it. The weapon appears to be a double-edged staff with a dragonglass spear on one end and a blade on the other. Could it be the Valyrian steel dagger on the other end? Or just a traditional blade? Either way, after watching Arya train with a staff for many seasons, the idea of watching her waterdance her way through the Army of the Dead is as exciting as it gets.

Thanks again to all of you who read this, share this, and get excited about this. I’m never more popular than I am during a Game of Thrones season. So here’s to these next six weeks. And here’s to riding out the winter together.

Before we get into the finale, I want to spend some time appreciating the phenomenon that is Game of Thrones. I don’t think it’s hyperbole to say it changed my life. I’ve built friendships around it… And drinking games. I’ve spent countless hours discussing theories and what-ifs. And I’ve been lucky enough to share my…

As Game of Thrones stumbles to the finish line, I find myself repeatedly coming back to a quote from the series finale of The Office when a profound Andy Bernard says to the camera “I wish there was a way to know you’re in the good old days before you’ve actually left them.” Boy, did…