Game of Thrones Season Finale 7.07: “The Dragon and the Wolf” 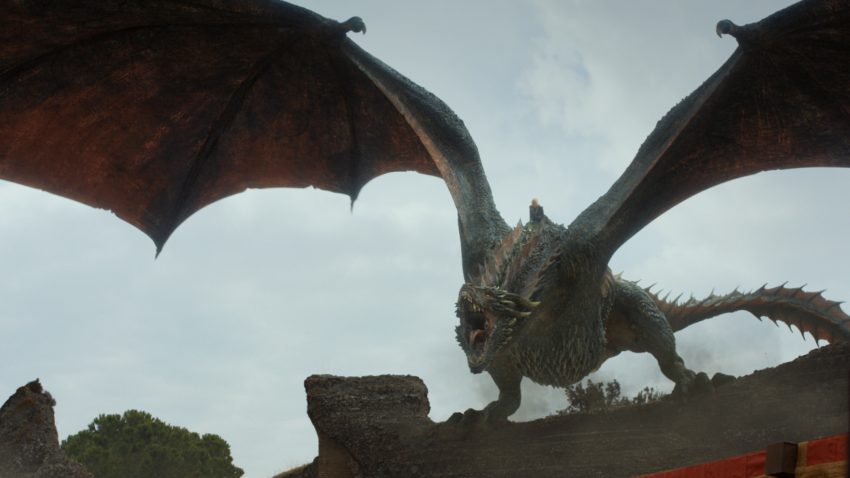 Move over Red Sox – Babe Ruth has officially been dethroned and a new “Worst Trade Ever” champion has emerged. When you boil it all down, Daenerys and Jon traded a dragon and the goddamn Wall for a one-handed Jaime Lannister. They didn’t even get Bronn in the deal!

As the snow settled in the south, it grew clear just how ill-prepared the realm is for war with the White Walkers. Cersei is content to let her two enemies battle it out – a move that, while easy to ridicule, really does give her the best shot of remaining on the throne.

Daenerys and Jon know who the true enemy is, but they have no idea about the Night King’s new pet dragon. Yes, Daenerys still has two of her own, but it’s hard not to imagine another one of her dragons dying, and probably soon. And worse, if one does die, it will then likely be reanimated by the Night King, giving him even more of an upper hand.

Moving on from the Great War to Come, there were plenty of smaller moments scattered throughout the episode. We were treated to wonderful acting all around, especially from Lena Headey, Alfie Allen, and Aiden Gillen. Cersei is officially alone and untethered, a frightening notion. Theon died ages ago in the dungeons of the Dreadfort, and he was reborn on the beaches of Dragonstone. He’s headed to Pyke to rescue Yara, but he won’t find her there.

This entire season I’ve complained about the Theon storyline and the unimportance of it all, but it looks like there is still hope. When Theon arrives at Pyke and finds no sign of Euron, he’ll be able to get word to Jon, and that should tip them off that Cersei has no plans to uphold her end of the agreement. This should also align with Jaime’s arrival – giving him proof that he has, in fact, abandoned his sister’s side and wants to protect Westeros.

We also concluded our Winterfell storyline in the same way it developed all season – drawn out and illogically. Season 7’s Winterfell storyline is akin to Season 5’s Dorne. It was botched, its characters were written sloppily into corners, and a lazy death was the only way to make amends. With everyone important seemingly en route to Winterfell, here’s hoping for some improvement in Season 8.

You have to give it to Game of Thrones. It’s the only show capable of making its fans celebrate some good, old-fashioned incest. It turns out that Jon Snow is actually Aegon Targaryen VII – the lawfully birthed son of Rhaegar Targaryen and Lyanna Stark. Now, we fans have known this – at least in some capacity – for a while now. But now other characters are finding out, and it won’t be long before Jon learns it himself.

But that’s not why Jon is this week’s riser. He’s here for the simple fact that he’s completely won over – and under – Daenerys. Throw in the fact that a pregnancy seems possible – a hat tip to Davos and his fermented crab might be in order – and it’s only a matter of time before they wed. I guess we better start thinking of a wedding hashtag.

Faller of the Week: Petyr Baelish

It’s no secret that Littlefinger is my favorite character. In a world built upon the arches of chaos, Littlefinger was the keystone. You never knew where he’d turn up or who he’d turn on. He thrived on turmoil and flourished on disorder. He was every bit the master, and he’ll forever be my favorite. But I ask that you don’t remember the Littlefinger we’ve been force-fed these past three seasons. Remember early Littlefinger – the one who was never fully evil but forever morally gray. The one who killed a king just because he wanted to see what would happen next. That’s the Littlefinger I’ll remember.

I want to be mad at the show’s writers for ruining such a nuanced character. When Book Baelish pushed Lysa out the Moon Door, he had a contingency plan and escaped persecution due to his own foresight. In the show, he needed Sansa to save him. Book Baelish also never handed Sansa off to Ramsay Bolton. Instead, he’s remained with her in the Vale, looking over her and attempting to secure her marriage with the young man who stands to inherit the Vale when Robert Arryn inevitably dies. When Ramsay died last season, the showrunners needed a stock villain in the north, and due to the butchering Littlefinger had endured these past few years, it was all too easy to simply paint over his grayness with black.

But I can’t be too mad. If anything, it proves how right I was in choosing to support Petyr Baelish. And I look forward to the smart, ambiguous, and less pervy Littlefinger that will return when The Winds of Winter hits shelves in 2025. I don’t doubt he’ll meet his end at some point there too, but I guarantee it won’t be at the hands of sloppy writing and a lack of due process. Rest in peace, Lord Baelish. You’ll get to climb your ladder again sometime soon.

Honorable Mention: Tyrion Lannister, for orchestrating this whole mess of a season.

Backstory of the Week: The Golden Company

Last night, we learned that Cersei, flush with Highgarden gold, has employed Euron Greyjoy to sail east in order to purchase the support of The Golden Company – a group of sellswords considered to be the largest and most famous, as well as the most expensive. We hadn’t been introduced to the Golden Company in the show, but they’re a bit more fleshed out in the books.

The Golden Company was founded by Aegor Rivers, aka Bittersteel. Aegor was a legitimized bastard of King Aegon IV and half-brother to Brynden Rivers, aka Bloodraven. During the Targaryen civil war, the Blackfyre Rebellion, Aegor took up arms against King Daeron II. When it became clear that the Blackfyres would lose, Aegor (and his Valyrian steel sword) fled east and settled in Tyrosh. One year later, he founded the Golden Company.

While most sellsword companies are notoriously unreliable, the Golden Company has a trustworthy reputation, having allegedly never broken a contract. Aegor died in battle many years ago, but he is immortalized by the company’s motto: Beneath the gold, bitter steel.

And so it seems like The Golden Company will be returning to Westeros. But what will be waiting for them when they arrive?

So it seems like all those southern lords had the right idea this whole time: just leave the wildlings alone and the Wall will keep everyone safe. The Wall, which has stood for thousands of years, finally fell, and only because Jon and Daenerys hand-delivered a dragon to the Night King. If you look hard enough, you can see Cersei smirking all the way from King’s Landing.

Okay, I could go on all day, but it’s time to wrap up. I don’t think I’ll face any flack for arguing that this wasn’t the best season of Game of Thrones. The plotting felt rushed, and the decisions many characters made seemed downright dumb. But this season’s job was to get us to the final bend, just short of the finish line, and in that, it succeeded. Everything is in place. Groups have aligned. The ladder is standing. And chaos still reigns supreme.

See also: Game of Thrones 7.06: “Beyond the Wall” Episode Review