Game of the Gods: New Excerpt 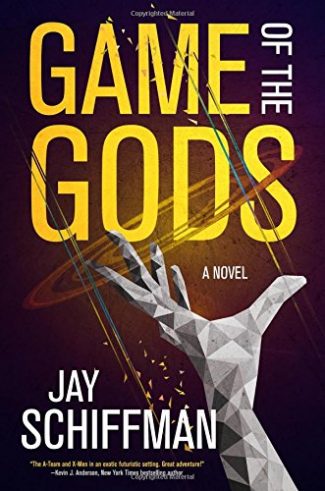 Game of the Gods

Jay Schiffman’s Game of the Gods is a debut sci-fi/fantasy thriller of political intrigue and Speilberg-worthy action sequences in the vein of Pierce Brown’s Red Rising.

Max Cone wants to be an ordinary citizen of the Federacy and leave war and politics behind. He wants the leaders of the world to leave him alone. But he’s too good a military commander, and too powerful a judge, to be left alone. War breaks out, and Max becomes the ultimate prize for the nation that can convince him to fight again.

When one leader gives the Judge a powerful device that predicts the future, the Judge doesn’t want to believe its chilling prophecy: The world will soon end, and he’s to blame. But bad things start to happen. His wife and children are taken. His friends are falsely imprisoned. His closest allies are killed. Worst of all, the world descends into a cataclysmic global war.

In order to find his family, free his friends, and save the world, the Judge must become a lethal killer willing to destroy anyone who stands in his way. He leads a ragtag band of warriors―a 13-year old girl with special powers, a mathematical genius, a religious zealot blinded by faith, and a former revolutionary turned drug addict. Together, they are the only hope of saving the world.

The guards open the door to my chambers and usher in a girl, eighteen years old, smelling like urine. Fresh blood is dripping from her nose. Her hair is dyed neon green. I tell the guards to leave. I hand the girl a cloth for her nose and tell her there’s a change of clothes in the bathroom. I’ve gotten used to the fact that teenagers’ nerves get the best of them. The Federacy tried to remove the biological impulse to empty our bladders when scared. But nature’s a stubborn thing.

What I can’t get used to is that so many candidates think they can seduce me. They come out of the bathroom naked—begging with their bodies. Dariox is no different. The second she slithers out with her top off, I force a fatherly smile and guide her back to the bathroom. She sobs on the other side of the door, knowing she has probably just made a terrible mistake. I try to convince myself it will not impact my evaluation.

I ask Dariox a question. After years of evaluating candidates for citizenship, I almost always know the answer before I ask. “Why do you have a bloody nose?”

“A rock from the border,” she says. “I volunteered with the Civilian Brigade to monitor the Nyton Border Post and a protester threw rock at me.”

I don’t want to embarrass her and call out the obvious lie. This is her last year to become a citizen and each year her performance gets more and more desperate. Last year she told me she could see the future. She claimed she predicted the riots in the Azarks. For this year’s encore, she decided to slam her face into a brick wall and pretend to be a Federacy patriot.

I am so incredibly important, in fact, that the Federacy’s Premier and secretary of war buy my children birthing-day presents. I am so important that I travel with ten guards, three of whom are hardwired with detonators. My guards are trained to blow themselves up if it will save my ever so important life.

Although Dariox has little chance of becoming a Federacy citizen, I try to give her a fair hearing. It’s her last chance and she deserves whatever negligible amount of justice I can dispense. I take Dariox’s hand in mine. This is a technique I learned as a young judge. It comforts the candidates and makes it easier for them to be honest. I ask her dozens of specific questions and it doesn’t take long before her pile of lies can no longer withstand their own weight. I bite my lower lip, no longer knowing if this is empathy or affect.

“This is your last year, Dariox. I think you attempted the citizenship process as best as you can. But each year I recommend, above all else, that you come back next year demonstrating your character—the character of a Federate. Unfortunately, each year you return my advice with dishonesty.” I look out the window and see a small government building on fire in the distance. It looks too small to be the work of the National Freedom Force (NFF). It must be rioters. “No more lies, Dariox. I simply want you to tell me a story about yourself. Don’t think about its meaning or how it will impact my decision. All I ask is that it be true.”

Dariox looks around the room as if looking for her life’s story. The walls are blank but for fourteen plaques—plaques I am legally required to hang—celebrating the fact that for all fourteen years of my service, I have had the highest efficiency rating of any judge. How so very proud it makes me to see these plaques celebrating how so very important I am.

THE TRUEST OF FEDERATES.

“You won’t find anything at all on these walls, Dariox.” I take my finger and point to her heart, then her head. “The story I want is here and here.” It’s trite, but surprisingly effective.

Dariox has a number of false starts before she launches into a story about how when she was young she wanted nothing more than to be a Federate soldier. Her story, at turns riveting and at turns pathetic, is a direct outgrowth of our educational system’s schizophrenia. On the one hand, we teach our young children to have character. The slogan above every education center is:

Dariox’s story, like so many other candidates’, is deeply symptomatic of our education system’s split personality. I let her spin her tale for about five minutes before becoming frustrated. “No, Dariox—I want a true story. I’m trying to save your life, for God’s sake!” Any other judge would have assigned her to one of the most miserable settlements in the Outer Regions by now.

Dariox snaps. “Fuck you,” she yells. She pounds her fist on my writing table. “Go fuck yourself—you hypocrite. I’m just trying to survive.” I try not to smile, but I can’t help it. For the first time, I believe her.

“Should I tell you how much I hate the fucking Federacy? Should I tell you that if I wasn’t so scared of being raped again or captured by mercenaries or strung up by the Rogues that I would never want to be a citizen? Is that what you’re looking for?”

I sit back in my chair, satisfied at having won the battle for truth but sad for having heard it. I look out of my window and see three ambulatory transports hovering over the burning government building while suctioning out lives. I put my arm around Dariox and walk her over to the window. “What do you see out there, Dariox?”

“And who’s to blame for that?”

Dariox pauses to think. Lies easily roll off her tongue. The truth, however, is a sticky mass. “I don’t know—the NFF, the Rogues, the Nation of Yerusalom? I don’t know, maybe the Federacy.” She removes my arm from her shoulder and thinks some more. “Actually, maybe you—maybe you’re the one to blame.” Her nose is again bleeding and I go to wipe it, but she pushes my hand away. “You’re a good person, right? That’s what every single Federacy paper says. Max Cone, the Highest Judge, is a man of character, a true Federate. And you were this great military commander before that. You’ve got all this power and you do absolutely nothing.”

She wipes the blood from her nose on her sleeve and looks up at me. “I think I’ll blame you!”

After I dismiss Dariox, I call in a handful of my clerks to record my decision and file the appropriate documentation. I deny Dariox citizenship. She is smart and passionate—traits I greatly admire. But citizenship is strictly limited and she does not exhibit the character of a Federate. In my professional view, she never will, and maybe that’s not a bad thing. I dictate a lengthy outline for my decision, and my clerks fill in the details. Though I cannot assign every rejected candidate to a relatively safe place on the borders of the Federacy, I do for Dariox. She has earned that right, in my opinion.

I leave work just after nightfall. It has been a long week. The Federacy has sustained thousands of casualties at the hands of the NFF and the Rogues, and there are rumors circulating that the Premier is going to ask me to reassume my role as the high commander of the Federate Forces, a request I will have no choice but to refuse. I will never fight for these people again.

My guards open the door to my transport and I am home in fifteen minutes. My two boys greet me at the door and my little girl, Viole, follows close behind. They squeeze me tight, and for a brief moment, I feel something other than numb. Viole wiggles her stuffed bear in my face and pretends to be the bear. “Did you have a good day?” the bear asks. I nod yes—a lie my little girl deserves. My children are my only happiness.

I walk down a long hallway and see my wife staring vacantly out the window watching the owl that lives atop the lone tree in our backspace. I spin around her wheeled chair and kiss the top of her head. As she struggles to squeeze out a smile, drool runs down her cheek. I take out a cloth and wipe it dry.

Jay Schiffman is a writer and entrepreneur committed to creating socially responsible businesses. He has started a number of successful companies in entertainment, education, and technology, including an entertainment studio dedicated to developing unique digital content for the public sector. His studio creates award-winning apps, games, digital stories, and animations for public interest organizations, educational institutions, and governmental bodies. Prior to starting his businesses, he was a practicing attorney, taught political science at N.Y.U., and worked in the public and private sectors. He lives in New Jersey with his wife and children. Game of the Gods is his debut novel.