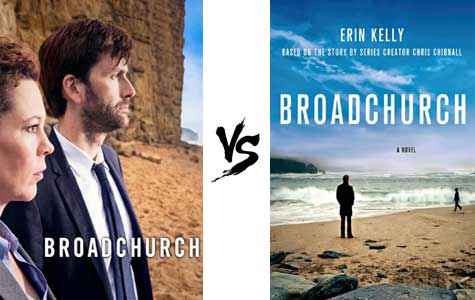 This should actually be called Screen to Page, since the television series came before the book. The show is a BBC production. One murder case is investigated over the course of eight episodes.

Ellie Miller has just returned from a three-week holiday with her family. She’s expecting to step into her new role as a Detective Inspector on her first day back at the Broadchurch police station. Instead, she’s introduced to DI Alec Hardy, who has been brought in while she was gone. Before Ellie can get into it with the big boss, she and Hardy are called out to investigate a report of a body on the beach.

The boy is Danny Latimer, the son of Ellie’s best friend and the best friend of Ellie’s son Tom. Danny’s been strangled. And it’s up to Hardy and Miller to figure out which one of the small town’s citizens could have done it.

The show kept me riveted week after week. Not just because David Tennant plays the lead, although it certainly didn’t hurt. And not just because I’m a sucker for British mysteries and police procedurals of all kinds.

This particular procedural concentrates on Hardy and Miller, but also follows members of the Latimer family, the vicar, local news agent, and several other members of the community. The book, from Erin Kelly, does the same.

Everyone involved in the production does a wonderful job of showing how supporting and suffocating a small town can be. What at first is a coming together soon turns into suspicion and finger-pointing. Slowly, secrets are revealed. Secrets that may or may not have anything to do with Danny’s murder.

The book also changes point of view to good effect. By doing so, the authors avoid a lot of exposition. We get to “see” what each person is doing. Up to a point. Secrets and motives are doled out—in both formats—with great misdirection.

But the best part of both the show and the book is the relationship between Hardy and Miller, especially as Hardy’s past, and his own secrets, are slowly revealed. There is a nice evolution in the relationship that feels real. Plus, for me at least, I liked that there was no hint of romantic or sexual tension between them. They’re partners who have been thrown together, but who might become friends one day.

The book gets to explore more of the personal lives of the inhabitants of Broadchurch. Details that give more explanation as to the reasons certain people behave in the ways they do. Reasons for keeping secrets, even when keeping them could hinder the investigation of a young boy’s murder. I liked the depth it gave to Liz, the editor of the local newspaper. Ollie also gets a fuller back story. He’s Liz’s reporter and Ellie’s nephew. Another nice touch in both the show and the book.

I have to call this one a tie. Even with David Tennant on the side of the screen version. As much as I love his Scot’s burr, I had to pause and rewind several times to figure out what he was saying. And I could still hear it while reading the book, but without rewinding.

Gracepoint, the Americanized version has already debuted on Fox. I’ll be watching it all, both out of curiosity to see if it stands up to the original and, say it with me, David Tennant. Yep, he’s reprising the roll here in the States. With a sort of American accent. Ever notice how British and Scottish actors tend to go nasal when playing Americans?

A second series, as they are called across the pond, of Broadchurch is under way for the BBC. Tennant and excellent costar, Olivia Colman, are returning as Ryan and Miller. Can’t wait to see if they remain in Broadchurch, which would be really interesting after the events of the first series, or if they both end up in another town.

One can only suppose that there will be another book as well. I’m pretty okay with all of it. If the parties involved can keep the quality going, I’ll go right along with them.