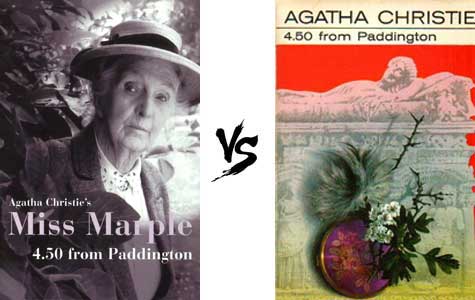 I read the Agatha Christie's book version of 4:50 From Paddington way before I saw the TV-movie, directed by Martyn Friend. I was most likely in my late teens or early twenties when I read it. That was the time I went on a huge Agatha Christie binge. I read as many of her books as I could find. Fortunately, it wasn’t too hard to find them between the local library and my big sister’s bookshelves.

This particular story finds an aging Miss Marple being visited by her good friend Elspeth McGillicuddy, who tells the amateur sleuth a fantastic story. While the train she was traveling on to get to St. Mary Mead slowed to allow another train to pass, Mrs. McGillicuddy witnessed a man strangling a woman. Miss Marple believes her old friend, even though authorities turn up nothing. And though she can’t physically carry out the investigation, Jane Marple enlists the help of Lucy Eyelesbarrow, an Oxford-educated, freelance domestic servant. She is much sought after by ladies who want the best and like to impress. Lucy is dispatched to the Crackenthorpe estate, the only place on the train line where a body could have been disposed of without being found soon after. She is to assist the remaining daughter of the house with various domestic chores and with taking care of the cranky, ailing patriarch, while looking for the body.

Two of my favorite characters in the book are Alexander Eastley and James Stoddart-West. Pre-teen boys on school holiday. Alex is the son of Bryan Eastley and the late Edith Crackenthorpe Eastley. The boys have a delightful time eating everything in sight and helping Lucy look for clues.

During my most recent reading, I was struck by several things. The first is that none of the trains discussed actually leave Paddington Station at 4:50. A small detail, but it still bugs me.

The second is that Miss Marple, for being the protagonist, appears in a rather small portion of the book. She believes her friend did witness a murder, she hires Lucy Eyelesbarrow to do the leg work for her and Miss Marple, of course, solves the whole thing. The third is the big role Lucy Eyelesbarrow plays, given Miss Marple’s being a bit sidelined. It made me wonder if Christie was considering spinning Lucy off into her own series. I’ve found nothing to back up that idea, but it would make sense. Miss Marple would be about sixty-six in this book, based on ages for the character mentioned in a few other books. And Lucy’s rather a handy amateur sleuth herself. The freelance domestic servant angle would put her in a lot of different situations where murders could take place. She’s really smart…

The movie, filmed as part of the BBC’s Miss Marple television series in 1987, had the same tone and over plot as the book. Of course, there were a few differences. The change in format pretty much demands it.

Miss Marple is much more visible in the movie. Even with Lucy doing the hands-on work, Aunt Jane—as she is introduced—shows up at the Crackenthorpe estate on several occasions. The on-screen Miss Marple doesn’t put on the fluttery, fluffy old lady act she does on the page. I can’t say I missed it.

The two young boys don’t figure as much in the movie version. I guess it makes sense when there are so many characters to keep track of and nobody suspects them of having strangled the woman, but they added such a note of enthusiasm, innocence and macabre curiosity. It was a nice juxtaposition when viewed against the personalities of the other family members.

Although Lucy receives fewer marriage proposals in the movie, there is a stronger focus on romance. Not only for Lucy, but for Emma Crackenthorpe as well.

And everything at the estate seems to happen in one long weekend. There are a lot more comings and goings in the book.

There is nice misdirection in both versions. Christie always supplies the clues, but she is a master at drawing attention to the ones that don’t pan out.

I found the satisfaction level fairly equal in the book and the movie. Either one will give you a nice little puzzle with lots of quirky, earnest, and shady characters to choose from. If you have more time, go for the book. It’s a fast read, as are all Agatha Christie books. The deeper exploration of each character is worth it.

Plus you’ll get to see the kids in action.